This time, before learning more about avoid notes, we will take a look at the incredibly common
“two five (II-V)” chord progression.

This will help add variations to your chord progressions,
and is actually necessary information in understanding the avoid notes for the IIm (IIm7) chord.

Until this point, we have looked at cadences using primary triads,
but of course there are more than 3 chords that are used in music.

In our 28th article, we mentioned that different chords can have similar functions to these chords,
and the primary triads can be switched out with other chords.

These chords that can be used in place of others are called substitute chords.

We will take a look at more substitue chords as we progress along this series,
but we will focus on using the IIm (IIm7) as the substitute for the subdominant IV (IVmaj7) chord in this article.

Lets use the T→SD→D→T progression from our 31st article as an example.

This was a common progression that moved from stability to interest, to tension, and back to safety.

The overall feeling hasn’t changed much, but the chord is different and it has a different
flavor than when the F is used.
This helps explain the name “substitute” behind it’s use.
Try it out in other cadences as well.

If this progression using this substitute chord is displayed in roman numerals, it will look like so.

You may have realised this from looking at the image,
but the area connected in yellow is the “two five” (II-V) progression found in the major key.

The Dominant to Tonic Motion behind the Two Five

So why is this motion specifically called 2 5?

Lets listen to another group of examples for comparison.

They both feel like they are heading towards a climax,
but when paying attention to the root notes (bass notes)
we can see that the second progression had a more powerful movement behind it.

Lets compare the movement of the root notes. 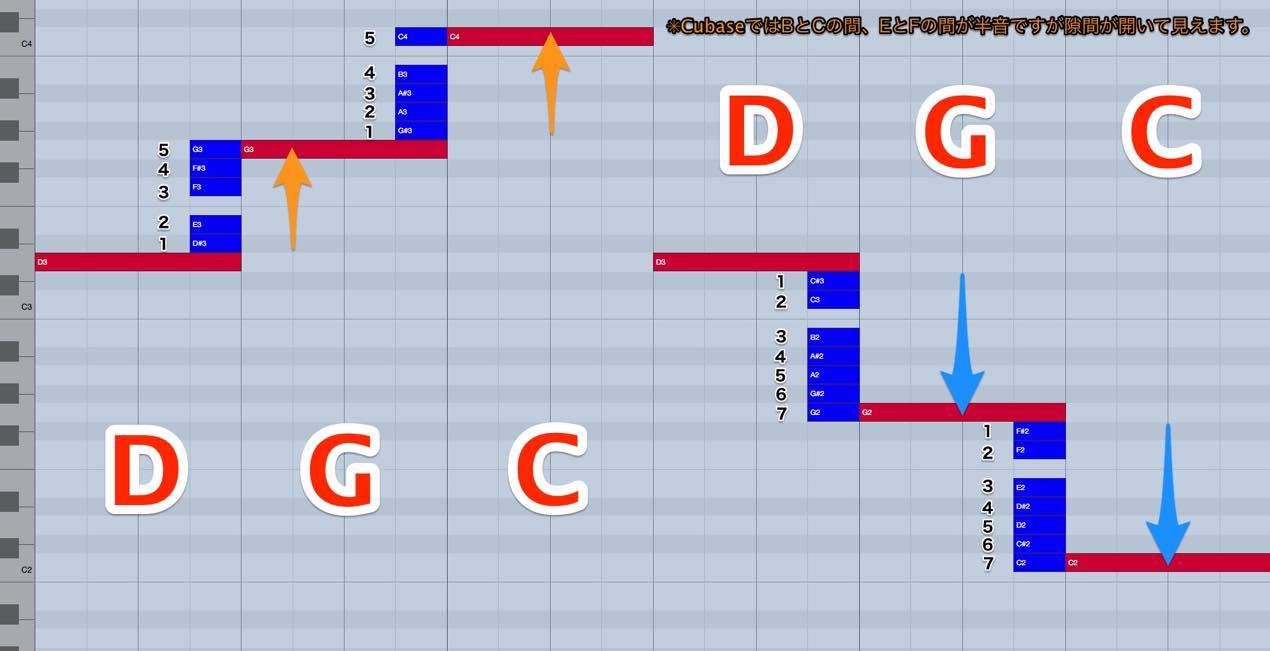 We have seen these root intervals somewhere before.
Thats right, they are the counter-clock wise motion that we looked at in our 6th article on the circle of fifths.

These intervals moved in P4th above (5 half-steps) or P5th down (7 half-steps down) intervals.

Like seen, the root of the chords move in P4th above (5 half-steps) or P5th down (7 half-steps down) intervals, or a sort of
dominant to tonic like motion.

It is a standard movement that creates easy motion in various chord progressions and gives story to a song.

The sample below feature all dominant to tonic style motion.

It has a progression that is very easy to follow.

Technically, G7 to C follows this same interval motion.
Because of this, the movement of Dm7→G7→C (IIm7→V7→I) from above is also known
as the “II-V-I (two five one)” progression.

Using the substitute IIm (IIm7) chord in place of the subdominant to create a II-V progression
is a common technique used in various styles of music.
Of course, the IV→V motion is commonly used as well, so the importance is understanding when to use which to acheive a certain sound.

In our next article we will continue looking at avoid notes again,
so stay tuned!

After moving to the USA at 18 years of age with a scholarship from Berklee, he completed a 4 year study focused on song writing and arranging there.
Using this knowledge, he works across a variety of fields from pop music, film music, and more.