Previously, we analyzed the first half of “Fly Me to the Moon (In Other Words)”, and took a look at secondary dominant chords.
Lets take a look back at how that sounded.

When only using simple chords:

First we will prepare the diatonic chords of c major with spaces between each as shown in the image.
This time, we will be looking at the triads+1 note, or the 7th chords.

Lets first take a look at the crucial V to I resolution movement.
Because we are only in the key of C major above, this would be the G7→Cmaj7 movement. 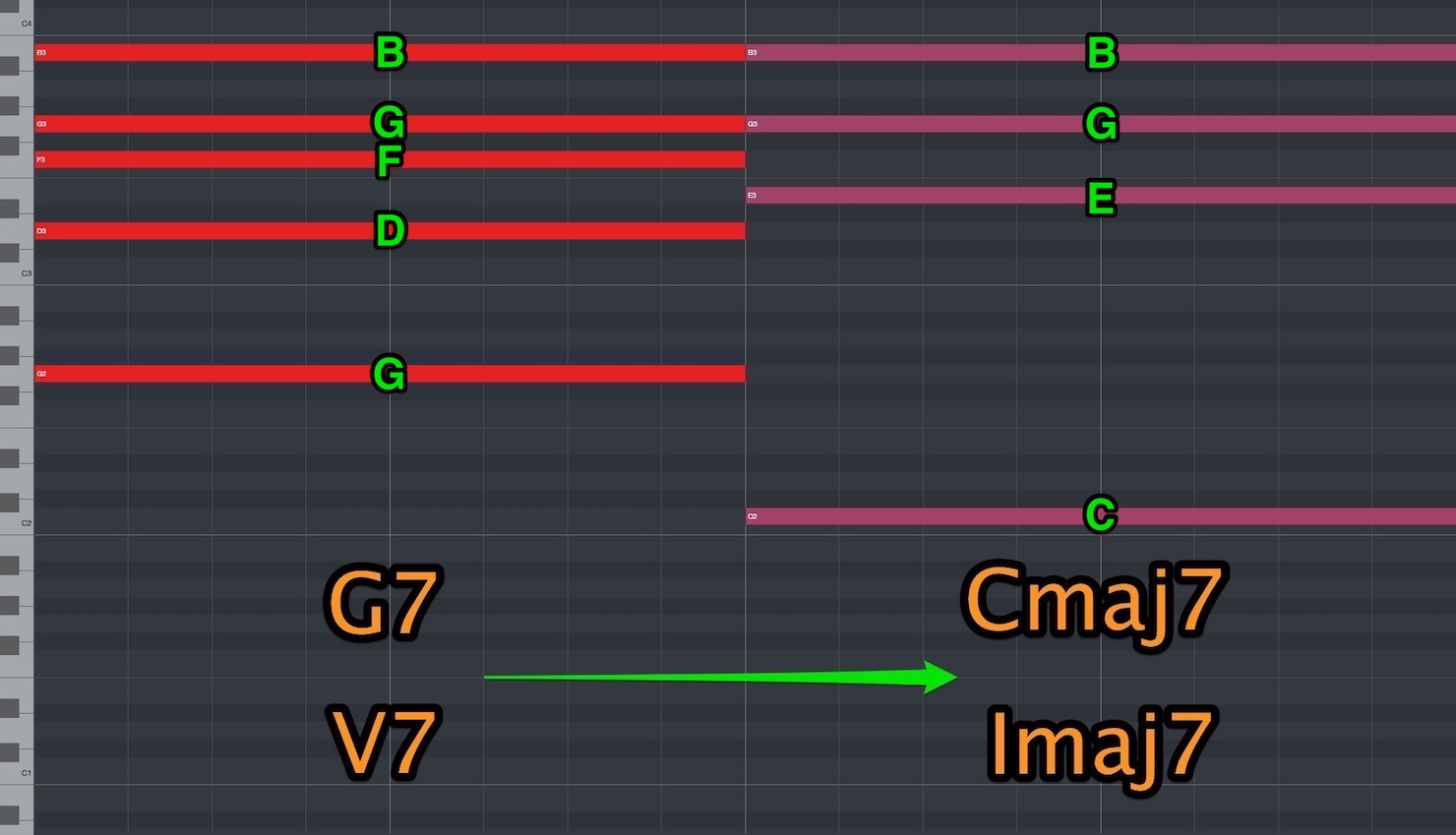 Lets add a bass note to make it easier to understand, arrange the voicing, and give it another listen.
The V７→Imaj7 progression has been changed toV→I.

Of course, V７→I would work as well.

This creates a much more bright sounding resolution.
We recommend trying different chord types to capture different emotions in your own music. 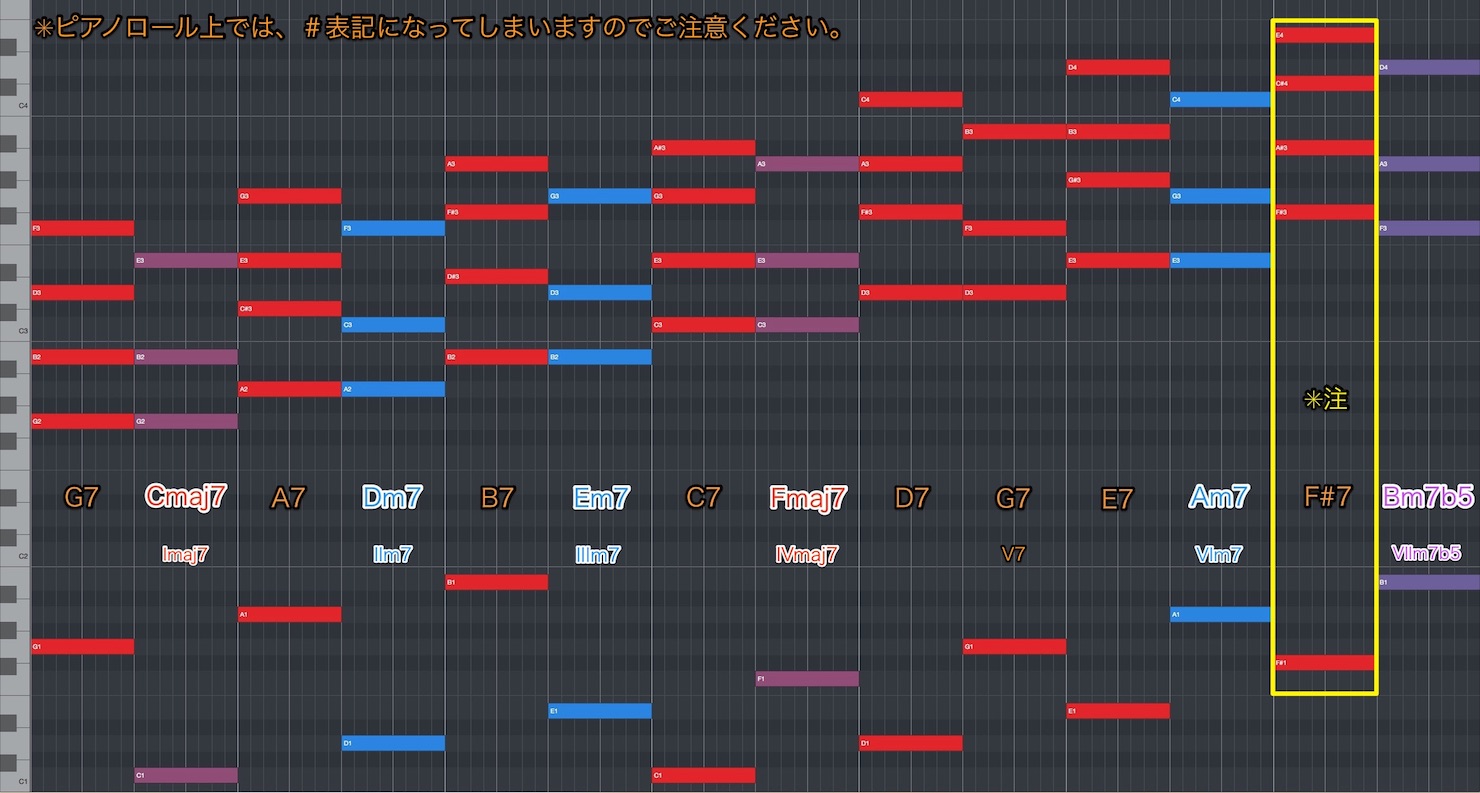 ✳︎The voicings have been changed.

These are our results.
The newly added chords are written in the orange text. 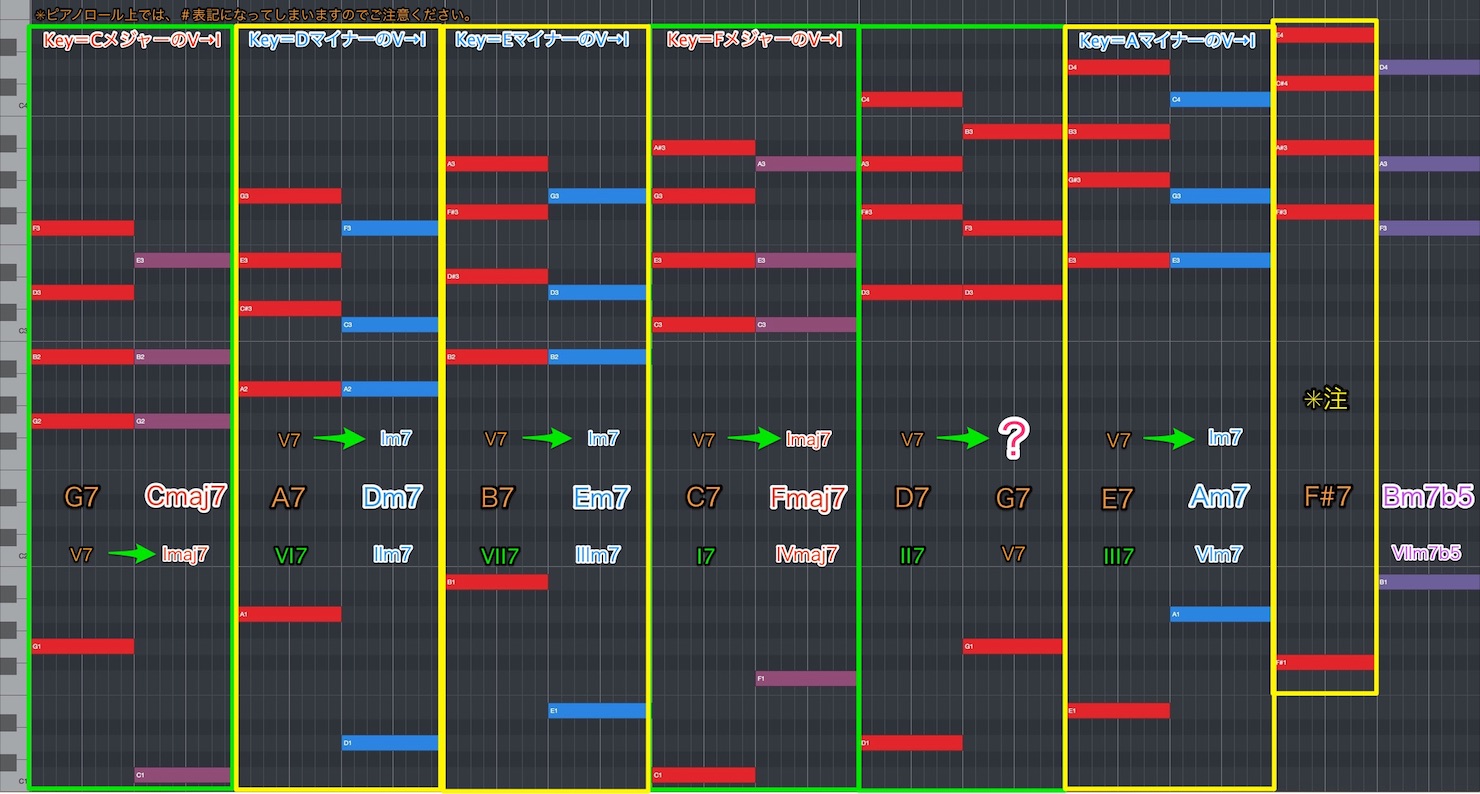 We have written down the numerical equivalent for the chords to help with analysis.
✳︎Please be aware that these different from slash chords (X over X style compound chords) 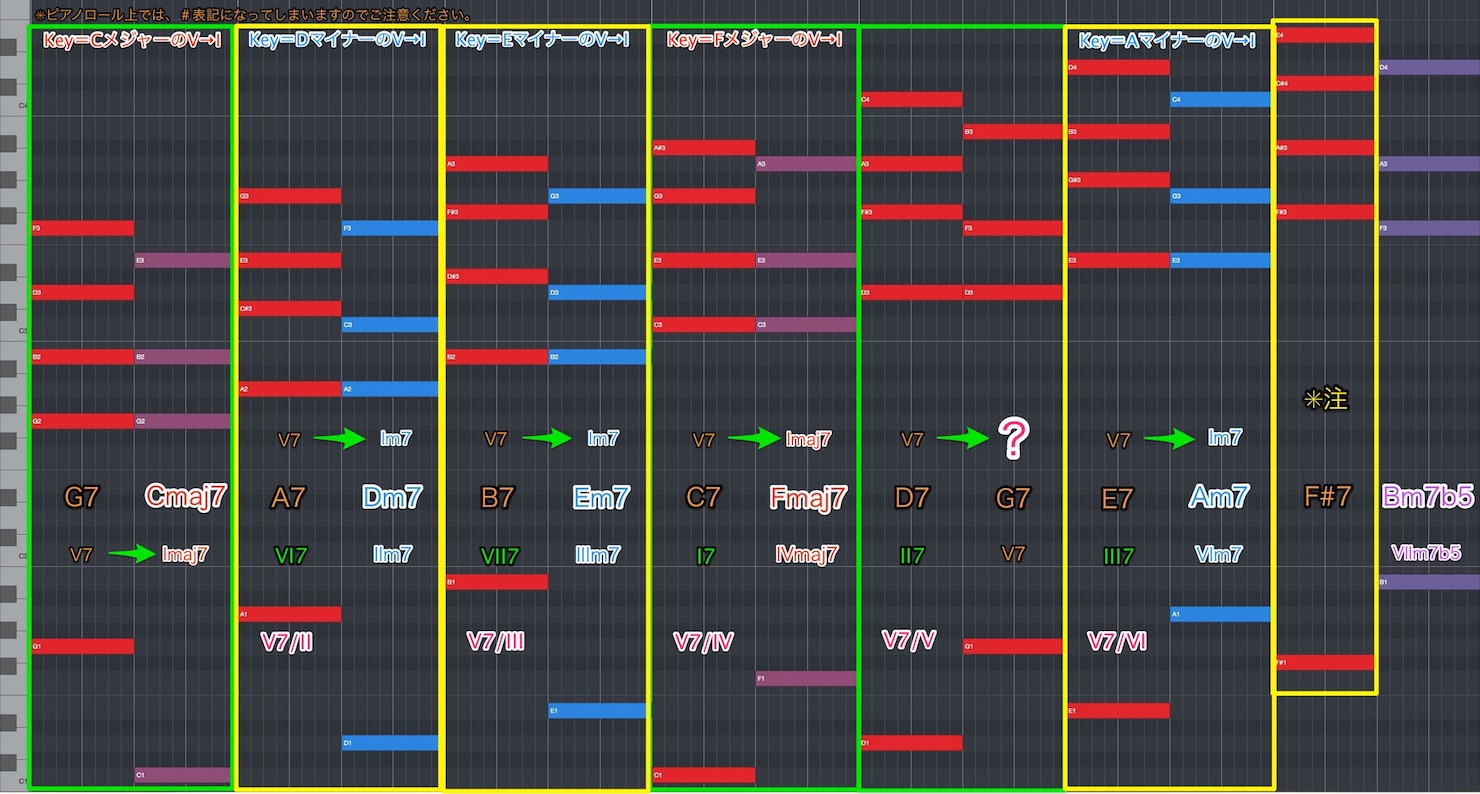 Lets write these into the Fly Me to the Moon score as well.

✳︎From the chords boxed in yellow above
One way to read it would be V7/II (five seven of two), meaning the V7 of the II chord.

Next, lets take a look at each V→I movement.
We will listen in the order of V７→I (7th chord), V→I (triad), and V７→I (triad) while focusing on the idea that “the chords are moving to a resolution”.

Next we will look at the first area circled in red (5th from the left). 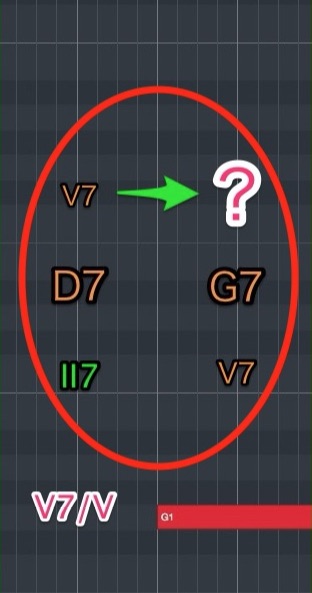 When we look closely, we can see that we are moving from a dominant 7th to another dominant 7th chord.
We will take a look at this concept in our next article.

Next will be a portion that was touched upon in articles 51~53.


Lastly, lets take a look at the last area circle in red (7th from the left).


You may have felt an even greater sense of unnaturalness when compared to the 5th.
Though this movement will sometimes be classified as a secondary dominant, because resolving to a m7b5/dim chord as a I is too unstable, generally a VIIdim/VIIm7b5 does not have a secondary dominant chord. 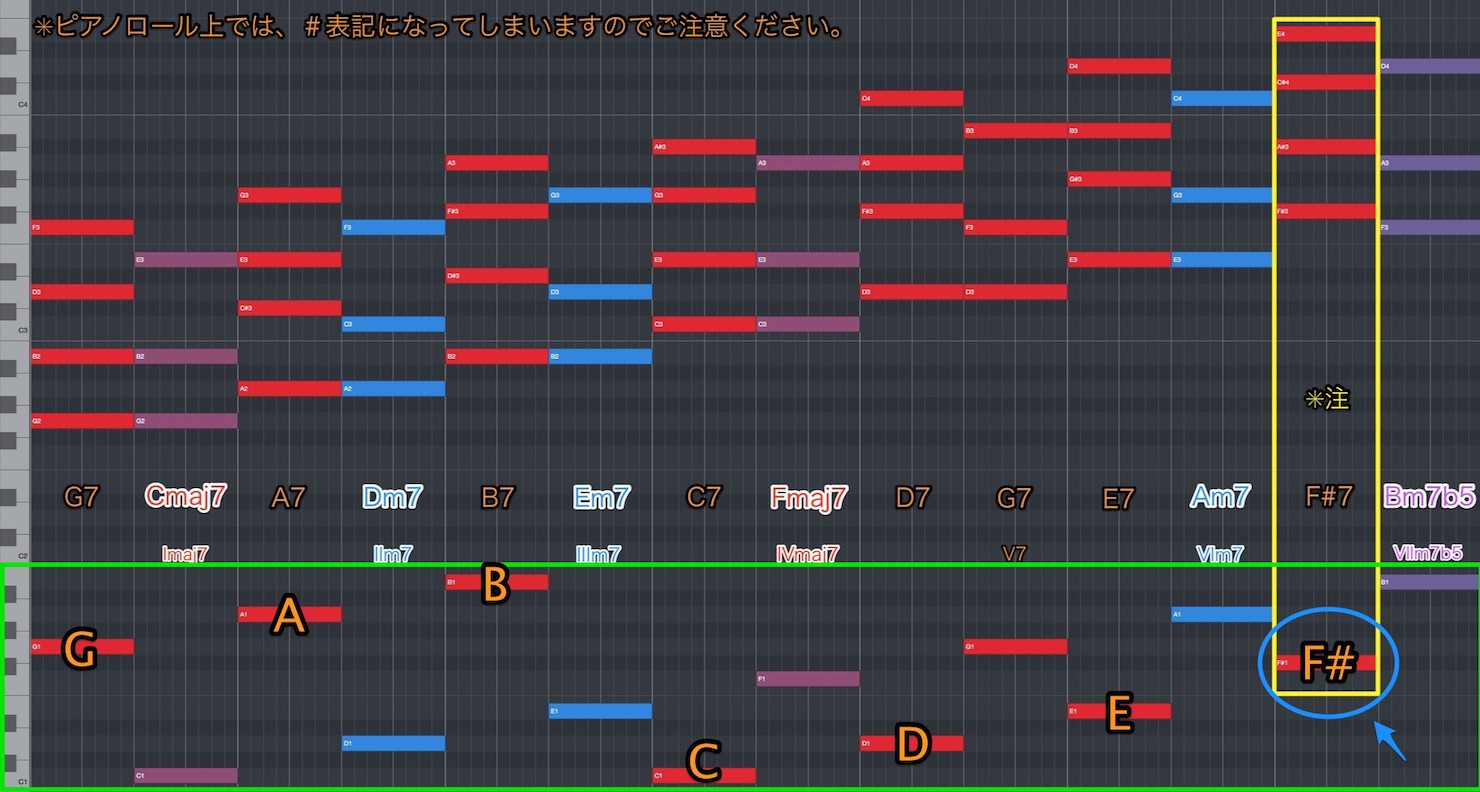 Another difference is that the root note is a note not found in the original scale.

If diatonic chords could be thought of as family, think of secondary dominant chords that have root notes found in the original key as relatives, and the blue area that is not found in the scale as a distant relative.

Next time, we will look at the unstable and unnatural sounding area that we did not get around to in this article, as well as some arranging techniques using the secondary dominant chord progressions that we have seen up until this point.