Mastering Saturation to Bring Your Mix to the Next Level

This mixing TIPS article is the 3rd instalment based around the Abbey Road Collection, and we will be looking at 3 saturation style plugins Abbey Road Saturator, Abbey Road Vinyl, and J37 Tape, while focusing on the unique features found in each. 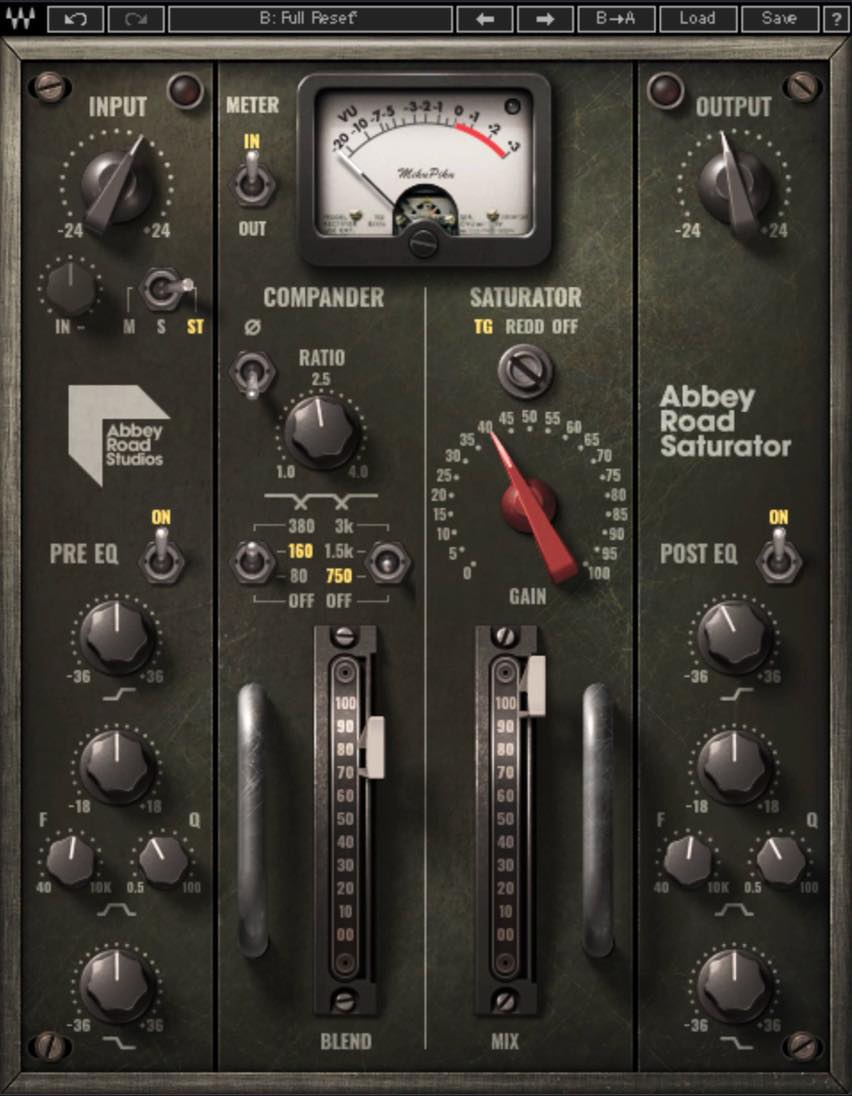 First lets look at the Abbey Road Saturator.
We’ve applied it to some drums, so lets hear how it sounds with/without it.

The sound becomes dramatically different and cool with this plugin applied.

Though the Abbey Road Saturator is great for saturation as the name implies, the SATURATOR gain knob isn’t the only thing that changes the saturation sound in this plugin.
Another important parameter to adjust here is the INPUT. 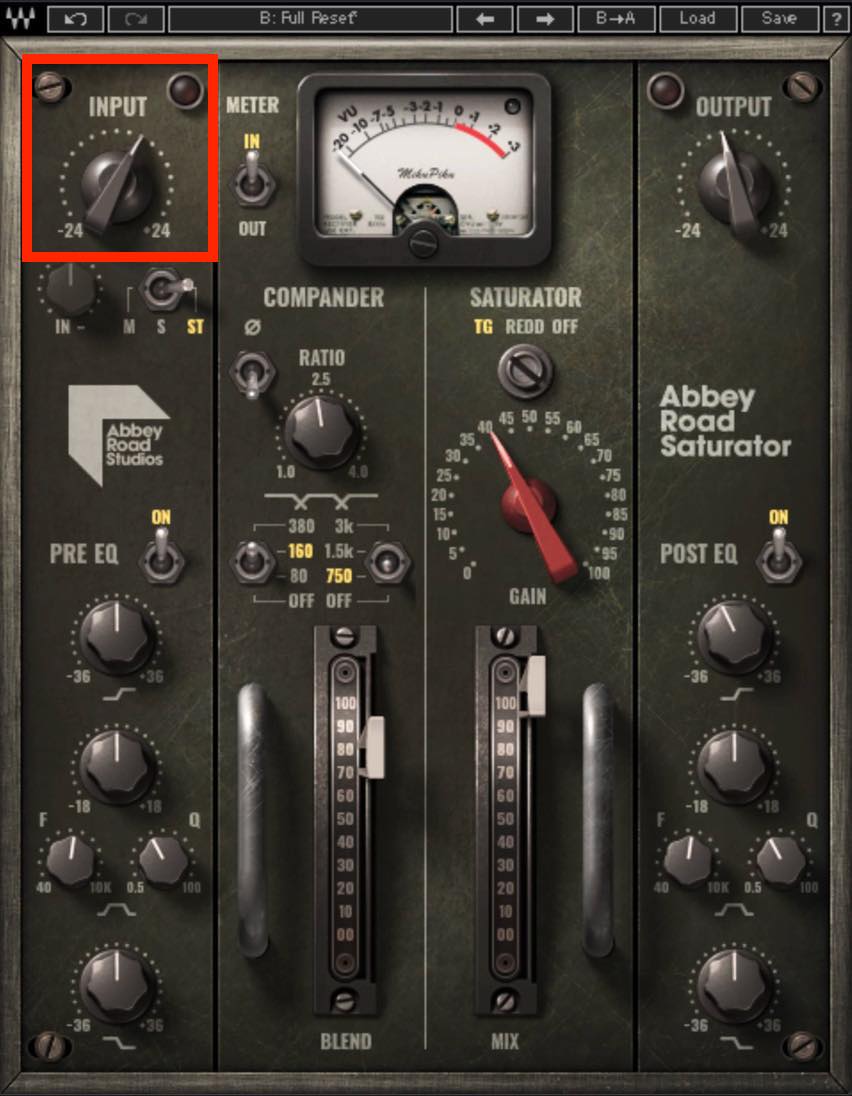 INPUT deteremines the signal level coming into the plugin, and in most cases you adjust it carefully to avoid distorting the sound but because this is a saturator, we can try pushing it to the limit.
In this case, we can pay attention to the indicator on the top right. When it’s green there’s still plenty of room to go, yellow is pushing the limit, and red indicates when the sound is distorting/clipping. Its best to adjust the input accordingly so that we can focus more on the change in sound.
We can aim for the yellow light if going for a comfortable amount of saturation, or we can aim for red if going for more intense saturated sounds, and these tools allow us to easily make adjustments accordingly.

The “secret weapon” feature that is found in the Abbey Road Saturator is none other than the COMPANDER. 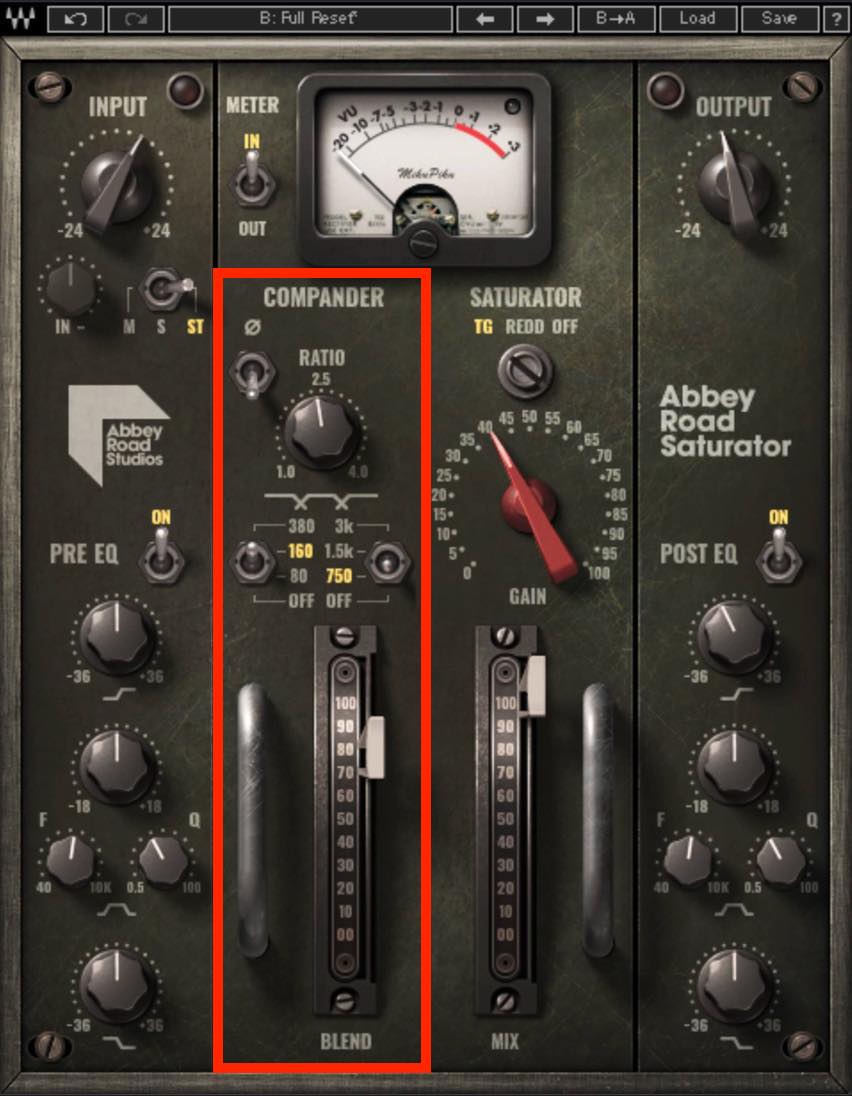 We’re guessing that this name comes from combining the words compressor and expander.
It works by first by compressing the signal, running it through a low/high-pass filter, and then expanding the sound at the end. This format was originally used to reduce noise on tape.
The saturated frequency band will change greatly depending on the ratio and filter settings.
Once you’ve found a good sound, try adjusting the blend. Though the signal may sound a little squashed when set to the max, by making subtle adjustments you can get more punch and body out of your drums.
It will honestly create more drastic changes in your sound than the Saturator. 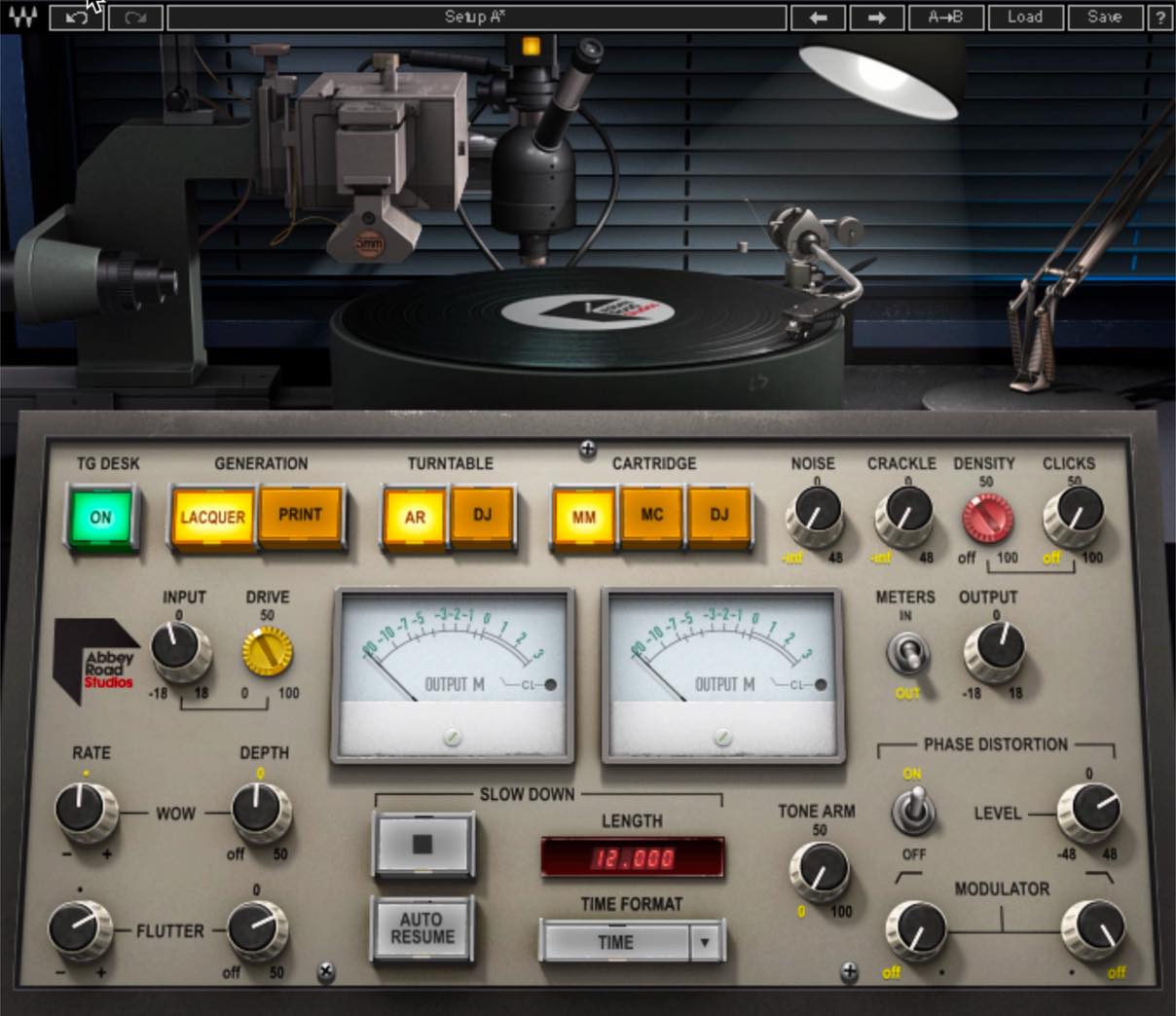 Next we have the Abbey Road Vinyl plugin.
It’s been applied to the Bass, so lets compare how this sounds with/without the plugin.

The sound has more grit with it on and even sounds fatter.

Abbey Road Vinyl is a faithful emulation of the vinyl cutting machine found in Abbey Road Studios, and allows you to add the warmth and texture of analog records, as well as saturation style effects.
For this article we will be focusing on the saturation related features.

First we have the DRIVE knob here. 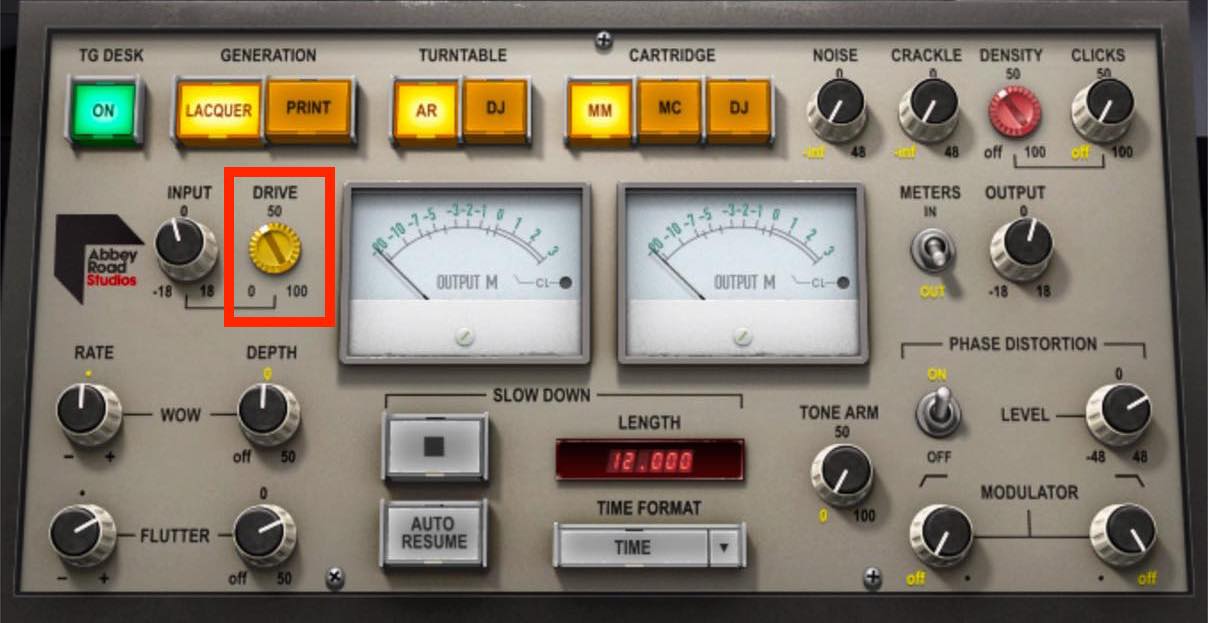 When cranked up, we get a very lo-fi style saturation. When placed lightly, we get a little grit which gives the sound a very cool feel. When the DRIVE knob is raised, the output is also lowered in Vinyl, allowing you to get just the saturation without the changes to volume.

In addition, we can get the sound of running through the TG 12410 console with TG DESK ON to get a slightly different saturated sound. 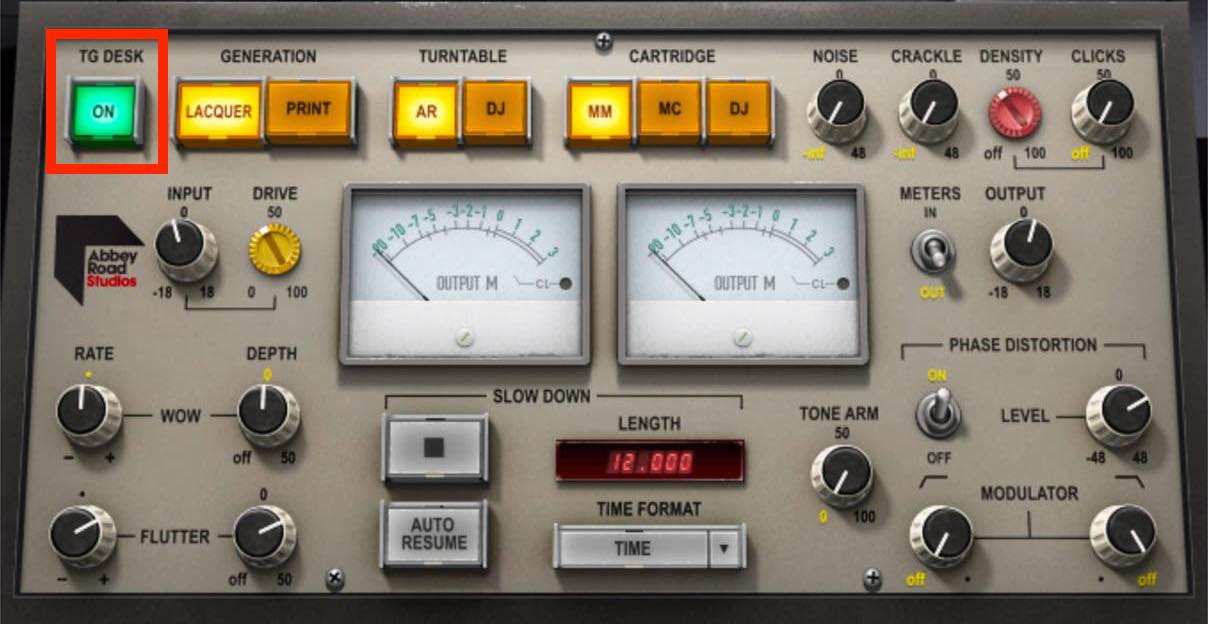 With TG DESK ON we get a slightly more aggressive and clear sound, and a more mellow sound when its OFF. We feel that ON works better for this slap bass sound.

Another unique saturation parameter found in Vinyl is the PHASE DISTORTION. 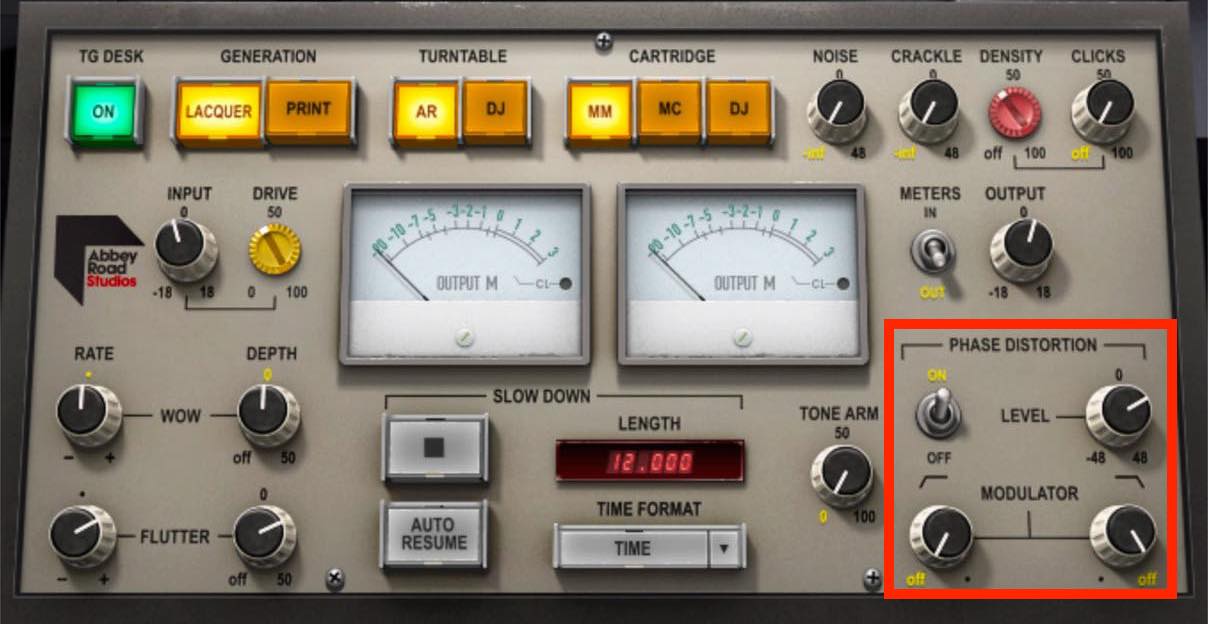 This allows you to create phase distortion on purpose to create very interesting results.
It’s similar to saturation to fuzz but not quite the same, and is a unique sound that you wouldn’t be able to get out of any other effect. We could apply it lightly for a nice grit, or apply it heavily as an effect.

FLUTTER isn’t a saturation related effect, but it’s another interesting tool in this plugin. 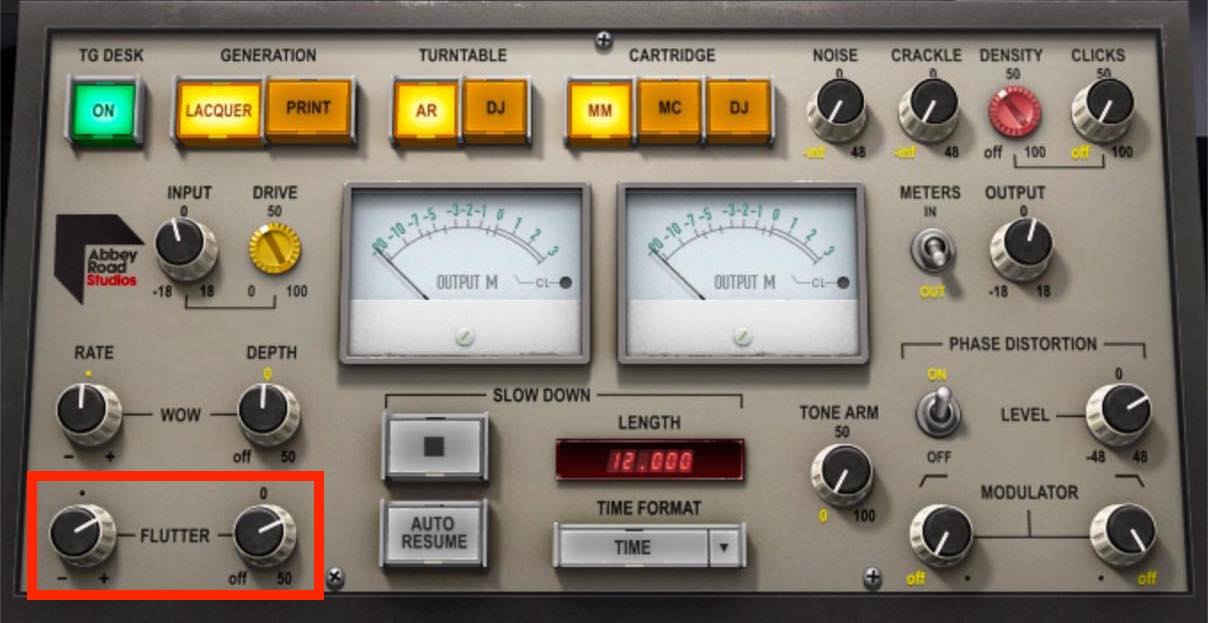 This modulator creates a sway in volume similar to a tremolo, but you can get an over-compressed pumping like sound by using it heavily. By applying it lightly, you can also get the random wobble that you get in analog gear. 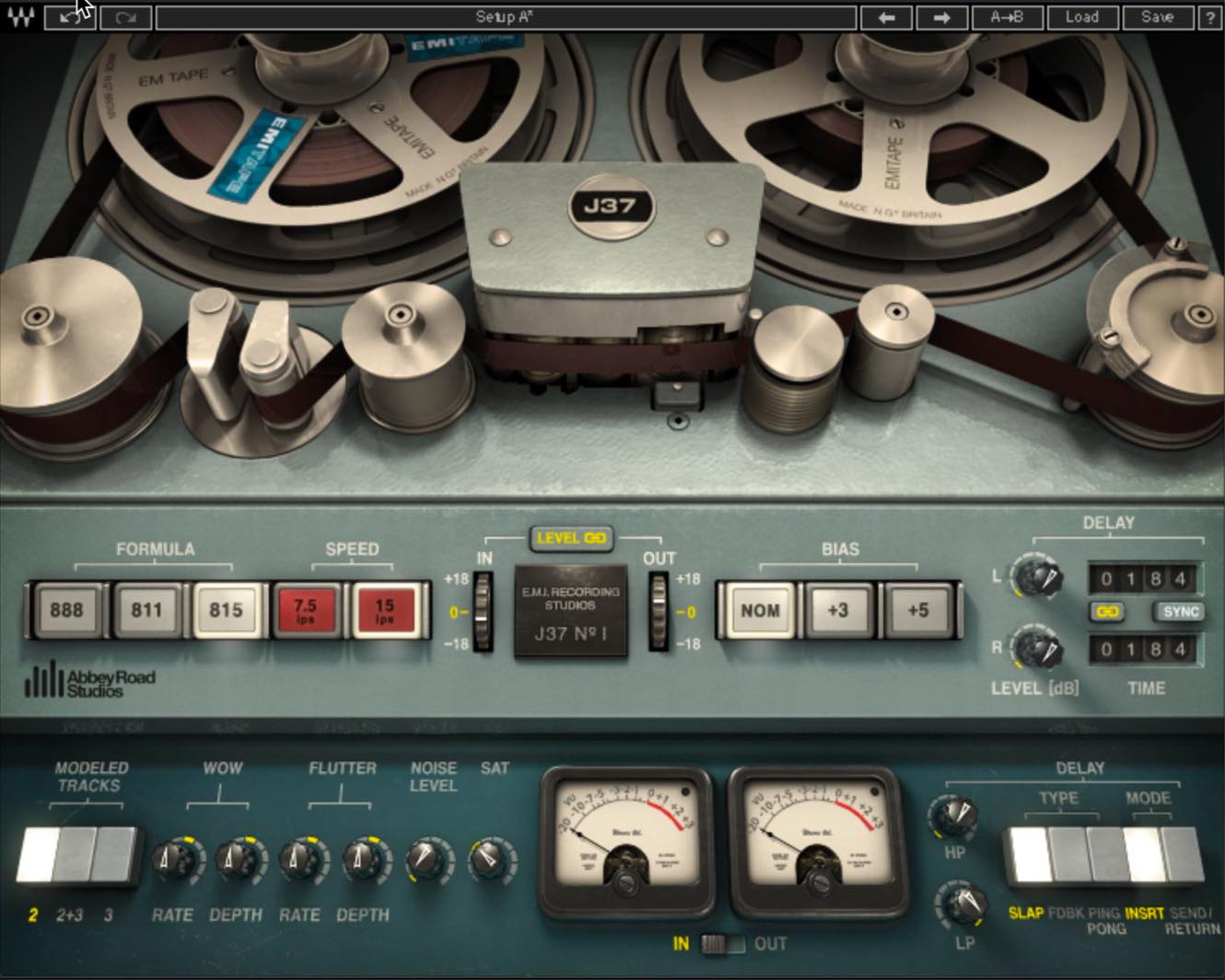 Next we have the J37 Tape.
We have it applied to the master, and like we’ve done earlier, lets hear how it sounds with/without it.

The subtle harmonics added give the track more punch and flair, with more distinction between the low/high ranges.

Though the saturation in J37 is usually adjusted using the SAT level knob, the IN (input level) also plays a great roll in creating saturation.

The saturation level begins to apply to the high frequencies particularly on sounds with more attack. We get less destructive sounds below a certain point, with a more subtle adding of harmonics to the sound.
On the other hand, by raising the input level, we get a more saturated and squashed low end. This would probably work better on a track as a distortion effect than the master.

This parameter isn’t exactly related to saturation, but lets take a look at the MODELED TRACKS feature found in J37.

In a real tape machine, MODELED TRACKS would be a parameter that allows you to choose which track to record to on a multitrack. 2 is the 2nd track, 3 is the 3rd track, and 2+3 is multi-mono with track 2 on the left and track 3 “recorded” on the right.
When we compare 2 and 3, 3 seems to have a little more high frequencies. 2+3 gives us a clear stereo split and would be great to use on a bus track when you have many tracks in a song and the center begins to get muddy.

This completes our look at 3 saturation related plugins found in the Abbey Road Collection.
Each has it’s own unique saturation and sound, so we recommend using whatever works best on your source sound and situation.