Plugin Versions of Historic Hardware for the Modern Age 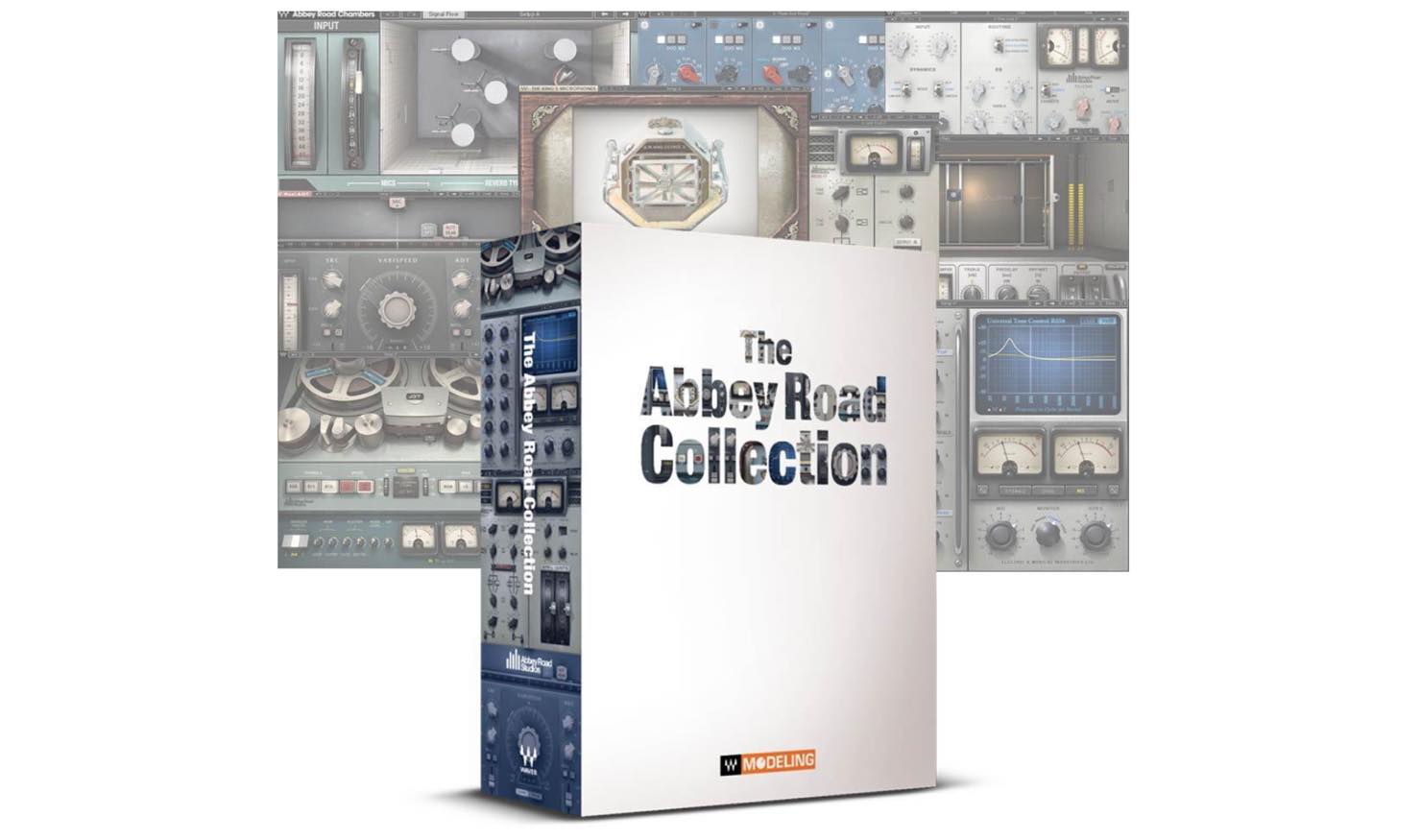 In this mixing TIPS article, we will be looking at using plugins from the illustrious Waves Abbey Road Collection bundle.

The Waves Abbey Road Collection was developed with the help of the legendary Abbey Road Studios and model the specific and unique hardware units found in Abbey Roads Studios.
After this mixing TIPS article, you may realise that the workflow and sound of these plugins still work incredibly good in modern applications.

Lets dive right into these plugins. 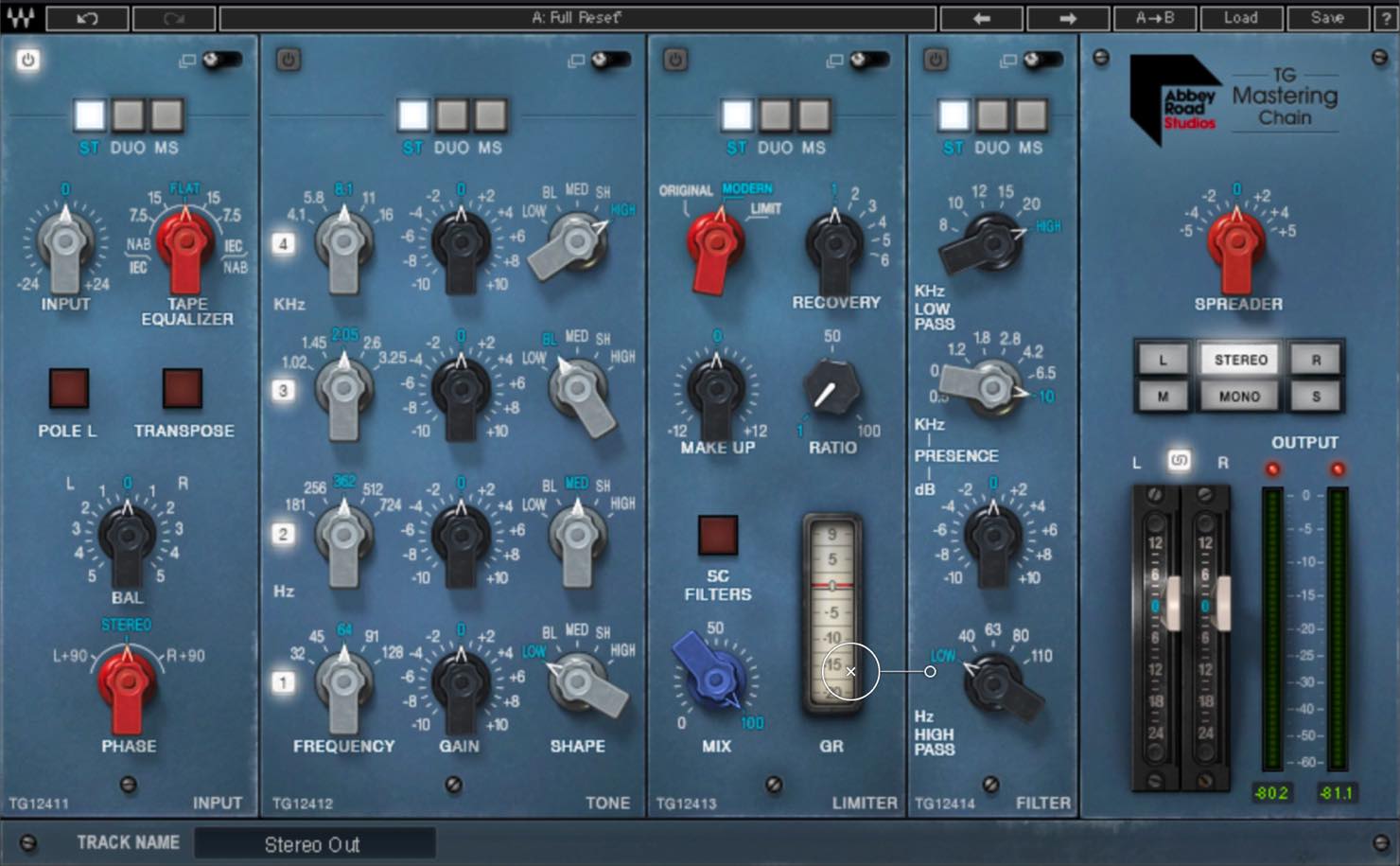 This plugin is modelled after the EMI TG12410 mastering console hardware found in Abbey Road Studios Room 5 is a faithful emulation of the console.
The EMI TG12410 is still being used to this day, and was used on Pink Floyd’s Dark Side of the Moon, Nirvana’s In Utero, Radiohead’s OK Computer, and other monumental works as a mastering tool.

At a first glance, it’s many knobs and layout make it seem like a complicated piece of vintage hardware. However, it is incredibly well organised as a plugin and allows you to rather quickly master your tracks. 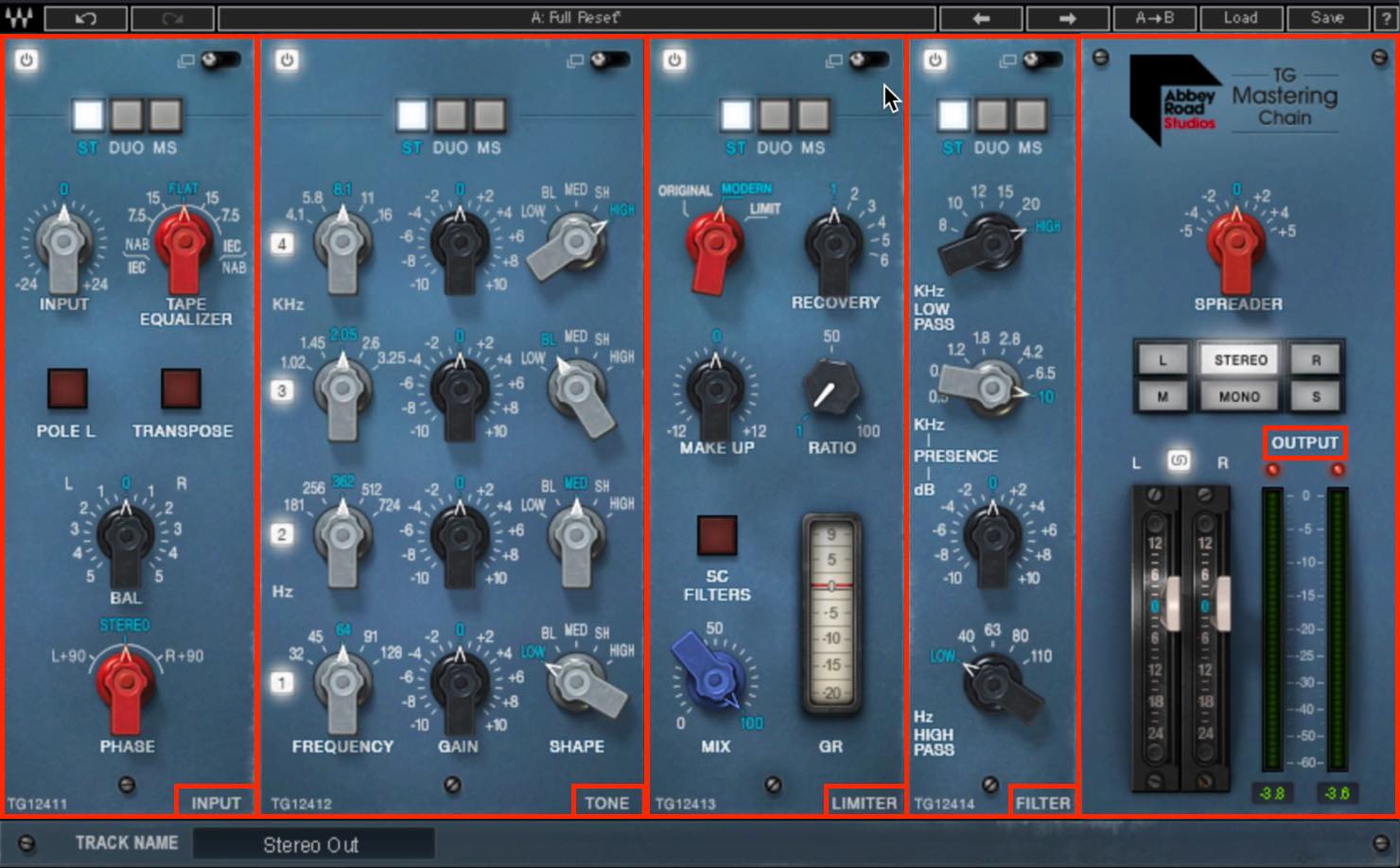 The order of Tone, Limiter, and Filter can be swapped around as well.

You can zoom into the display of each plugin from the zoom button above. 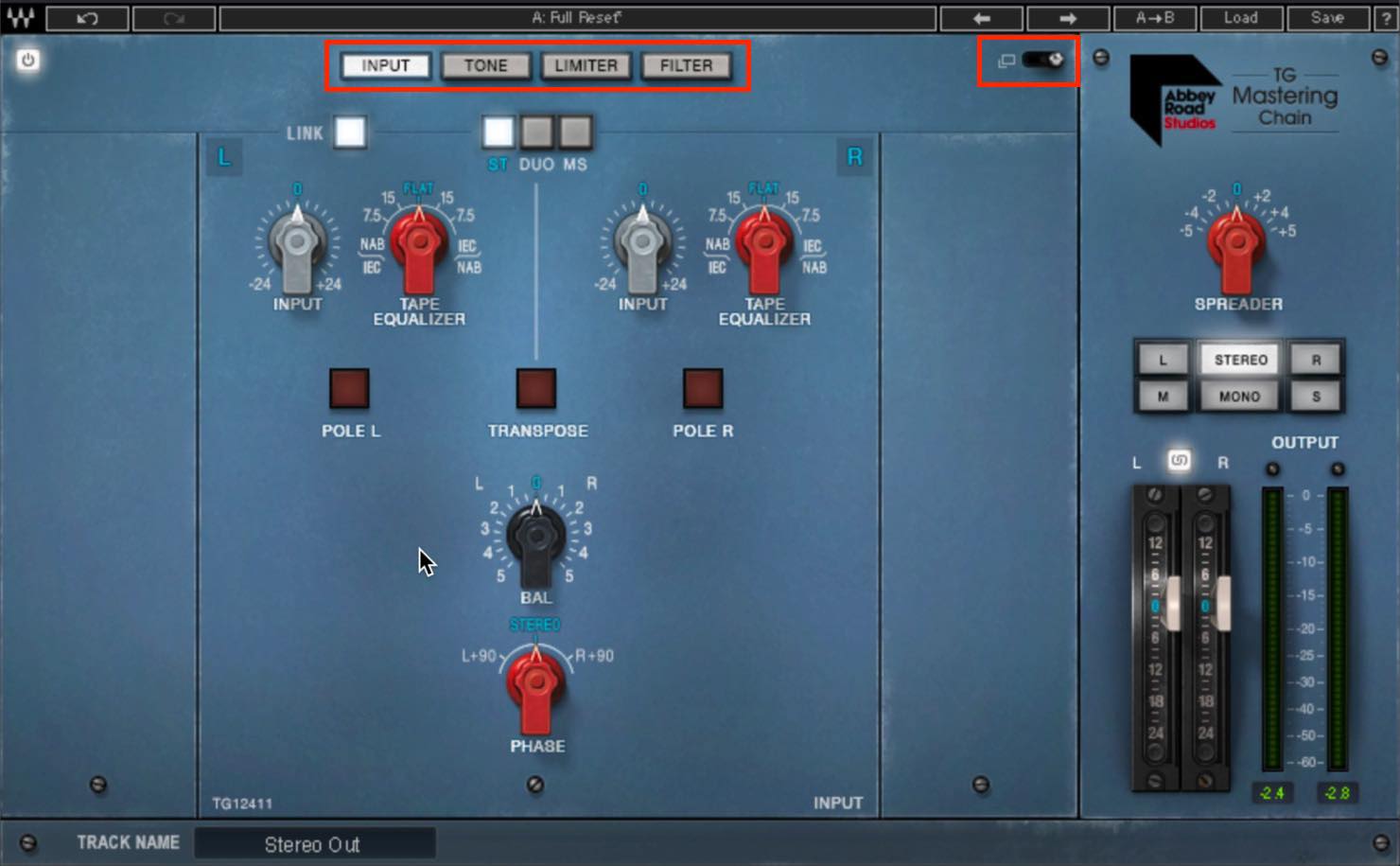 Though you can make general edits without having to zoom in, one of the biggest advantages to this plugin is M/S processing, which requires you to zoom in and change.
You can still easily switch between the various modules while zoomed in.

This time we have just a Limiter on our master track and will place TG Mastering Chain on it to begin mastering. 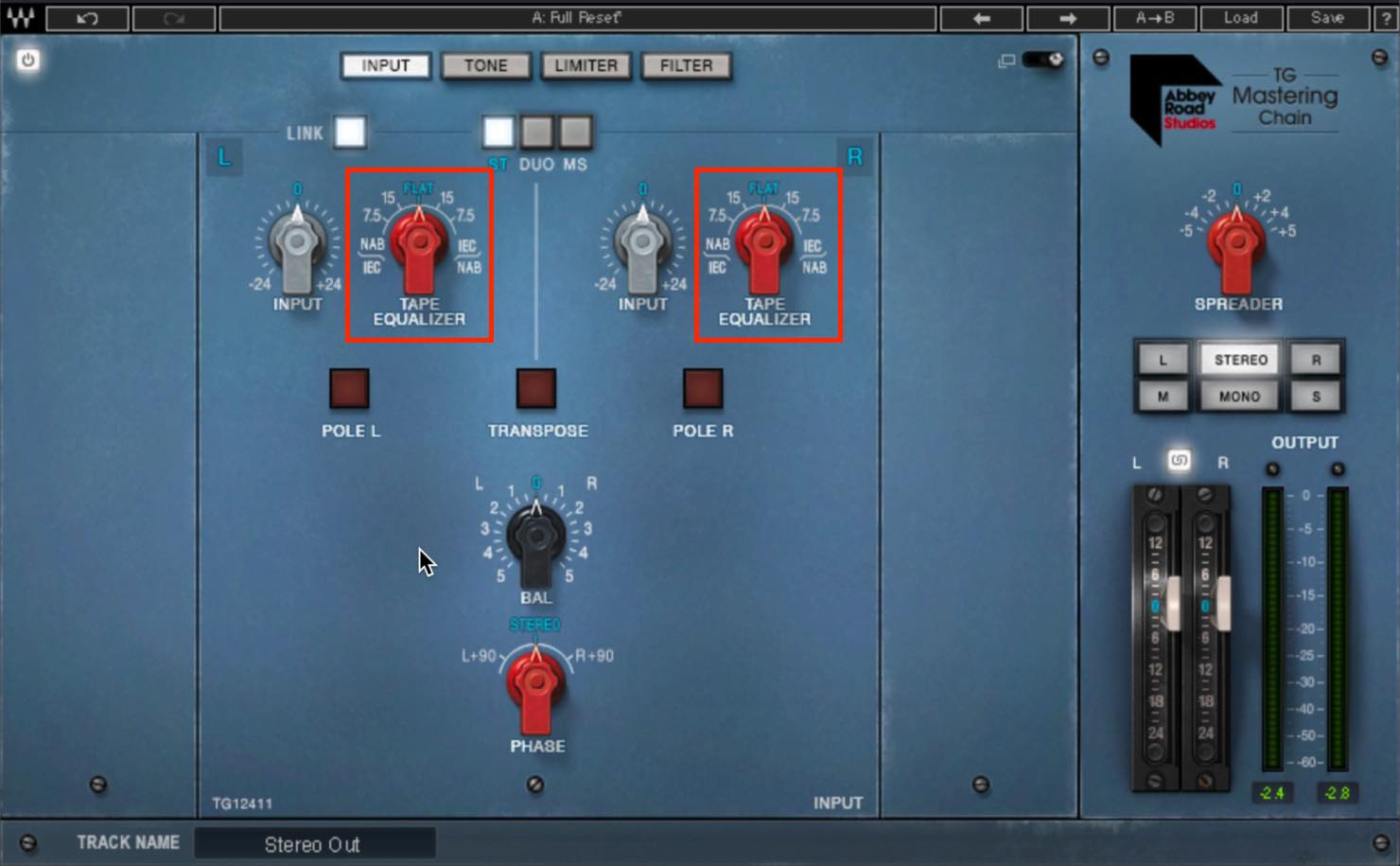 Here you can adjust the input volume, as well as the balance and phase, but it’s most unique parameter is the Tape Equalizer.
This was originally used to make up for differences in sound quality via different types of tape.

15ips towards IEC/NAB gives you more low end, while 7.5ips really scoops the sound.
NAB/IEC at 15ips gives great highs, while 7.5ips focuses more on the midrange frequencies.
You could find the kind of sound that you like from the Tape EQ first and make detailed edits with Tone as well.
Because we will take an in-depth look at Tone, we will leave these parameters flat. 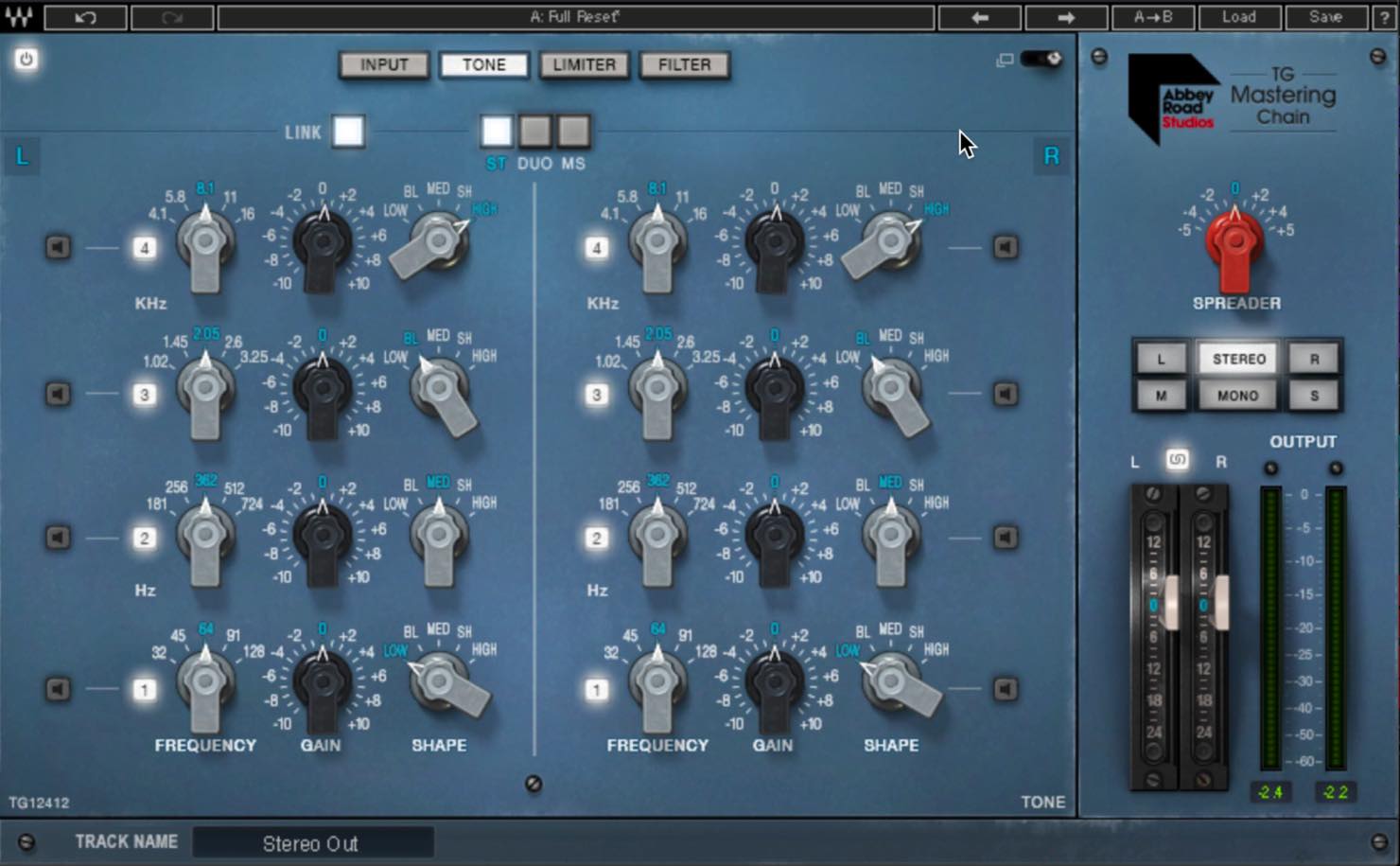 As you can see, this area works as an EQ.
It’s split into 4 bands from highs frequencies, high-mid frequencies, mid-low frequencies, to low frequencies.
From the left the parameters are frequency, gain, and shape, with Low-shelf, High-shelf, and 3 different bell types of filters available. BL (blunt) gives you a wider filter, while SH (sharp) is narrow, and MED (medium) is somewhere between the two.

We will be using the Tone module to do some Mid/Side equalising.
We will select MS from the 3 buttons above. By doing so, the left side becomes Mid while the right side become Side.

Theres 1 more thing to do before we start MS eq’ing. We’ll be raising the Side volume which is a common technique.
We will use the output module’s Spreader to do this in the TG Mastering Chain. 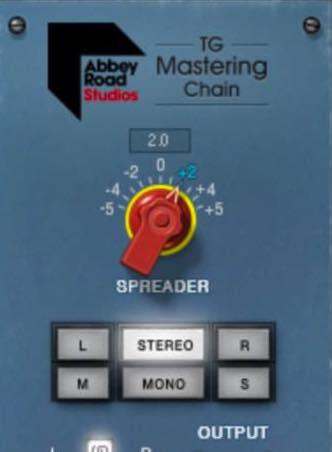 This knob works well and +2 will be plenty for subtle mastering. Now we get the same effect as raising the Side volume.

Next we will go into eq’ing.
We can use the solo button to hear what frequencies we want to effect.

When the solo button is on, we can hear what kind of frequency band is being effected.

Though EQ amounts will differ greatly depending on the song/style, we will display approximate amounts below. 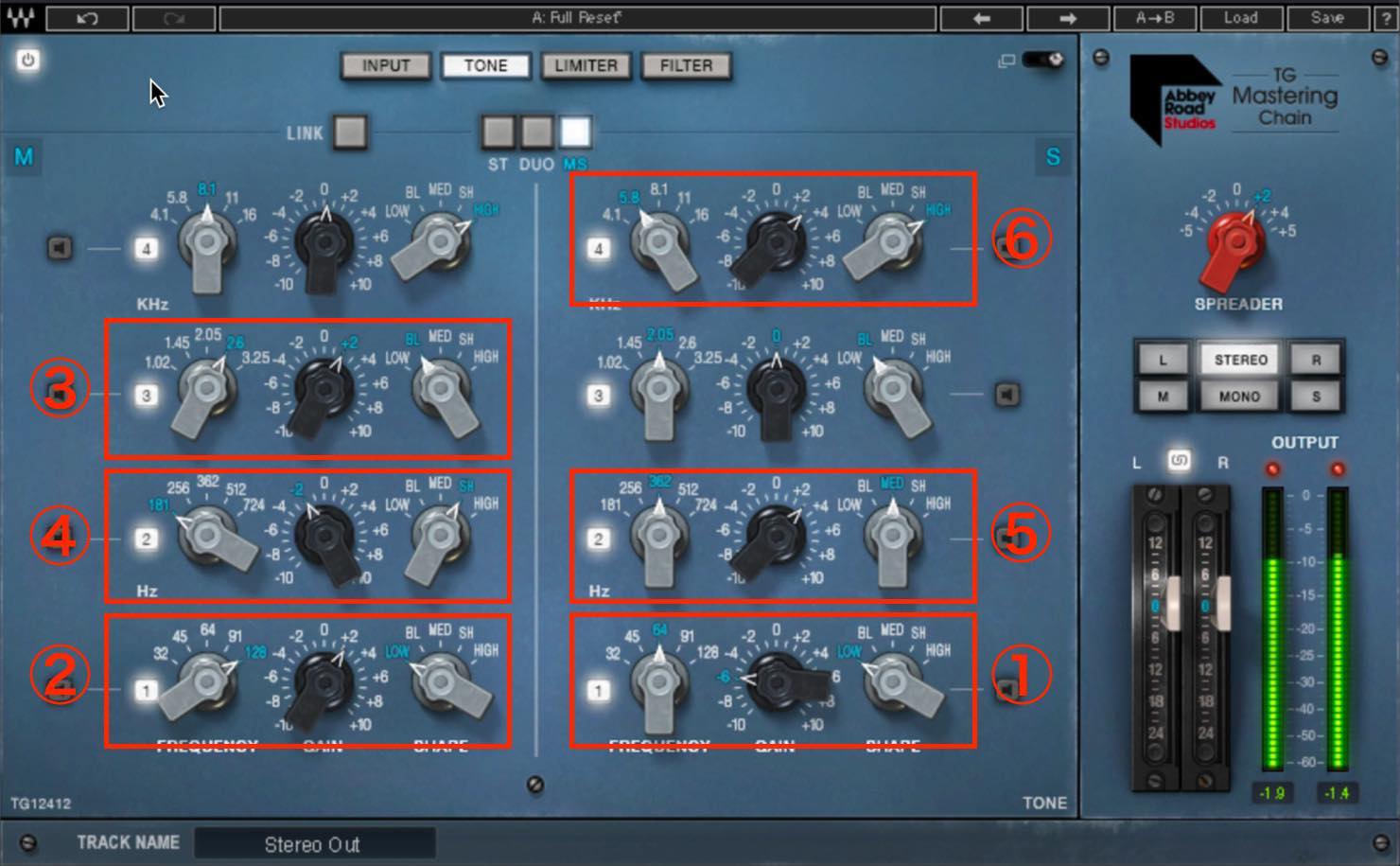 Lets compare the sound before and after using the Spreader and Tone module.

The sounds are better spaced out with more intensity. 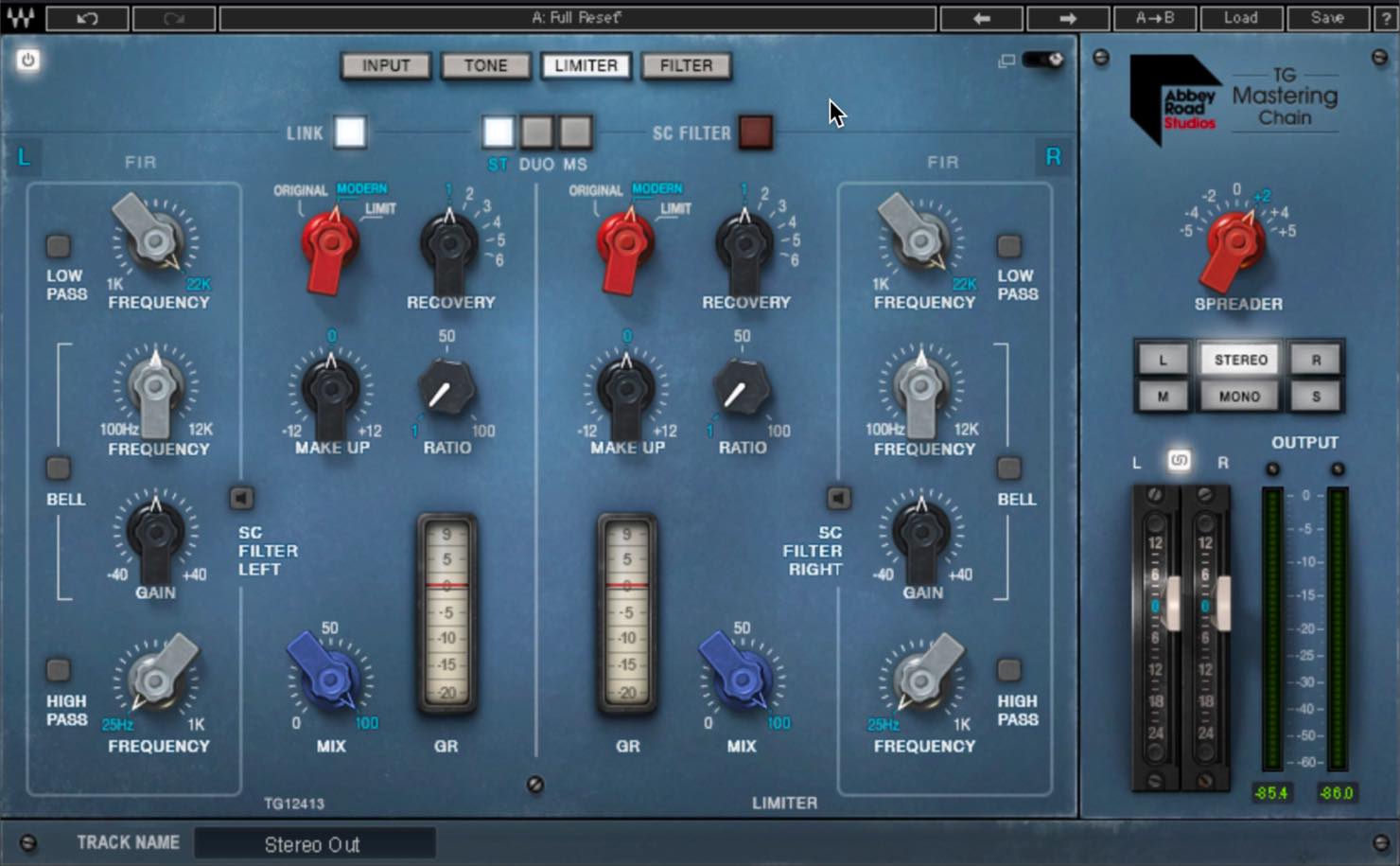 Though it is called a limiter, it works more like a bus compressor.
Even when Limit is selected, you won’t get a brick wall limiter style effect. It’s best to use a limiter or maximiser after this plugin.

The basic overview of the settings are as follows: 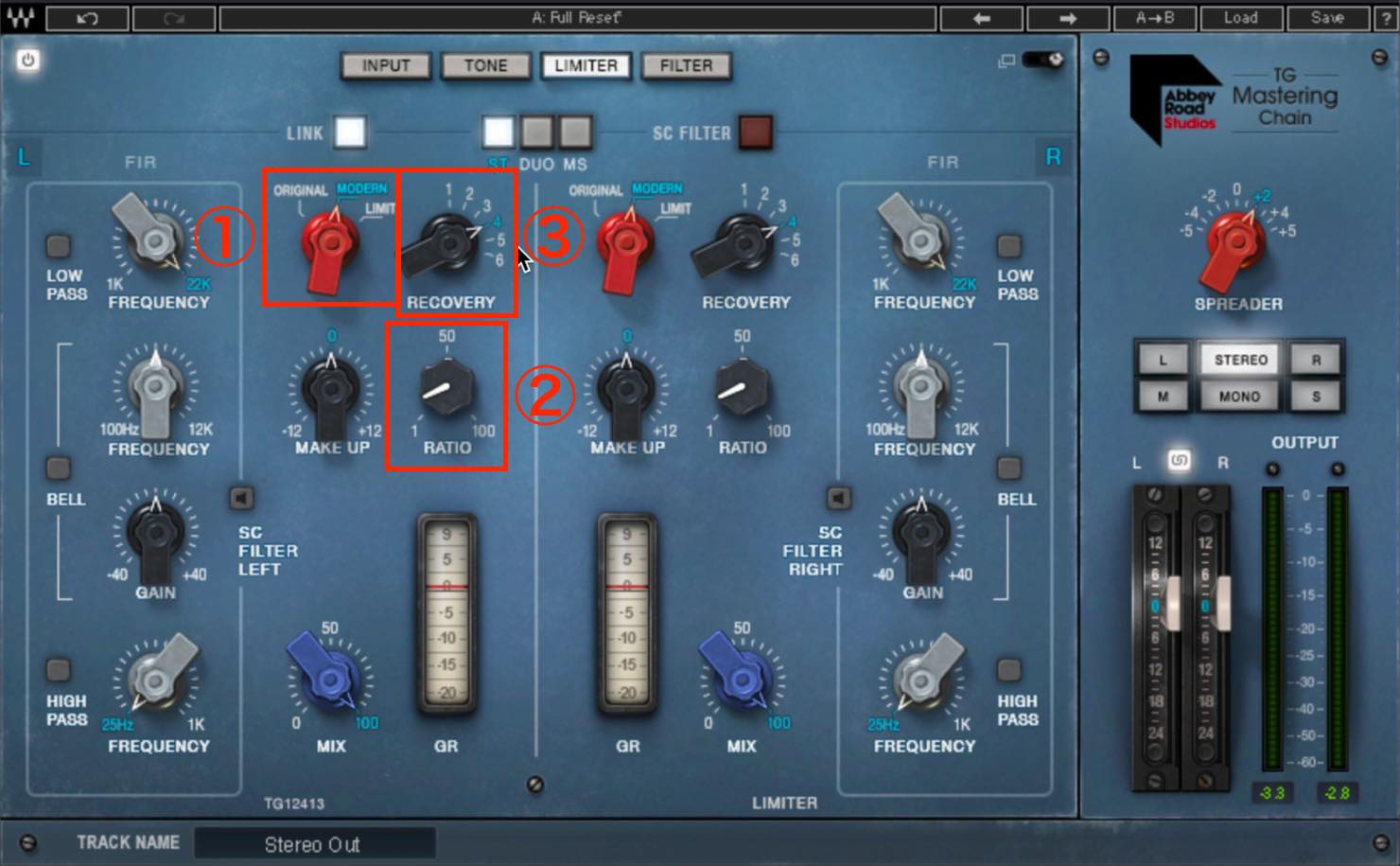 Lets try switching to M/S compression.
We can see that the Mid is being compressed more by checking the Gain Reduction meter. 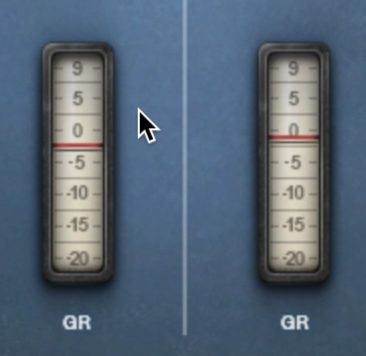 Now the Side is not being compressed by the mid compression. The sound becomes a little wider as a result.

Now lets combine with Side-chain filter to put a heavier compression on the Mid signal.
By raising the Mid ratio, the sound will get squashed but make-up’d so it will begin to sound more present. However, the vocal/kick/snare begin to lose their clarity.
We will use side-chain to add some clarity here. This is an internal side-chain, and places a filter on the signal triggering the compression to adjust the amount of compression.

We can preview the sound being compressed using the speaker mark which will come in handy. 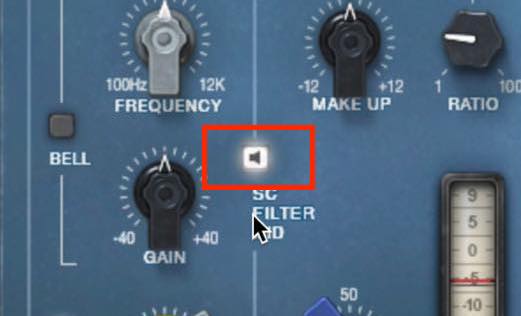 We’ve applied side-chain settings as shown below.
Please use it as a reference, and keep in mind that settings will differ depending on the song/style. 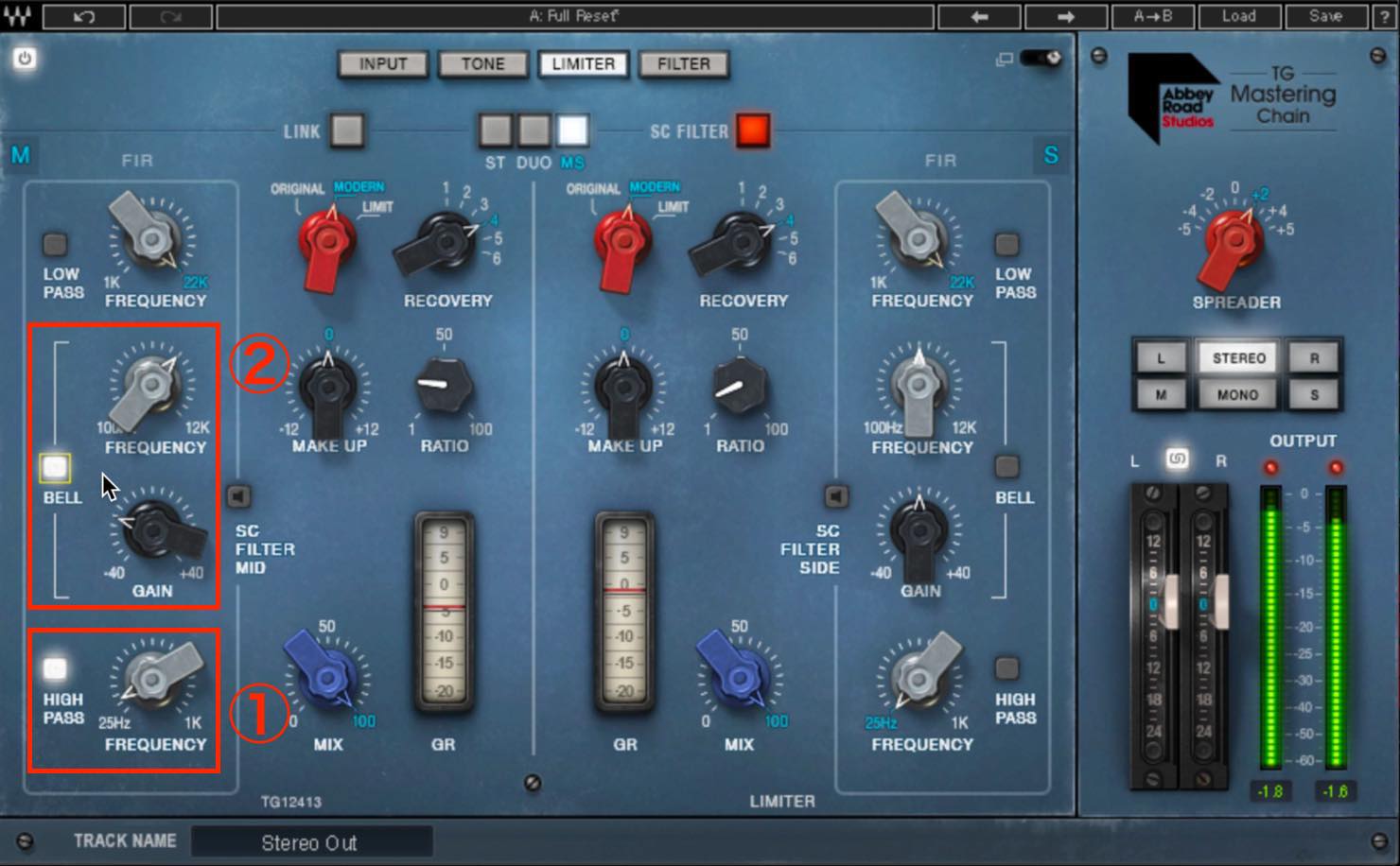 Lets compare how the limiter module sounds on and off.

The sound is more glued together while still having clarity, and has more intensity to it.

The parameters are simple with a Low Pass, Presence, and High Pass band filter knob.
Though you can use the low and high pass to cut out unwanted frequencies, we will take caution to avoid changing the overall sound. You can keep them off if you prefer as well.

Presense is a bell type filter, and is good making for some final touches. Our sound is basically complete at this point, so at the most we can make a 1-2dB adjustment. This time we went ahead and boosted 4.2kHz by around 1dB.

Lets compare the TG Mastering Chain on and off on the entire track.

The sound is incredibly well polished now. Once you learn how to use the TG Mastering Chain you can quickly dial in and perfect your sounds. 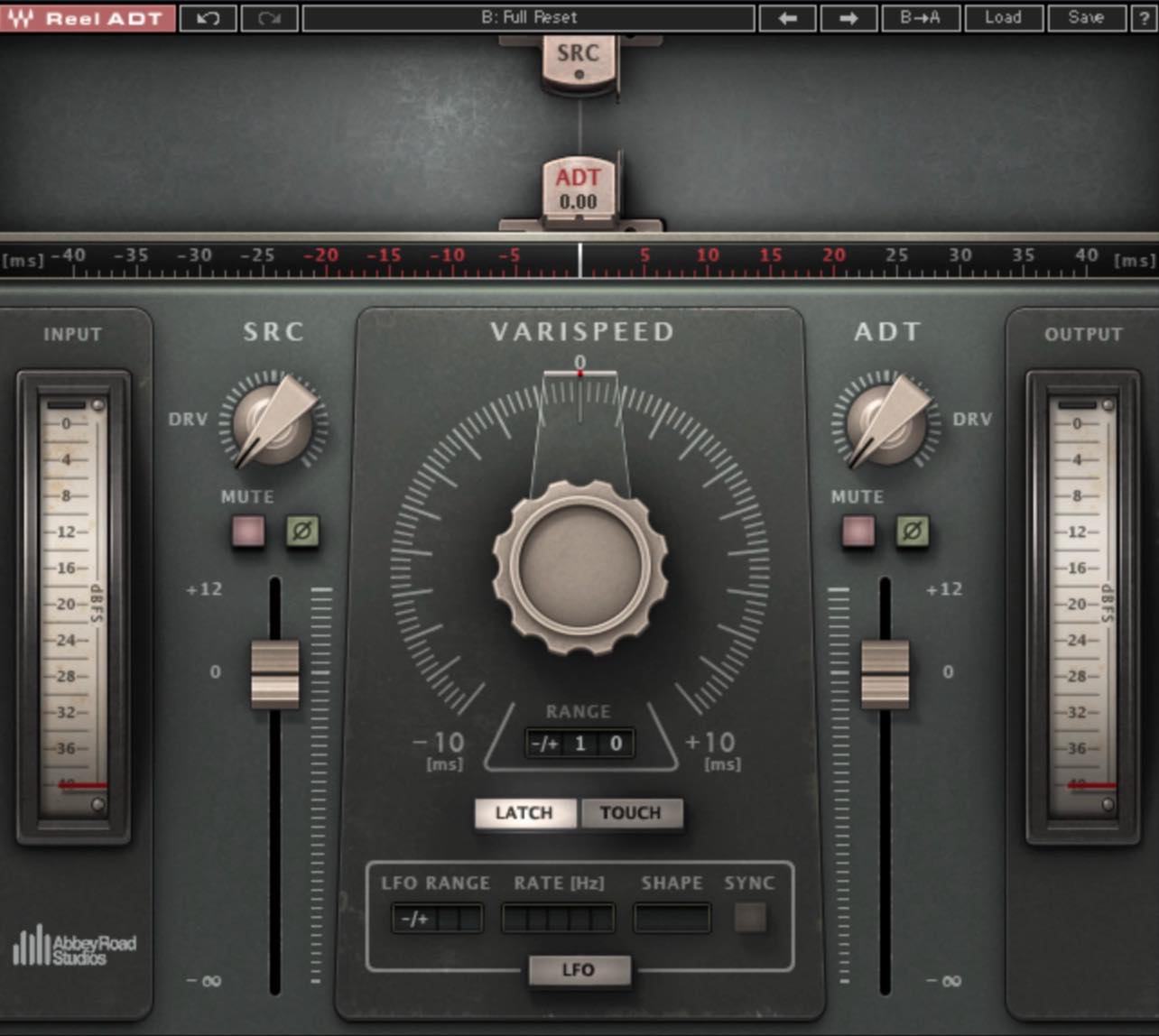 This is the first plugin emulation of the first double tracking hardware created for Abbey Road Studios.
Double tracking is a common mix technique used by The Beatles and well into this day and age, but Reel ADT is not simply a double tracking plugin, and it’s tube tape tone and unique movement creates a beloved sound that is unique to this plugin.
The beauty of this plugin lies is it’s simplicity. 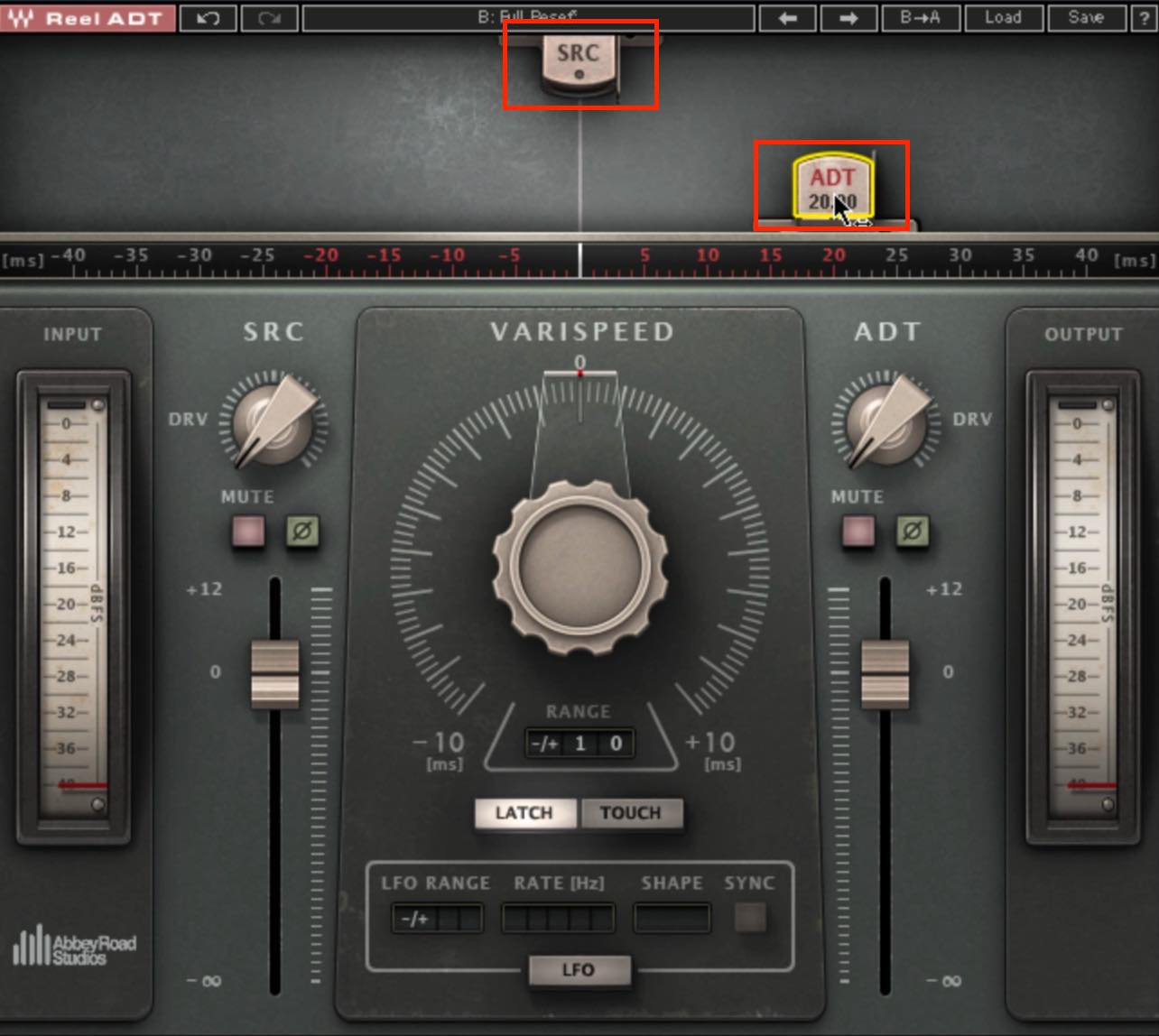 First, at the top of the plugin, we have a SRC (source) mark at the top.
This represents the source sound that will be double tracked using this plugin.

By shifting the ADT mark below it, which applies a small delay to the signal, you can create an artificial double tracking effect. Raising plus or minus 20ms and above creates a more obvious doubling effect.

However, simply changing the time creates phasing issues and makes the effect sound very obvious. What comes in handy here is the VARISPEED knob which shifts the delay time relevant to the ADT. 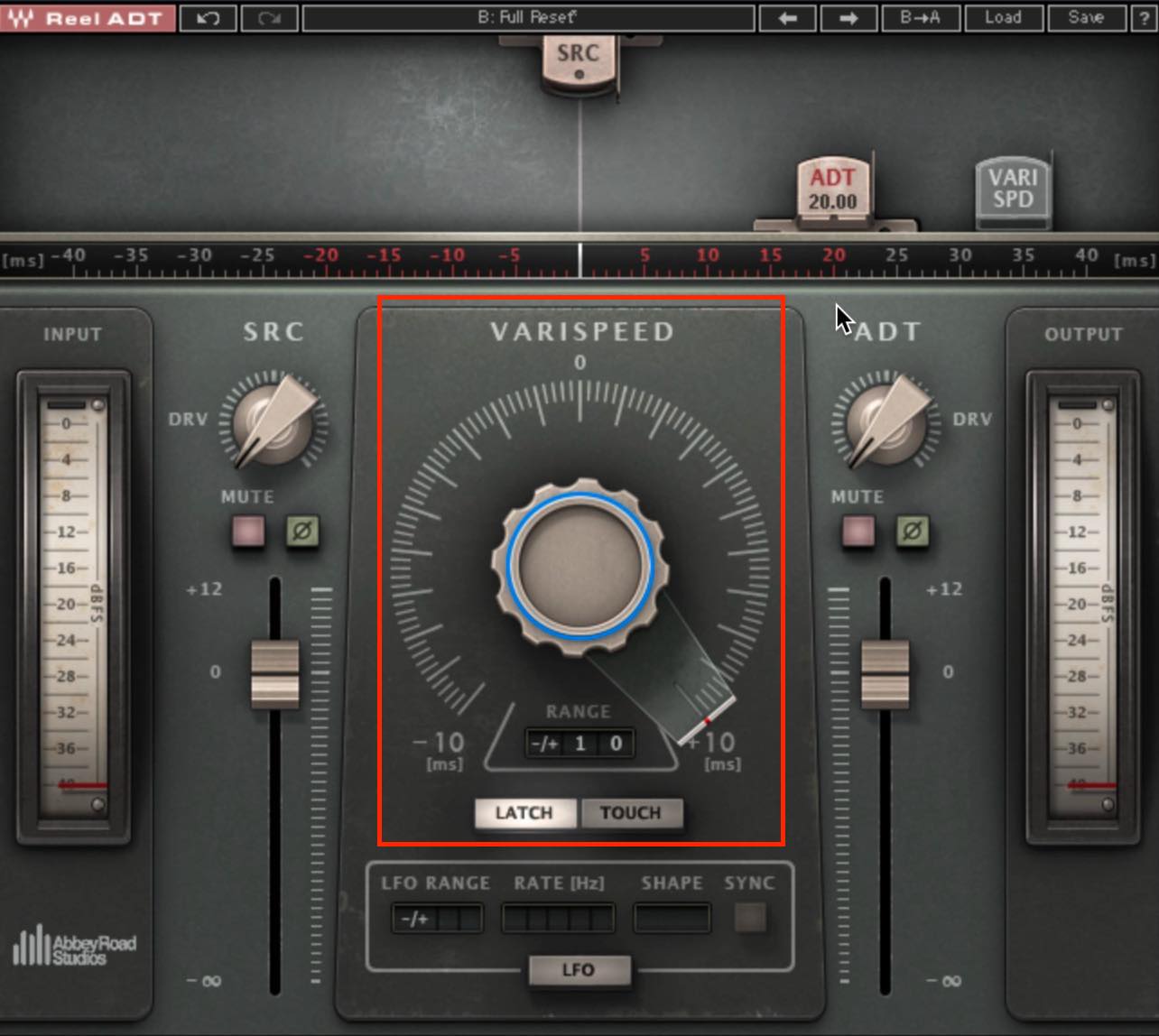 By moving the knob in the middle, and new mark appears beside the ADT mark.
This creates minor movement in the ADT, and creates a unique double tracking sound that a simple short delay cannot create.
The default span of the Varispeed is ±10ms but can be increased to ±20ms.

It creates a non-linear motion in the sound and we can hear the pitch changing with the timing as well.
This is an emulation of the shift in pitch when speed changes on a tape machine, and this varying speed in pitch creates a realistic double tracking sound.

Though the varispeed is made to be moved, moving it by hand is not ideal. We could draw in automation but that would be time consuming as well.
What comes in handy here is the LFO section. 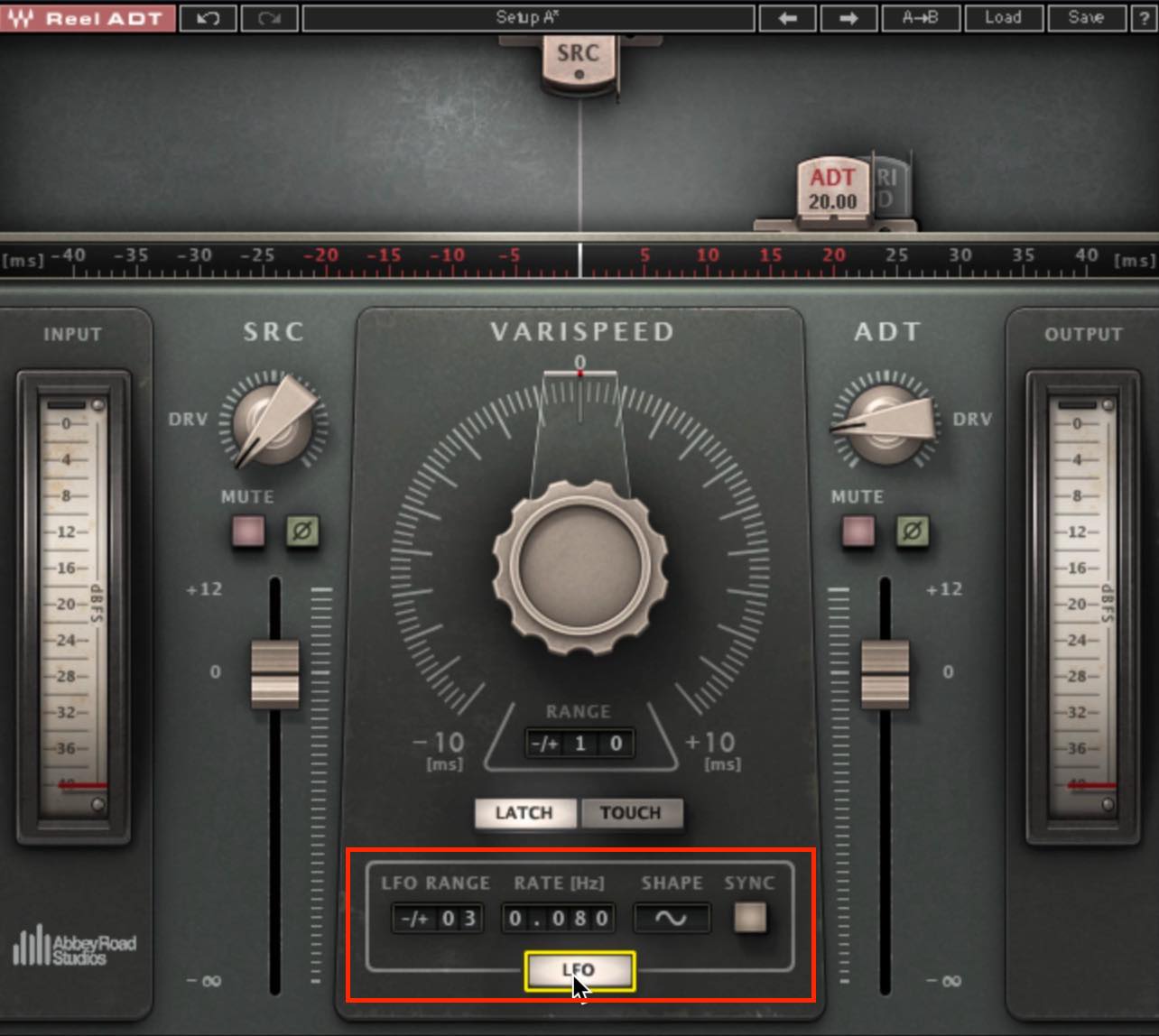 You can apply a cycling movement to the varispeed here. The LFO RANGE is the width of varispeed movement. Rate is the cycle speed. Shape is used to determine the shape of the LFO wave. By using SYNC, you can sync the speed to the tempo set in your DAW with different subdivisions.

A good shape to use for vocal tracking is the Random wave Shape.

You cannot select this parameter when SYNC is ON. When set to random, you cannot select the rate as it does not follow a specific cycle. We can just adjust the range to be a comfortable amount. In this mode, the varispeed knob is used to offset the central point of movement. 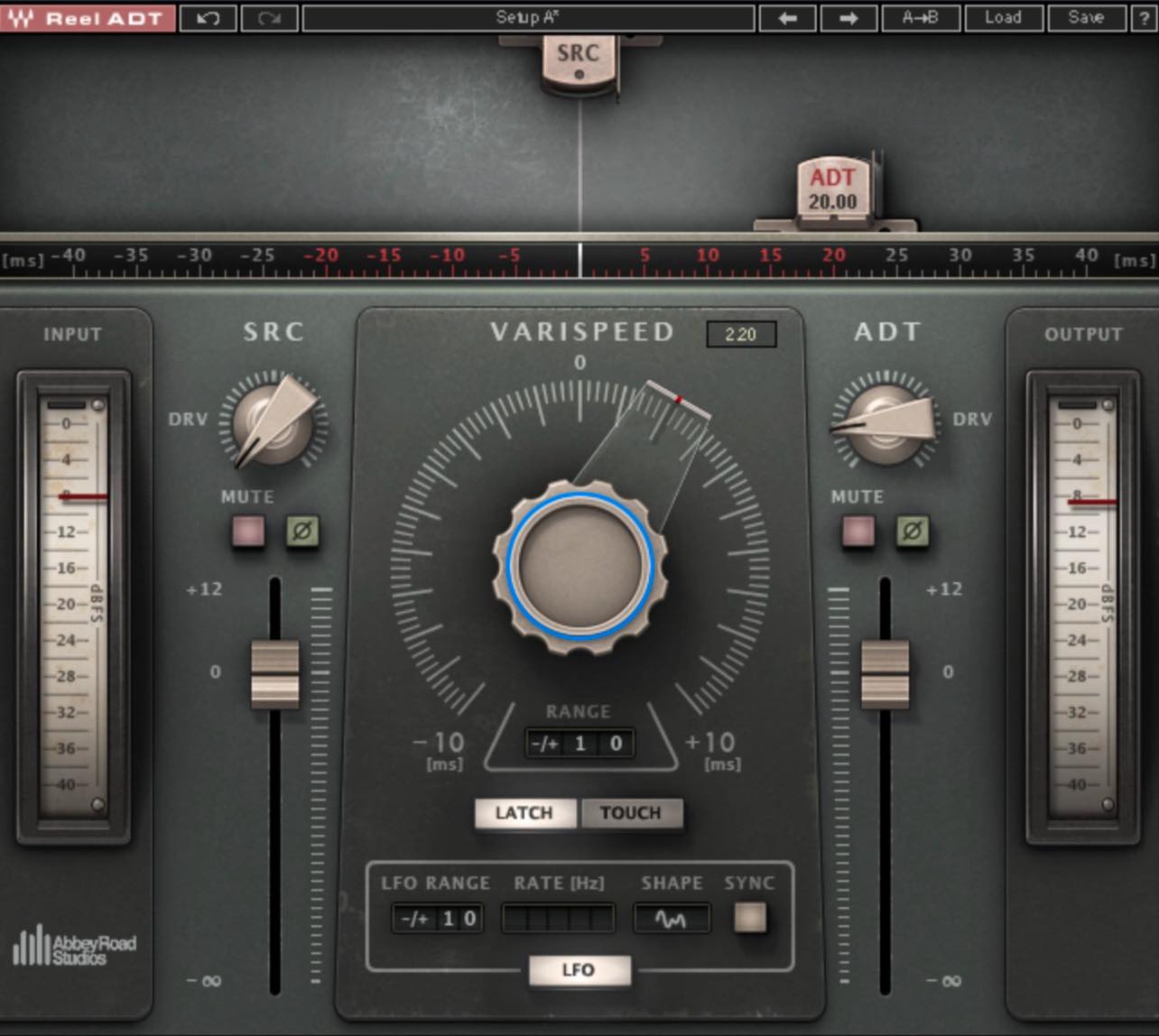 Another great function included here are the drive knobs that allow you to add saturation to the SRC and ADT individually. 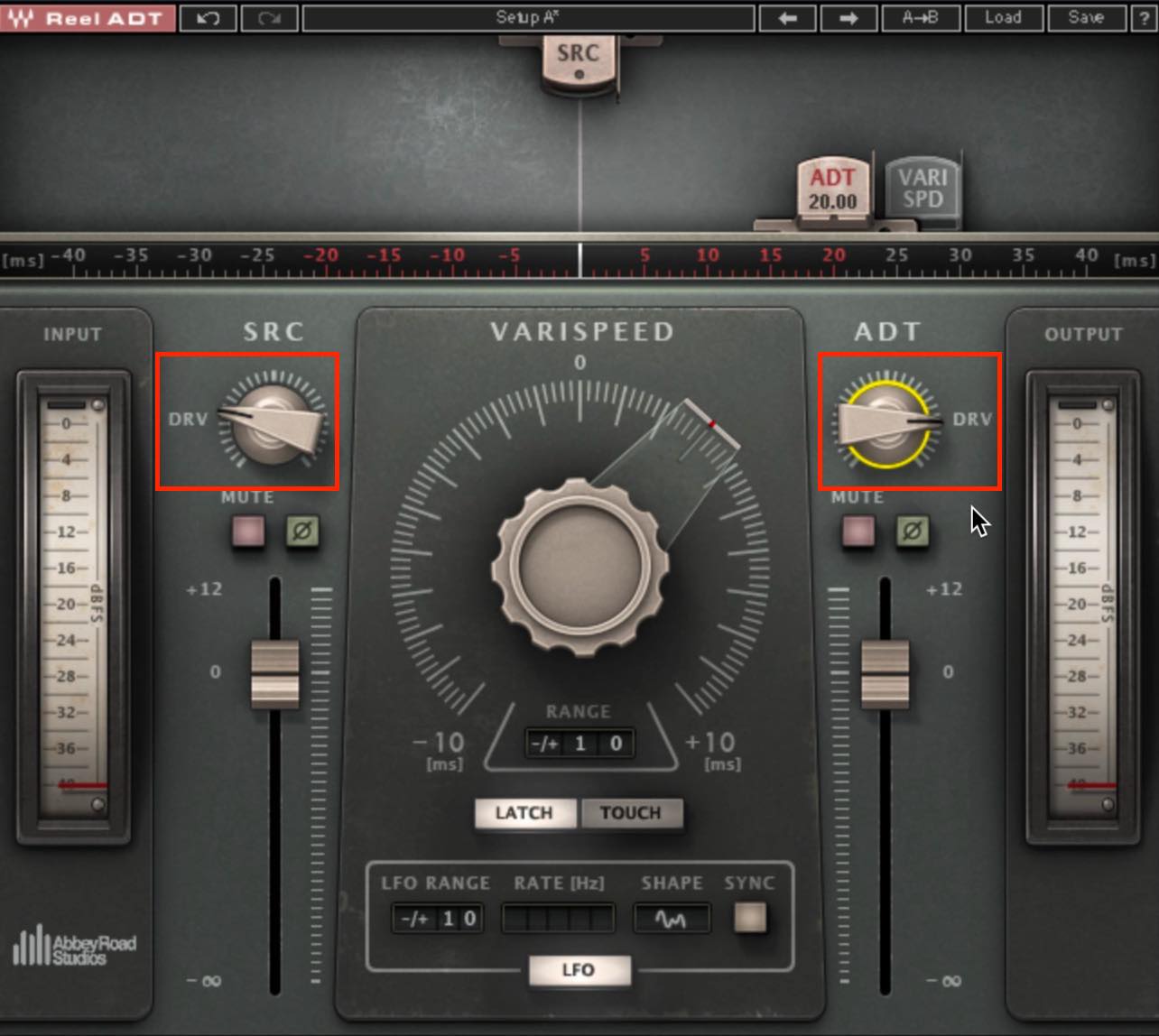 You can add light saturation up to distortion. We can add saturation to make the sound more prominent, or by just saturating the ADT heavily, you can easily get a double tracked sound with one clean and one distorted vocal.
We can hear that saturation helps the vocal blend into the mix better.

If using the stereo version of Reel ADT in a stereo track, you can set the PAN as shown here. 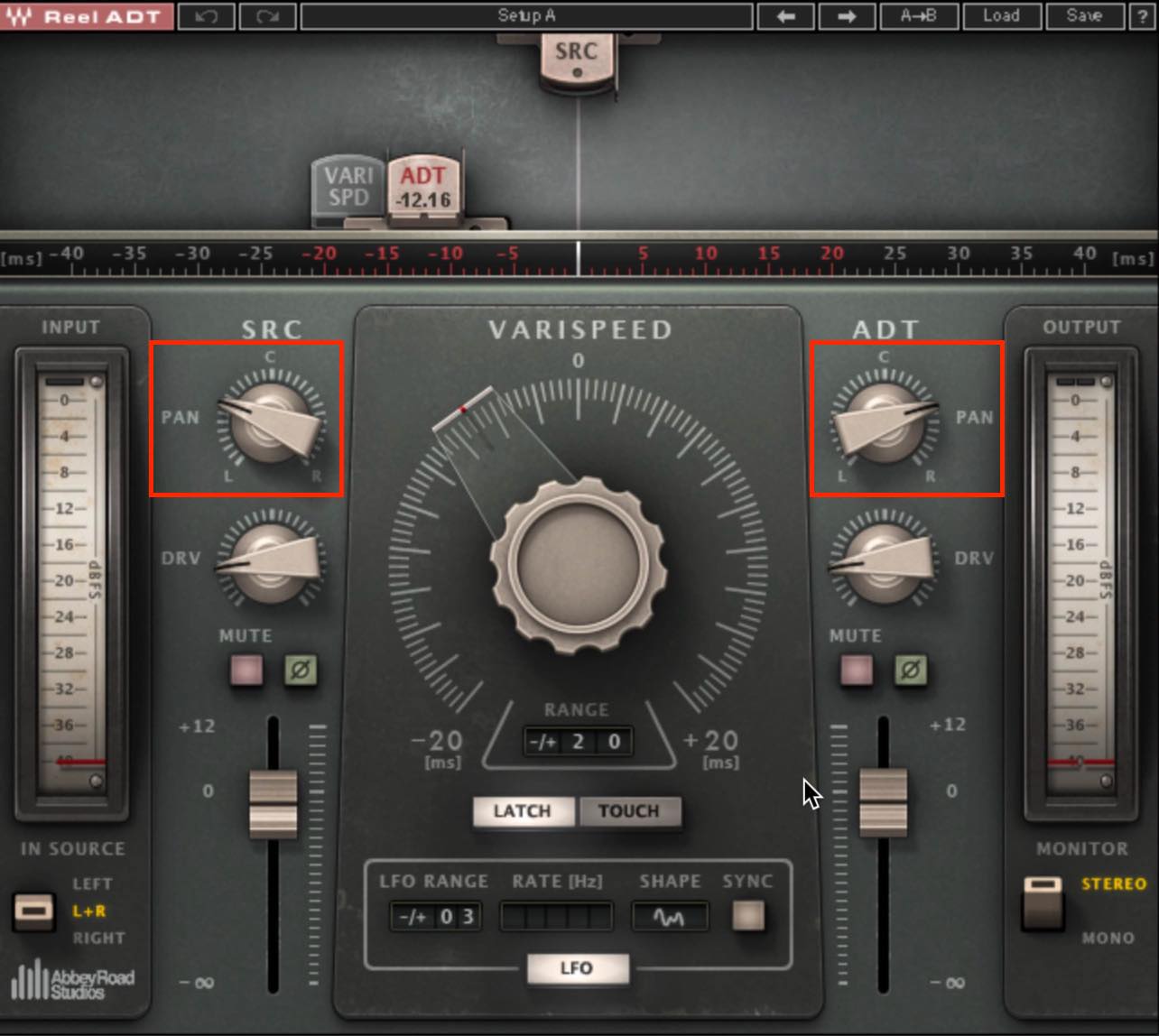