Reverb gives space and dimension to a song, providing an incredibly important effect in music.
In addition, it helps melt a track into the mix of a song.

When mixing there are times when you want to place a deep reverb.

Here are some examples with heavy reverb sounds.

In all honesty,
the sounds are now 「drowning in reverb」.
The impression is too heavy.

This becomes an endless cycle!

We will look at a technique to solve this problem.

Why does the sound end up getting drowned?

The reason for this lies in the「low end」.

Reverberated sounds stand out more in the low end than mids,
and end up sounding murky even at similar volume levels.

Cases where you would apply reverb to kick and bass are rare,
and even when doing so this is a reason you wouldn’t put much reverb.

Once you understand this point its easy. 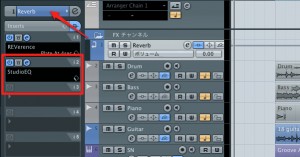 ↑ For most reverb setups, you would apply it to most tracks with a「send & return track」.
Apply a「low cut」to this reverb.

↑ Of course smaller edits should be done depending on the song,
but cutting out frequencies under 200Hz as shown is a safe bet.

※ Though Cubase is used, it works the same way in Protools, Logic

This is how it sounds with the lowcut applied:

The sound is much clearer,
while still retaining the deep reverb.

Try this out if you’re having troubles with your reverb!

Other lessons you can learn from!