This time, we will be looking at creating rhythmic chord tracks using modulations, a technique found in genres such as Future Bass.
The focus will be on controlling the “volume” and “filter” parameters.
We will focus on using XferRecords “LFO Tool” to make expressive tracks quickly and effectively.

First lets hear the track we have prepared for this tutorial:


We can hear that the chord tracks are used to create rhythm and groove in the song as a whole.


This is how the chord tracks sound when solo’d:

When we look at the sequenced material, we can see that the MIDI notes are playing normal extended notes.
This rhythmic motion is being created exclusively through the use of “filters” and “volume” being automated.

Here we will look at how to create this rhythmic chord sound from these extended MIDI notes.

Choosing Chord Sounds and Layering Them 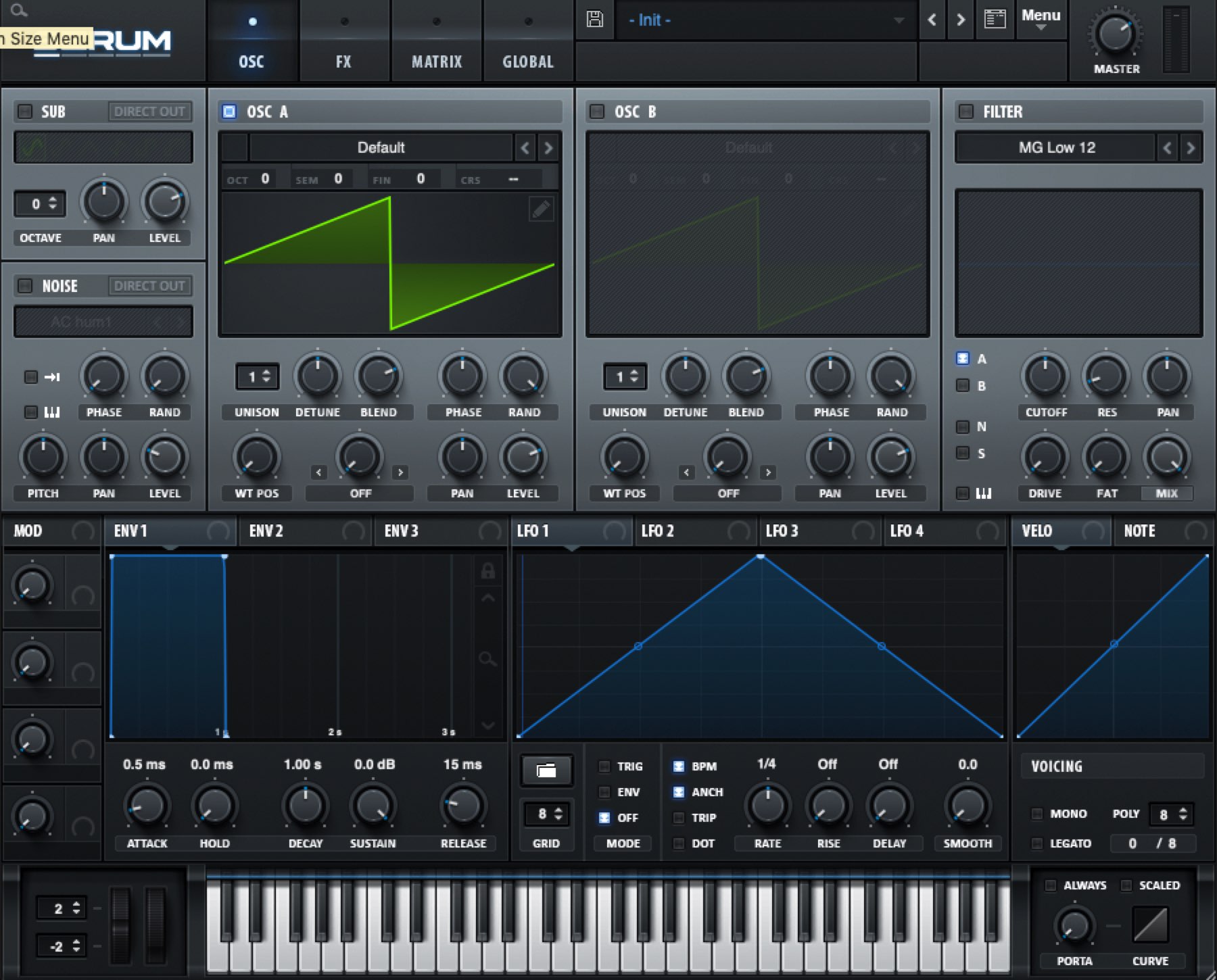 We will create a new track and open up the soft-synth “Serum”.

Serem is a popular wavetable type synth, and contains rich high frequencies and a sharp sound that is created through its various saturation and multi-band compression style effects.
Having a plethora of high frequency content and harmonics is crucial when creating rhythm using filter modulation. 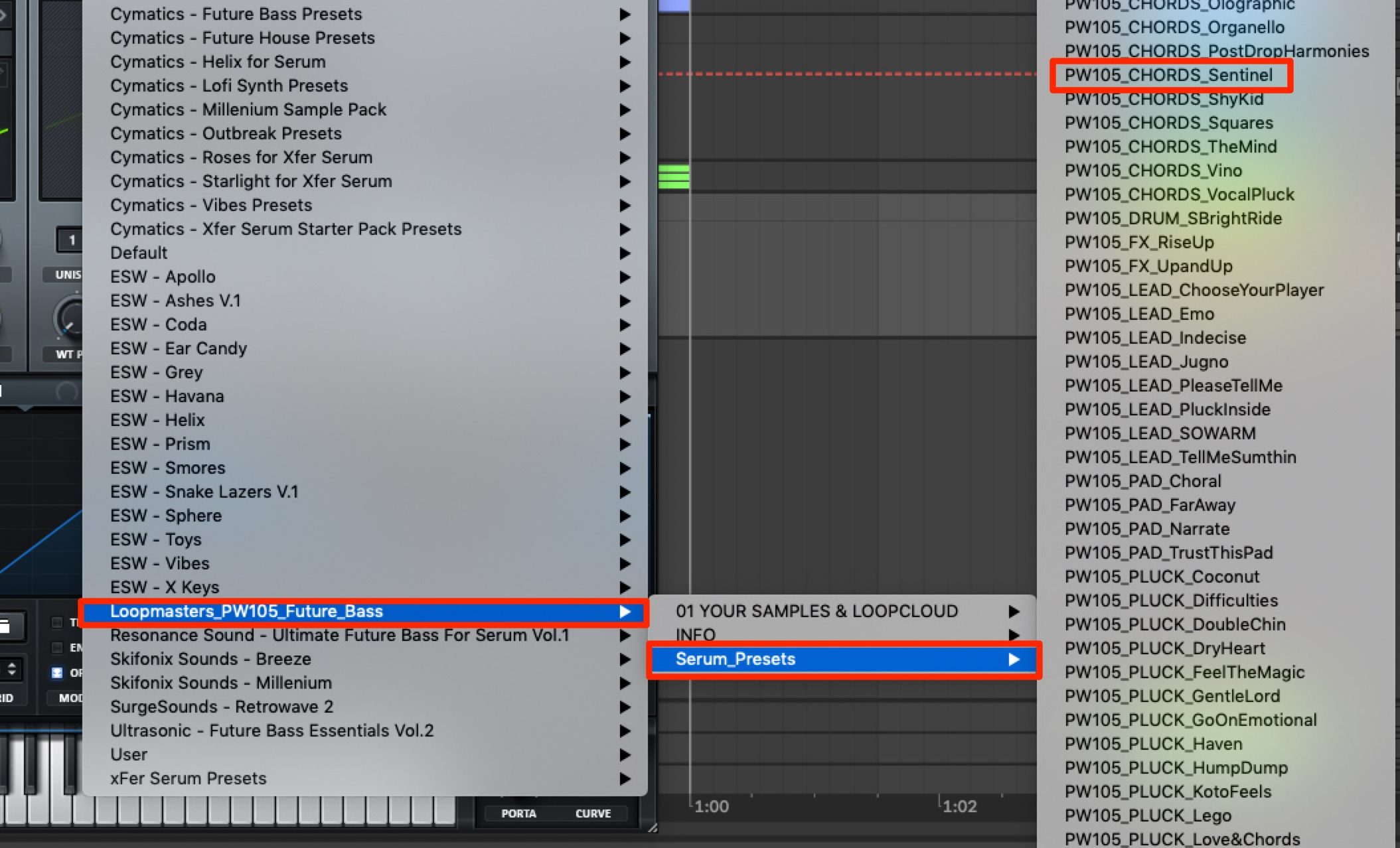 For this tutorial, we will be using a Future Bass preset called “Loopmasters Patchworx 105“.

Because 1 track alone lacks thickness, we will layer another Serum track over it. 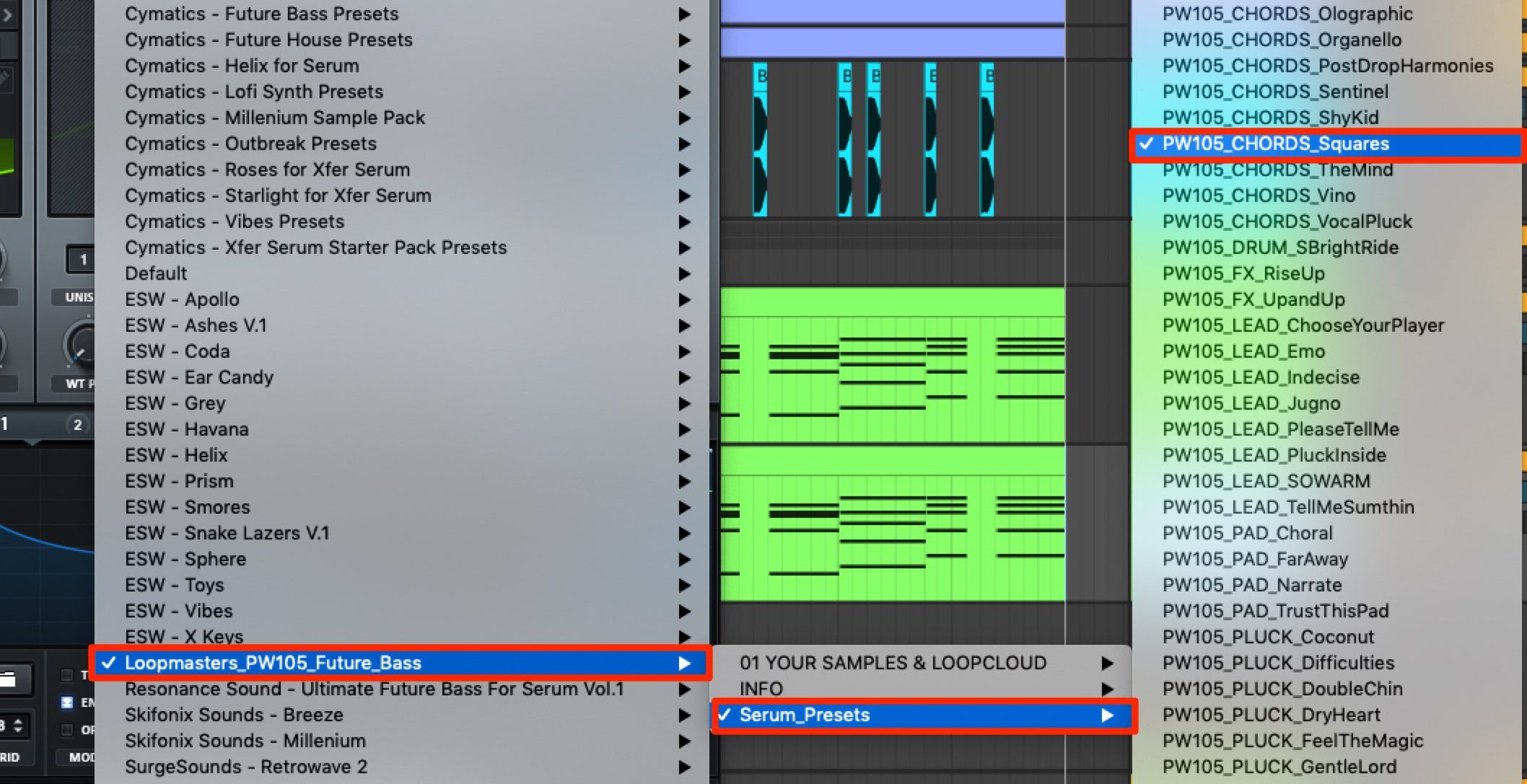 The next Serum track will be using the “Loopmasters Patchworx 105” preset to fill in the mid-range frequencies.

We will layer another track using the same steps. 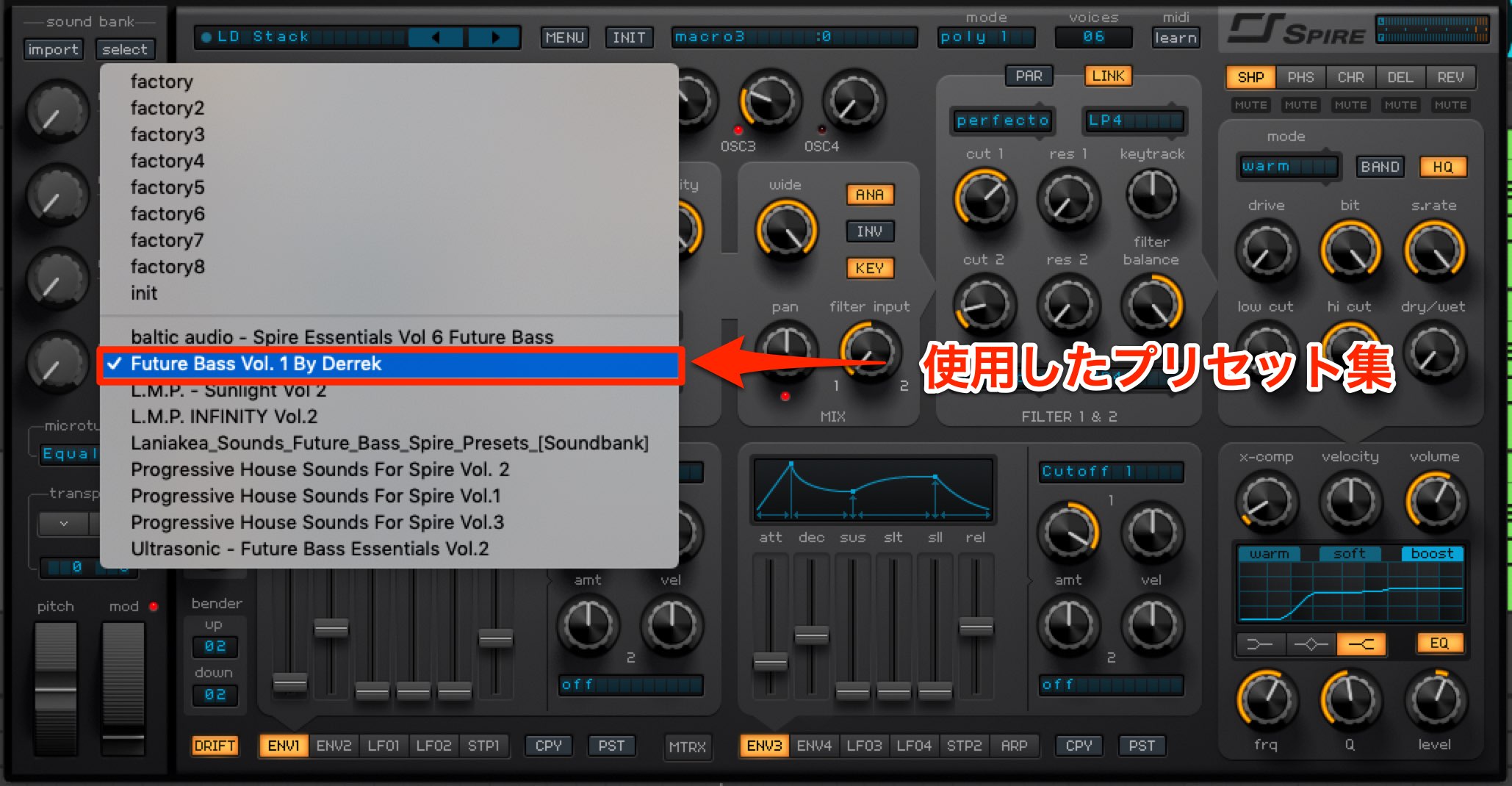 Layered synths will sound more varied by using different types of synth sounds.
For this reason, we will be using Reveal Sound’s “Spire” synth as our 3rd layer.

We will be using the “Future Bass For Spire Vol.1” preset for Spire.

Now we will look at creating rhythm in our chord tracks. 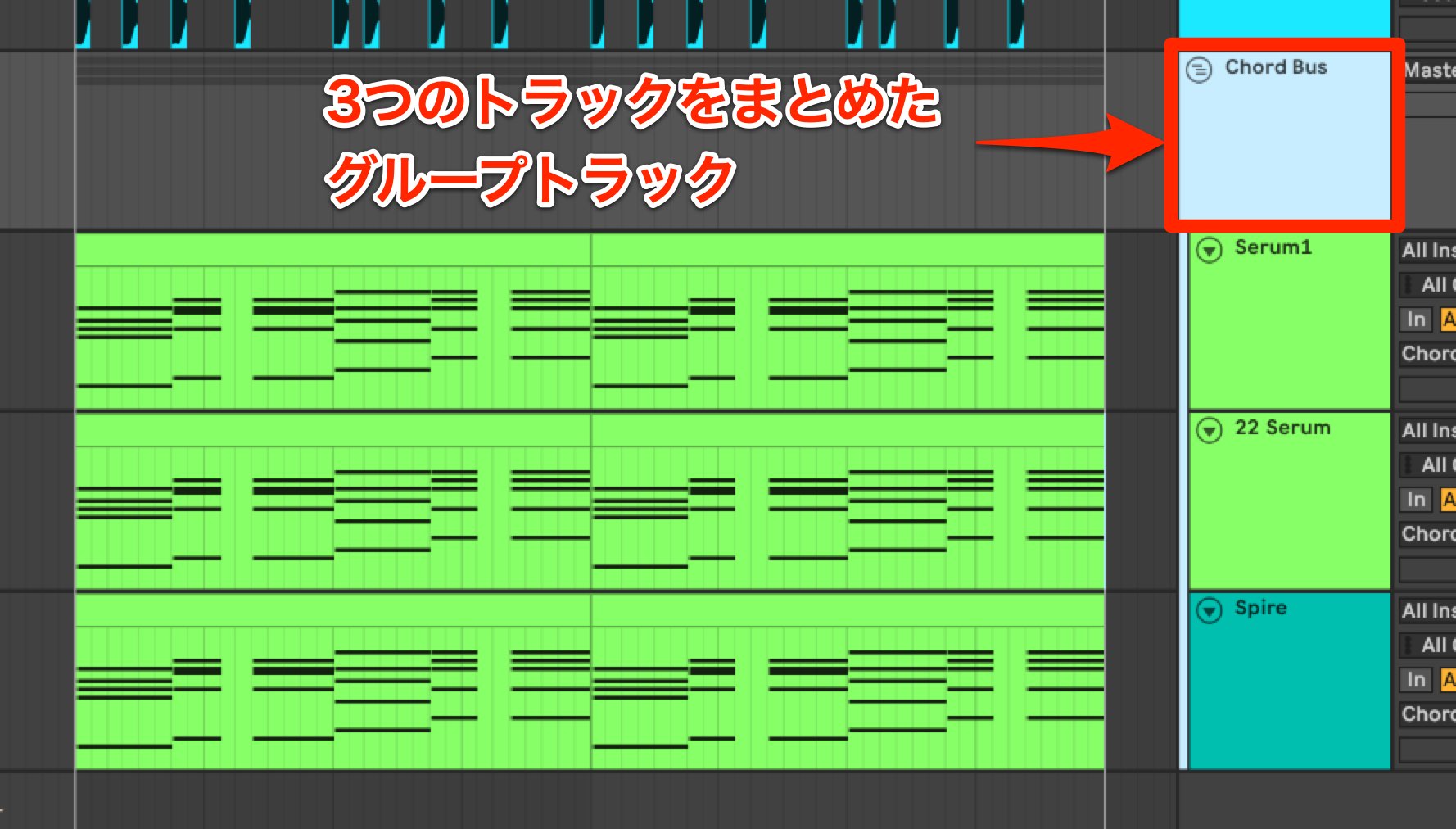 To lay down the ground work, we will group the 3 chord tracks into 1 channel.
By doing so, we can apply 1 effect unanimously across all the tracks.

We will be using “LFO Tool” to add motion to the chord sounds.

The effect allows you to use the built in LFO to control volume/filter parameters in a cycle.
In addition, the LFO curve can be drawn in freely as well.
We will be drawing in a slow attack and gradual decaying curve for this tutorial. 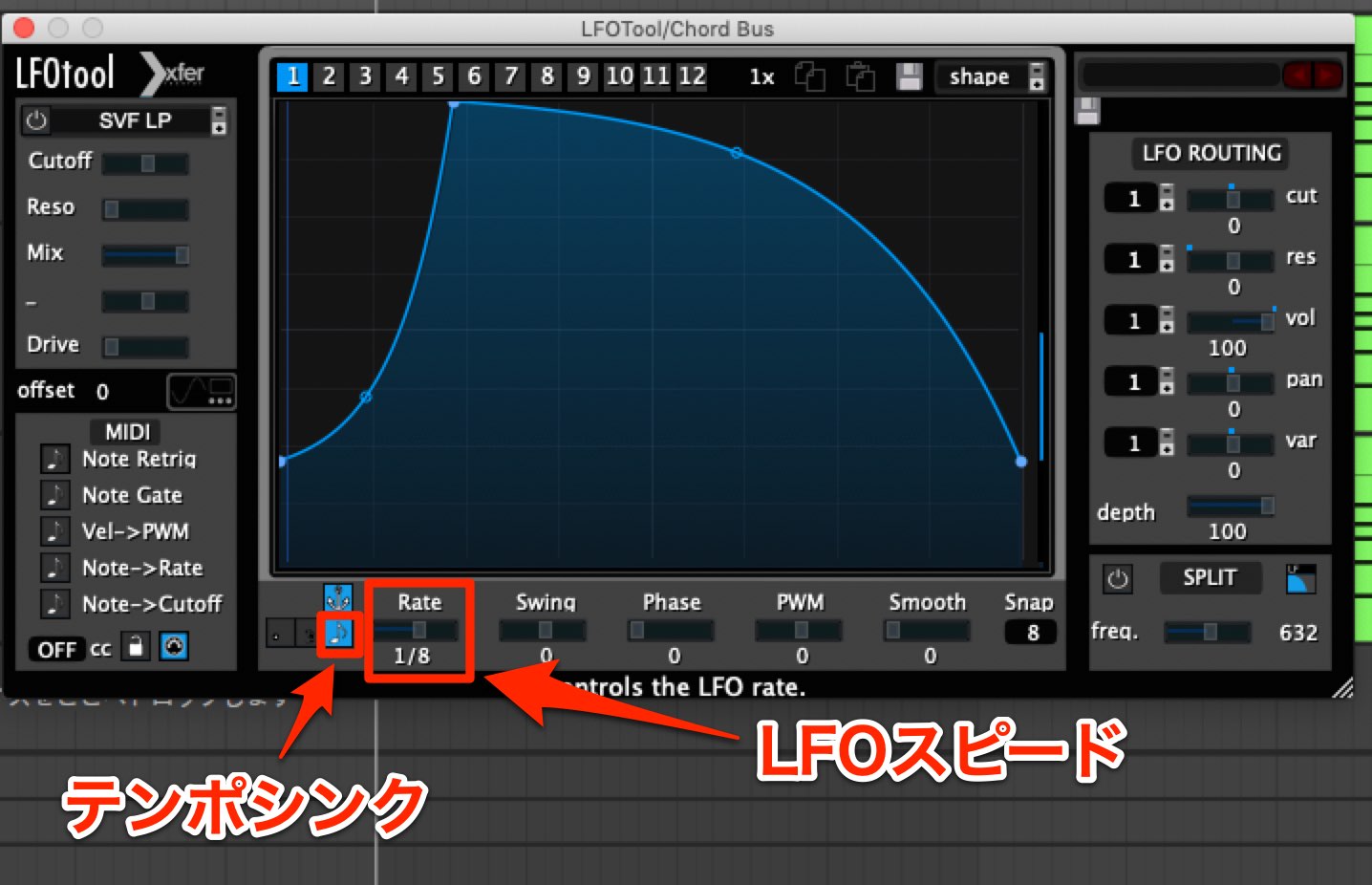 The LFO cycle speed can be changed from here.
We have turned tempo sync on and set the subdivision to 8th notes for the time being. 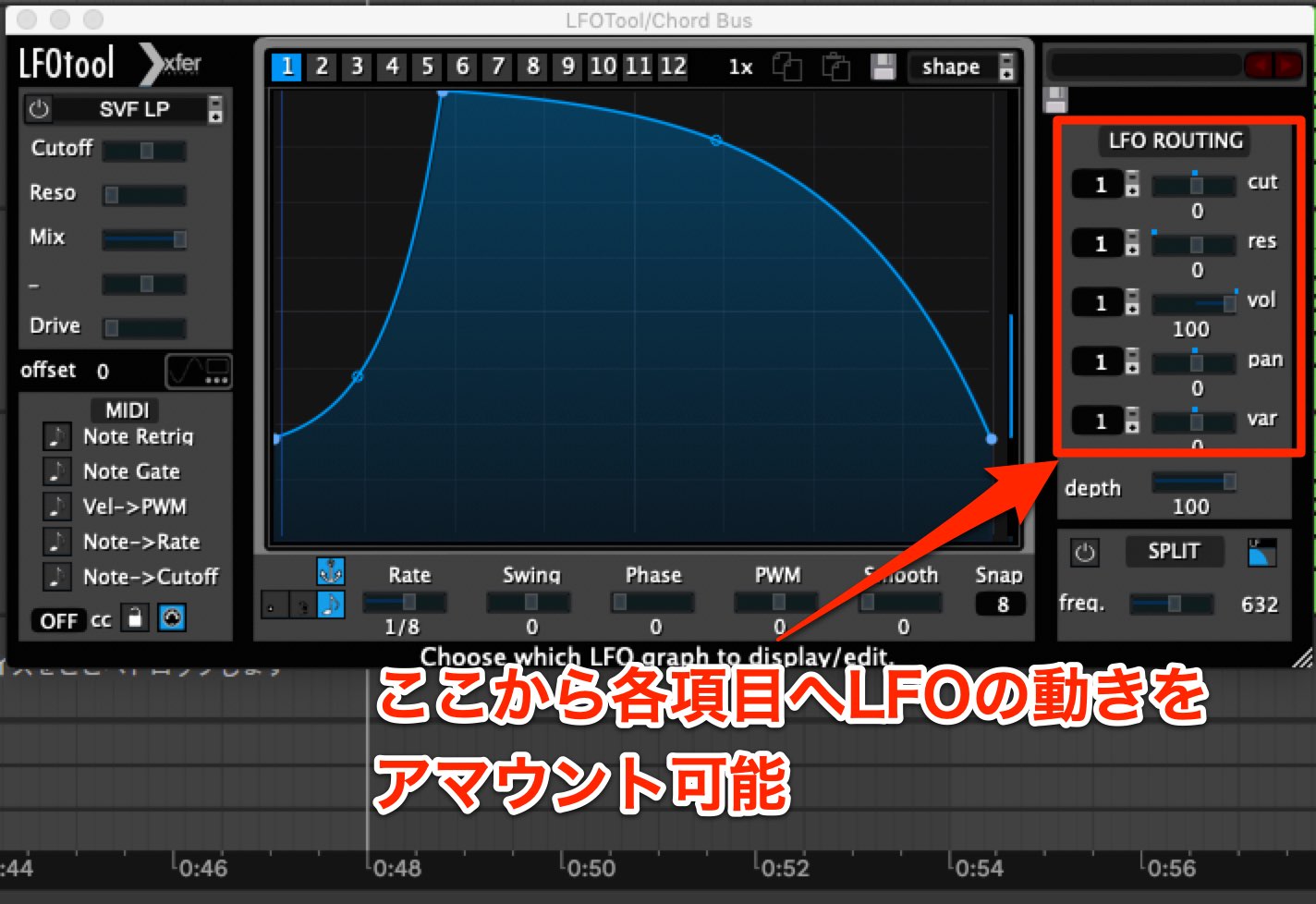 The LFO Tool is applied to the volume as a default setting.
To effect other parameters, be sure to adjust the amount (strength of effect) of the desired parameter. 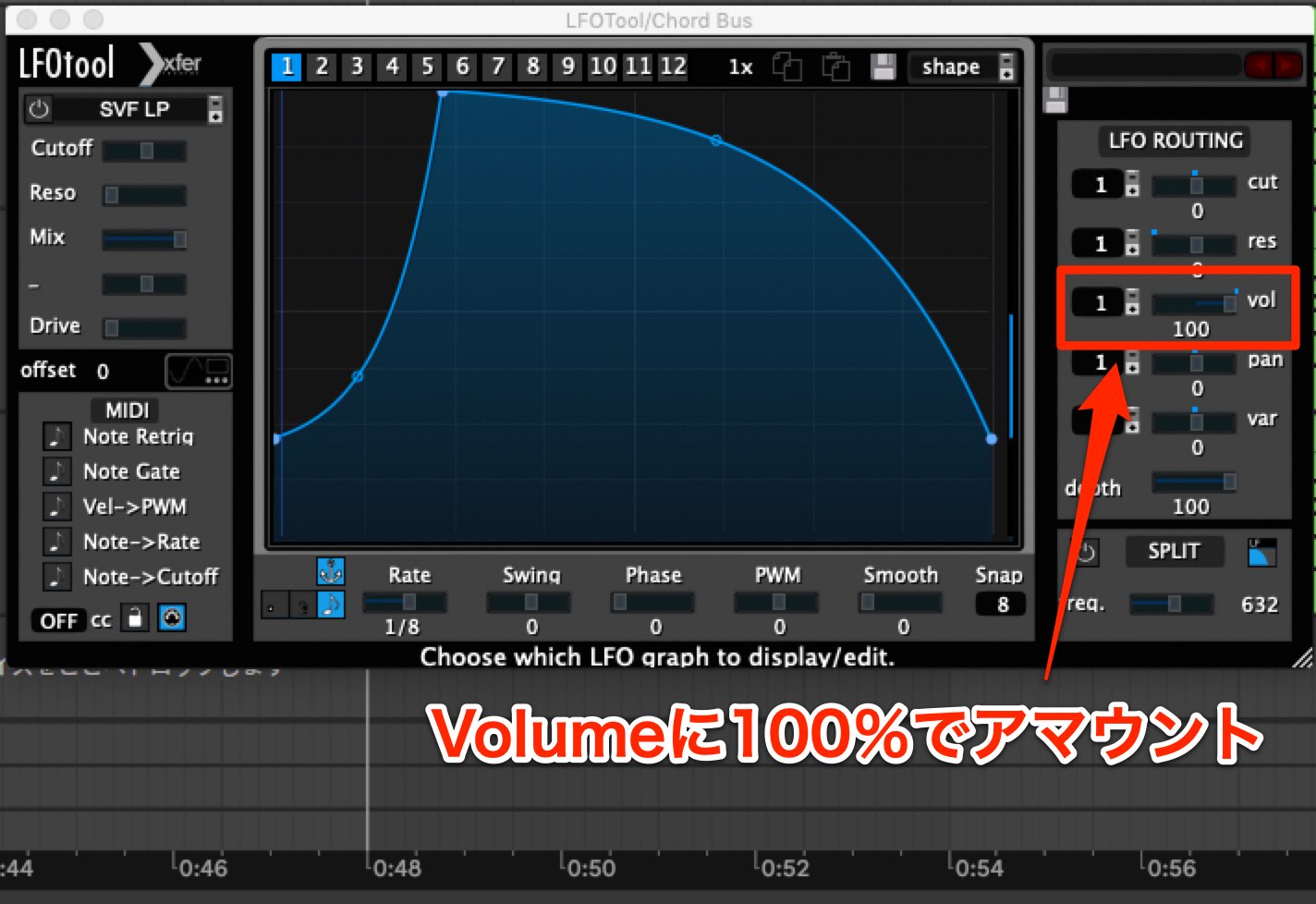 For this tutorial we will be using the default volume setting. 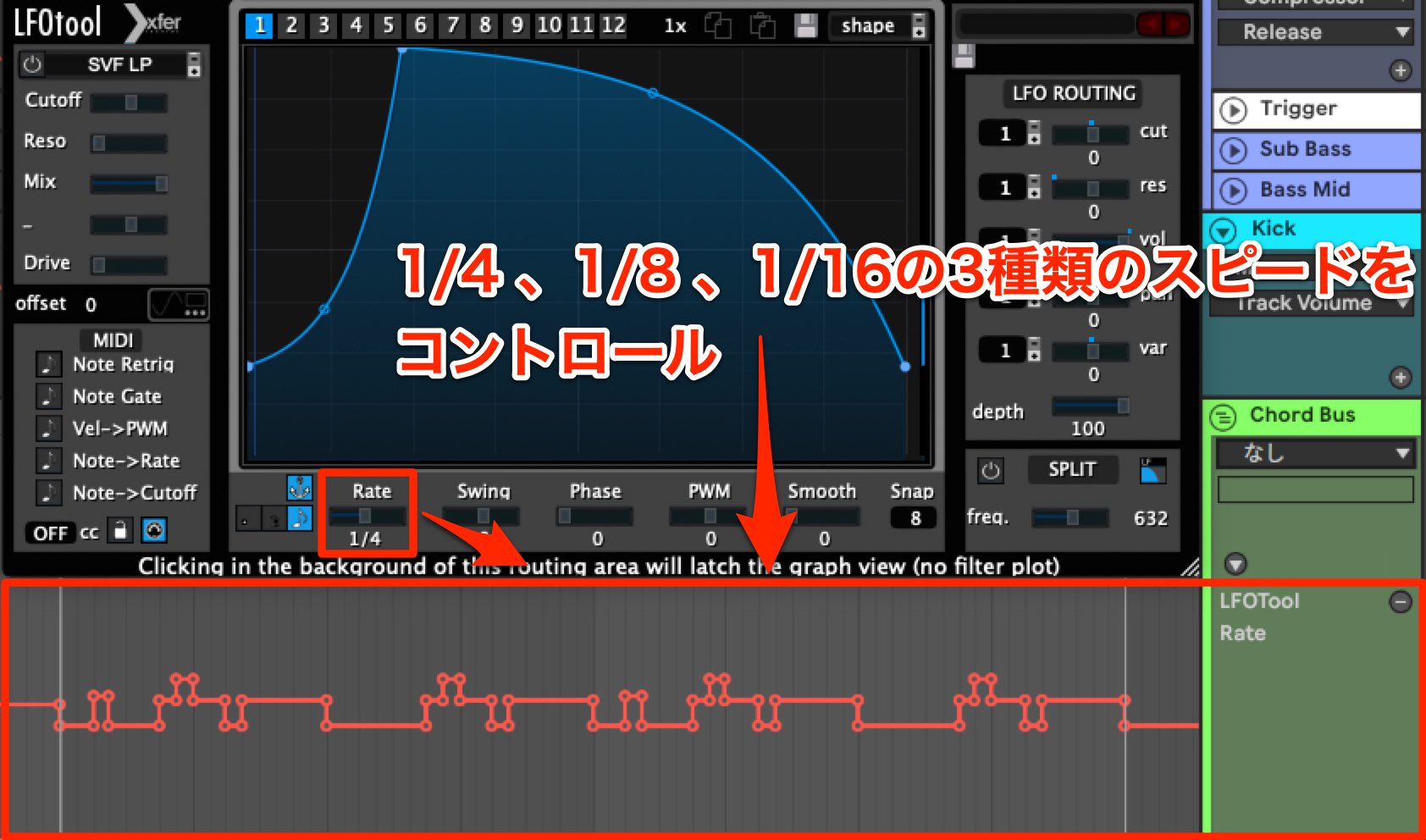 As seen, we will display the LFO speed amount automation.
We will be adding in 4th, 8th, and 16th note variations while previewing the sound.
Triplets may work to create interesting effects depending on the song as well.

Though volume alone allows you to create motion in chord tracks, by combining it with filters, you can create an even more aggressive movement.

We inserted a filter effect on the track and setup a low-pass filter.
We will now add in automation for the cut-off amount.

By dropping on areas that overlap with the kick, we can create a side-chain compression like effect as well. 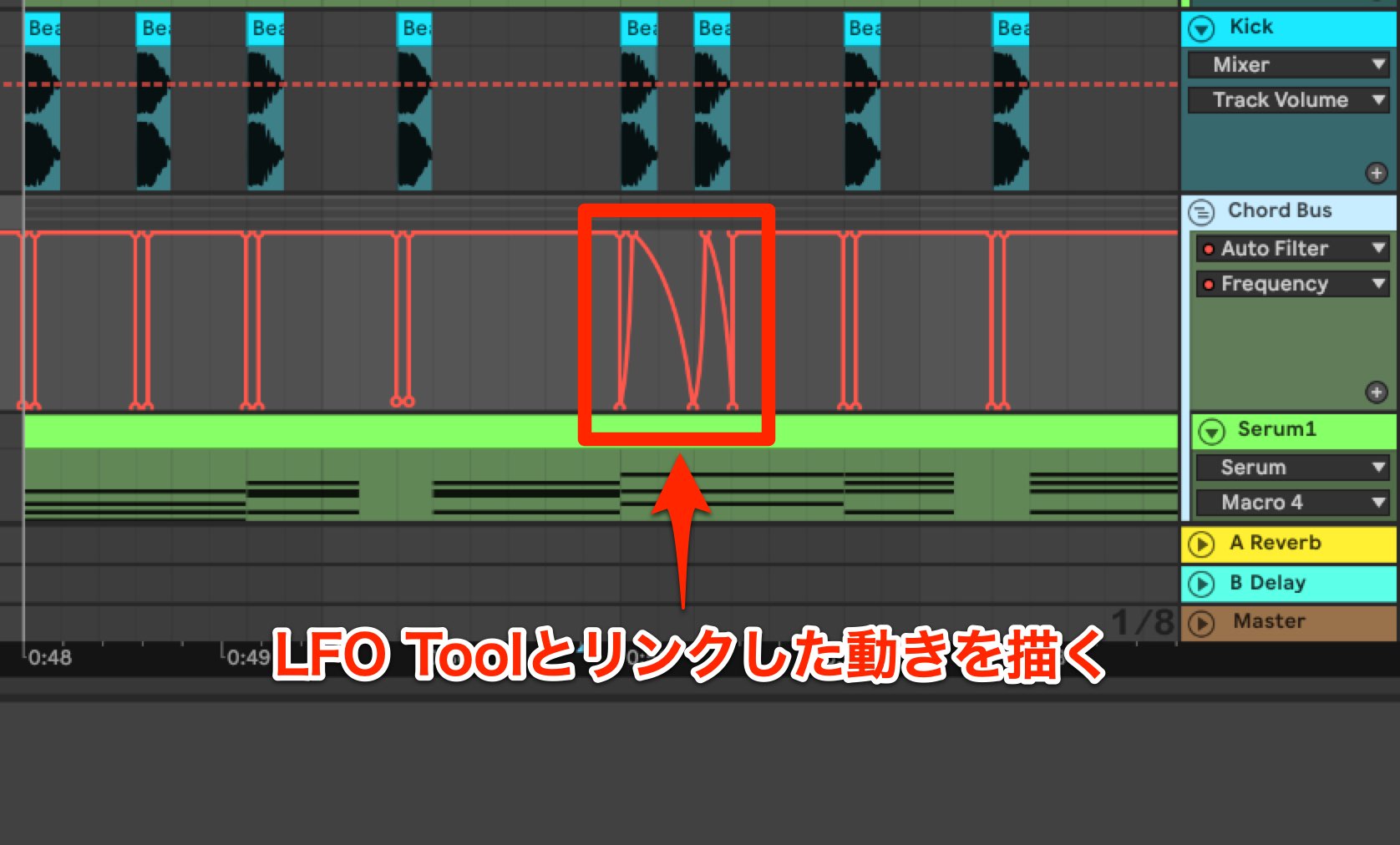 We will match moments in the volume automation with the filter cut off that we want to enhance in the song.
By syncronizing this timing, the change in sound becomes greater, and creates a more obvious rhythmic effect.

Finally we will draw in an automation curve that creates a delayed sort of attack.
This curve will shift the center of the rhythm to create a heavier laid-back feel.

We hope you enjoyed this tutorial.

By using effects to create a rhythmic approach, you can create more complicated and dynamic sounds.
This kind of editing is prominant in recent styles of electronic music, so be sure to try it out in your own tracks!