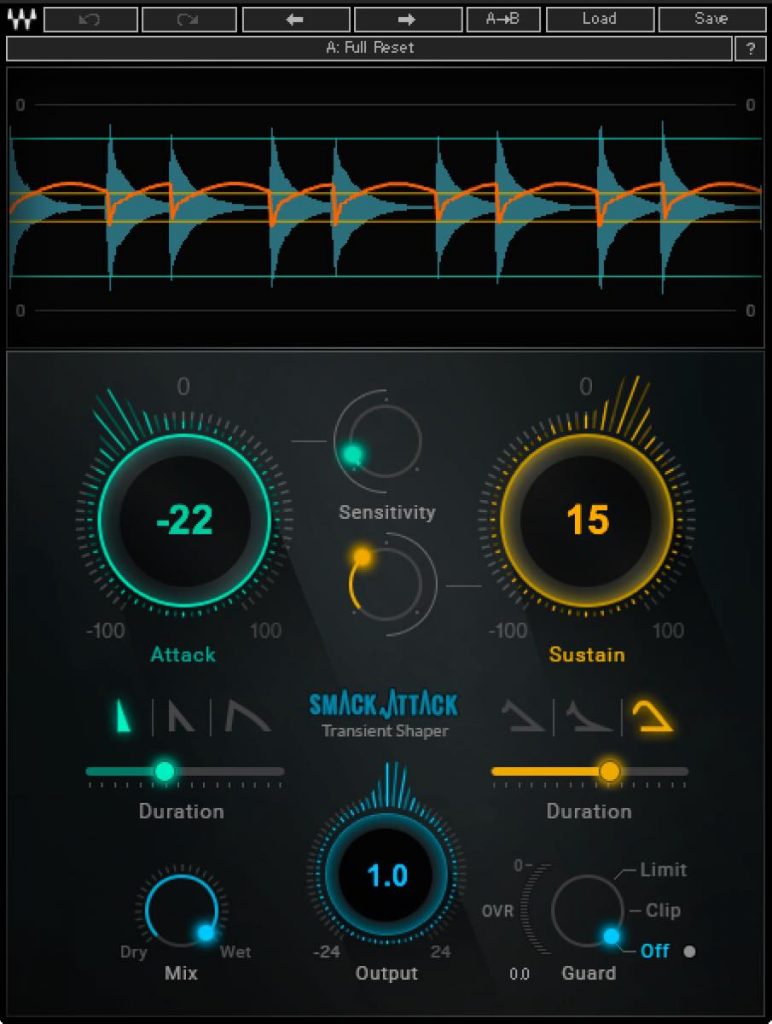 In this TIPS tutorial we will be looking at using Waves Smack Attack to control transients, and focus on techniques to manipulate depth within your mix.

When controlling depth in a mix, elements such as volume, high frequencies, transients, and reverb amounts are used, but transients are particularly difficult to control.
Though the most common effect to use is a compressor, it is difficult to keep the original nuance of the sound while only making adjustments to the transients.

Lets take a look at Smack Attack as well as how to utilize it.

We have a sample track prepared, and start by focusing on the distancing of the kick and snare in the mix.

While the kick sounds relatively forward in the mix, the snare sounds a little further behind, creating a weird inconsistency in the depth of the sounds.
Though the kick and snare are set to playback at similar levels, the key to figuring out the correct depth for the two sounds lies in the transients.

We’re using a drum software and are unable to see the waveforms of the sound.
However, by using Smack Attack, we can take a look at the transient shapes of the waveform.

Lets open up Smack Attack and take a look.

Lets start with the snare. To bring it forward and closer to the kick, we must emphasize the attack.
We’ll first raise the large Attack knob. 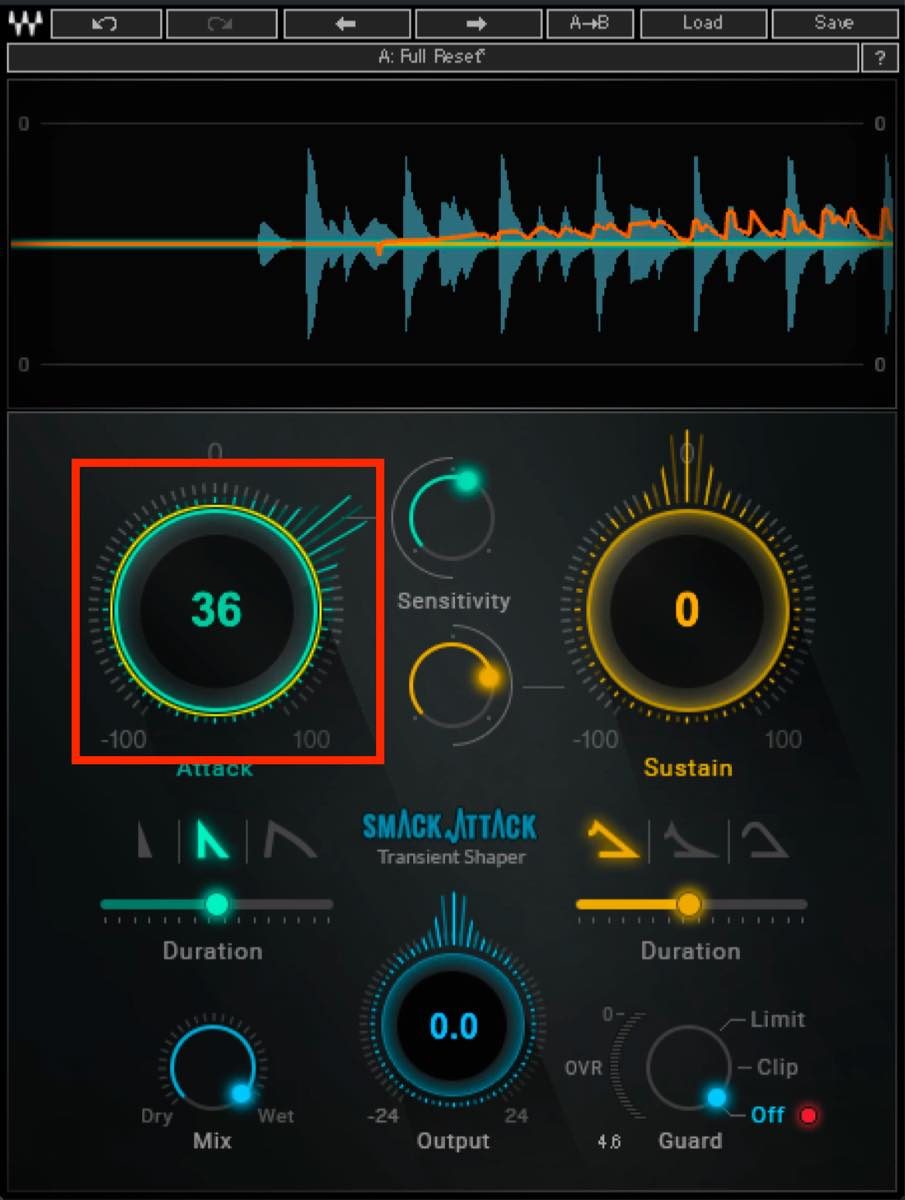 The attack is now clearer and the sound feels further forward in the mix. However, at the moment the ghost notes and other nuanced sounds are enhanced, and the performance feels off.
To remedy this, we will adjust the Sensitivity. The Sensitivity was set too strong, so we will turn the knob left to lower it. 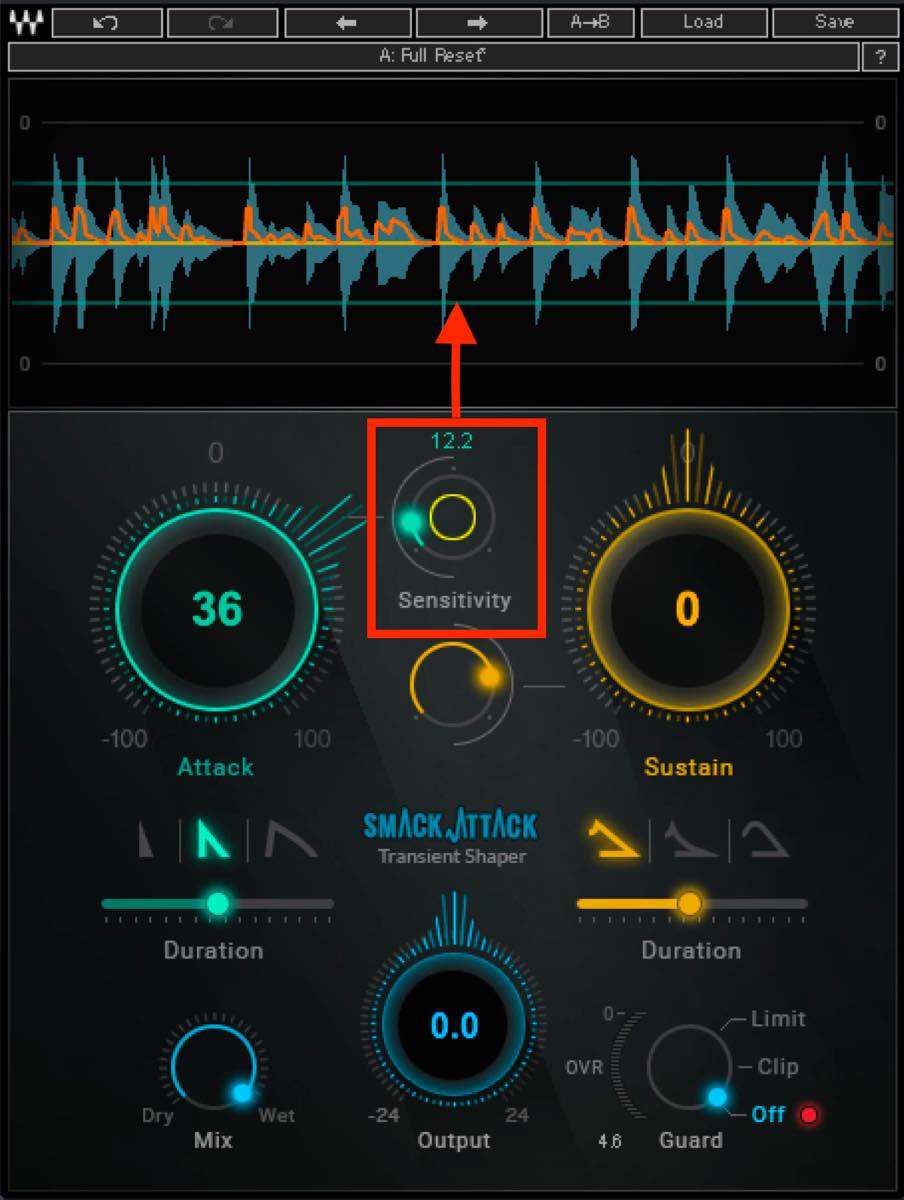 Take a look at the audio graph above. The waveforms are shown and you can see a threshold level as to what points are having their attack enhanced.
We will be adjusting the parameter to ensure that just the large waveforms are effected.
The orange line allows us to visualize how much the sound is being enhanced/suppressed by Smack Attack.

Next we will select the type of shape to enhance the attack. 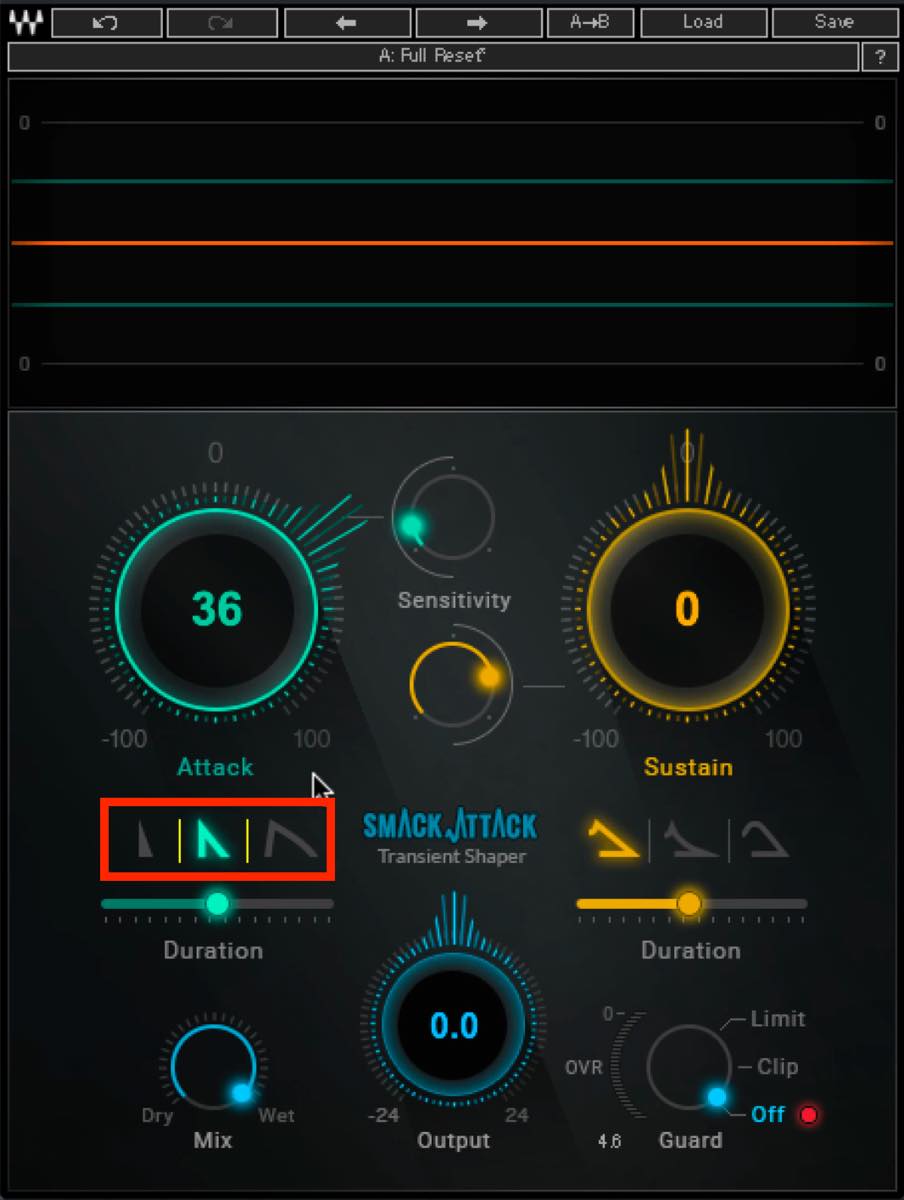 As seen, we have the sharpest needle on the left, blunt on the right, and nail in the middle.
Because we want to keep the thickness as well for this particular snare, we will select nail to get the best attack and punch.

Next we have duration. Duration determines the span of time that the attack is enhanced. 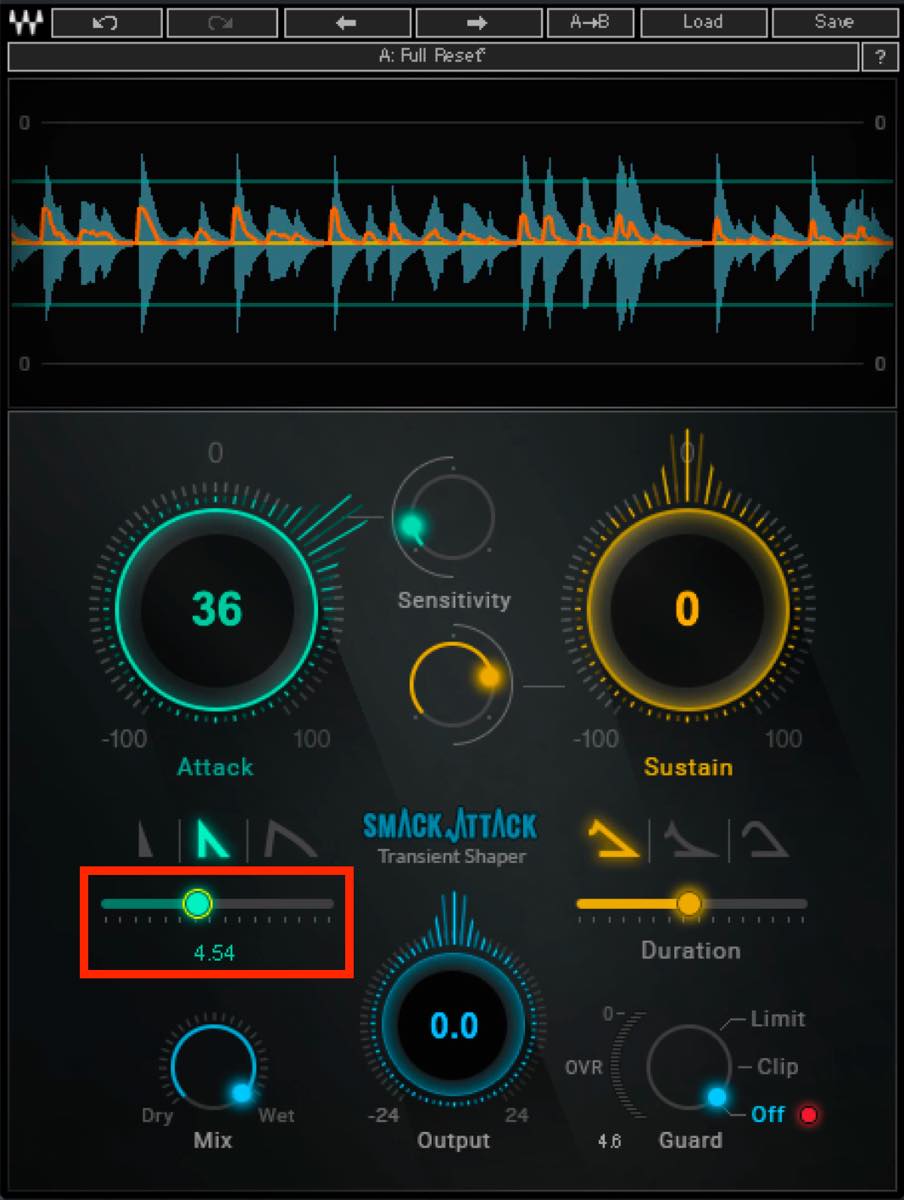 Be aware that if set too long, rather than shaping transients you end up raising the overall volume of the sound.
Keep an eye on the graph to try to set the orange line to go down before the actual audio’s waveform does.

Guard on the right works like a limiter, and because the levels aren’t currently peaking we have left it off, but you can utilize it to further sculpt your sound as well.
Limit on top works purely as a limiter, while Clip adds saturation to peaking levels to limit them.
Lets try using Clip as an example and raise the levels on purpose. 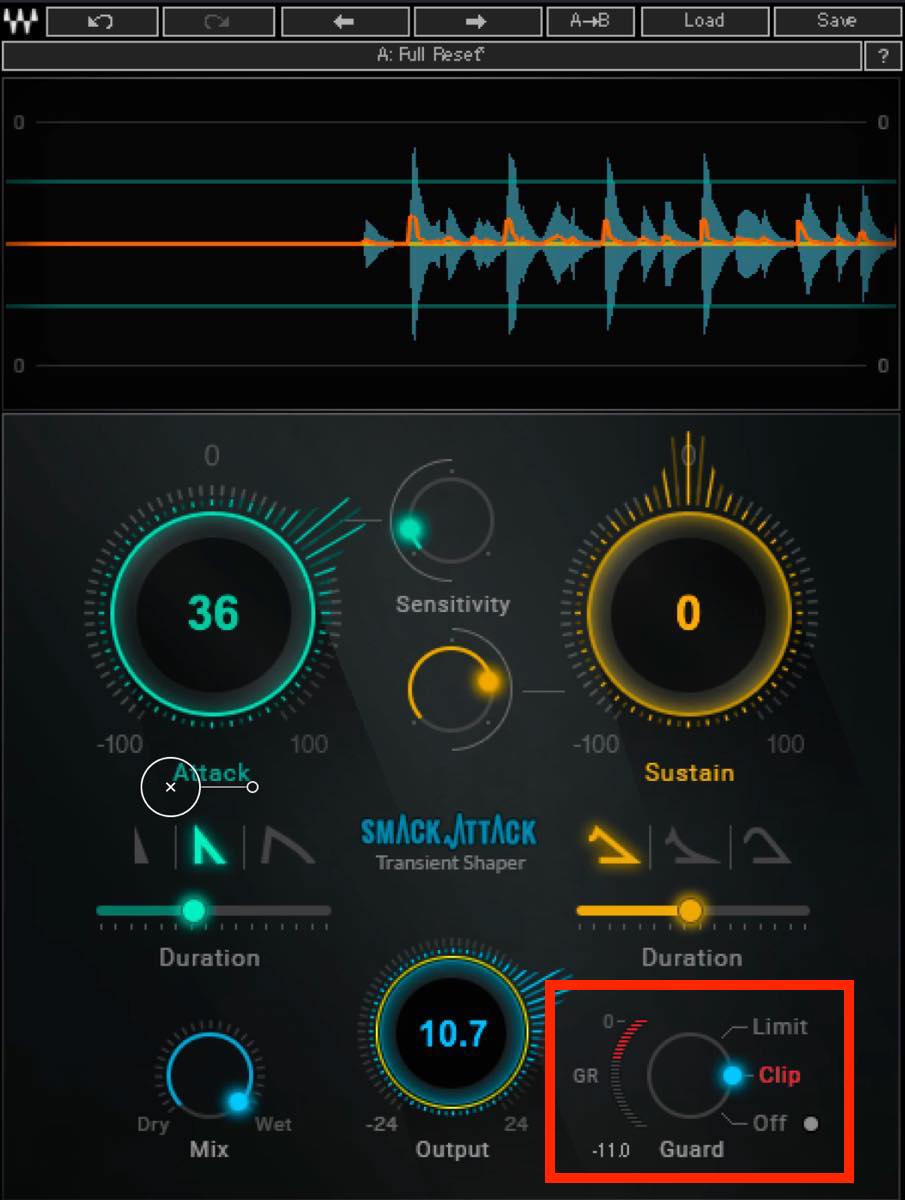 When compared to Limit we can hear that there is more of a tonal change to the sound. Using the clipper to get different types of tones is another way to utilize this plugin.

Lets return the output back to normal and bypass the effect to compare the sounds.
Rather than hearing this effect solo’d, we’ll listen to it in the context of the entire mix.

When compared to the bypassed sound, the attack is clearer and the snare is more upfront in the mix.
We’ve bridged the distance between the snare and kick by quite a bit.

Pushing back sounds that are too far forward

Lets try adjusting the kick as well. The attack is a little too sharp so we will lower the Attack knob to push the sound further back. 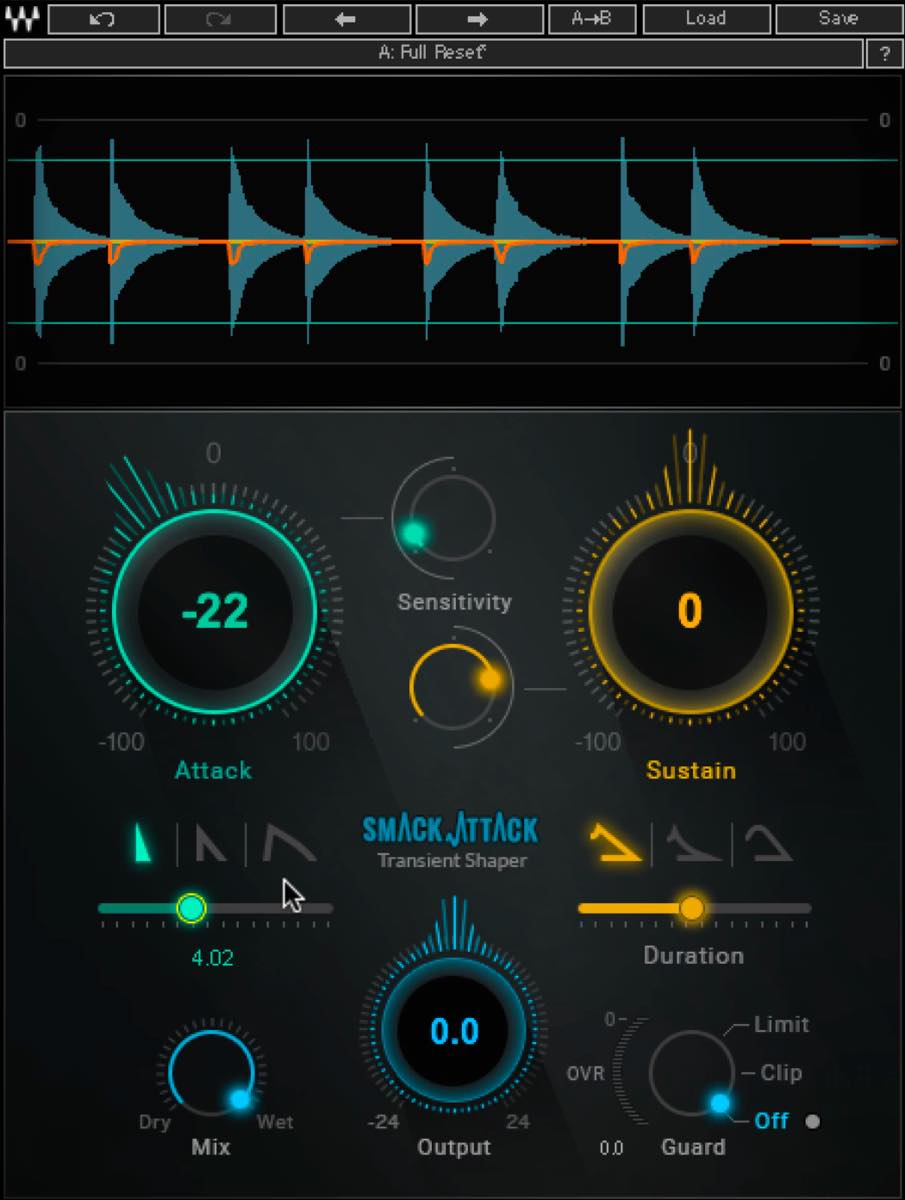 Adjust Sensitivity to hit around the peak of the waveforms, and select Needle to match with the waveform shape. We’ve set the duration on the shorter side as well.
We will raise the output slightly to make it easier to compare with the bypassed signal.

Even at this point, the kick is much softer, and the sound feels a little further back, helping bring the placing of the snare & kick together.

Lets edit the Sustain on the kick as well. By increasing the tail sound we can get a fatter and warmer sound.
First start by raising the Sustain knob. 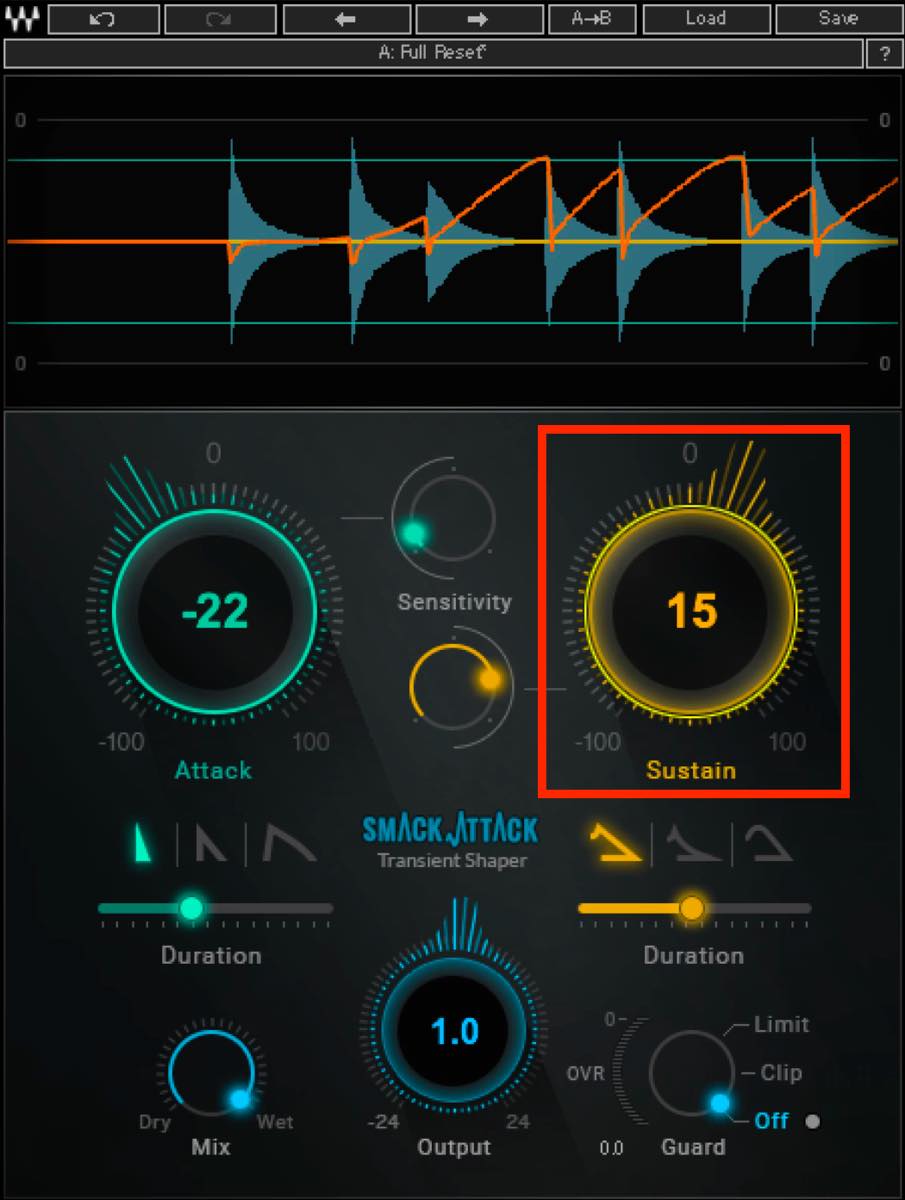 At this point we have plenty of effect being applied.

Sensitivity is currently being applied to all the sounds, so we will set it a little lower. Use the audio graph as a reference to help find the right amount of tail for the sound. 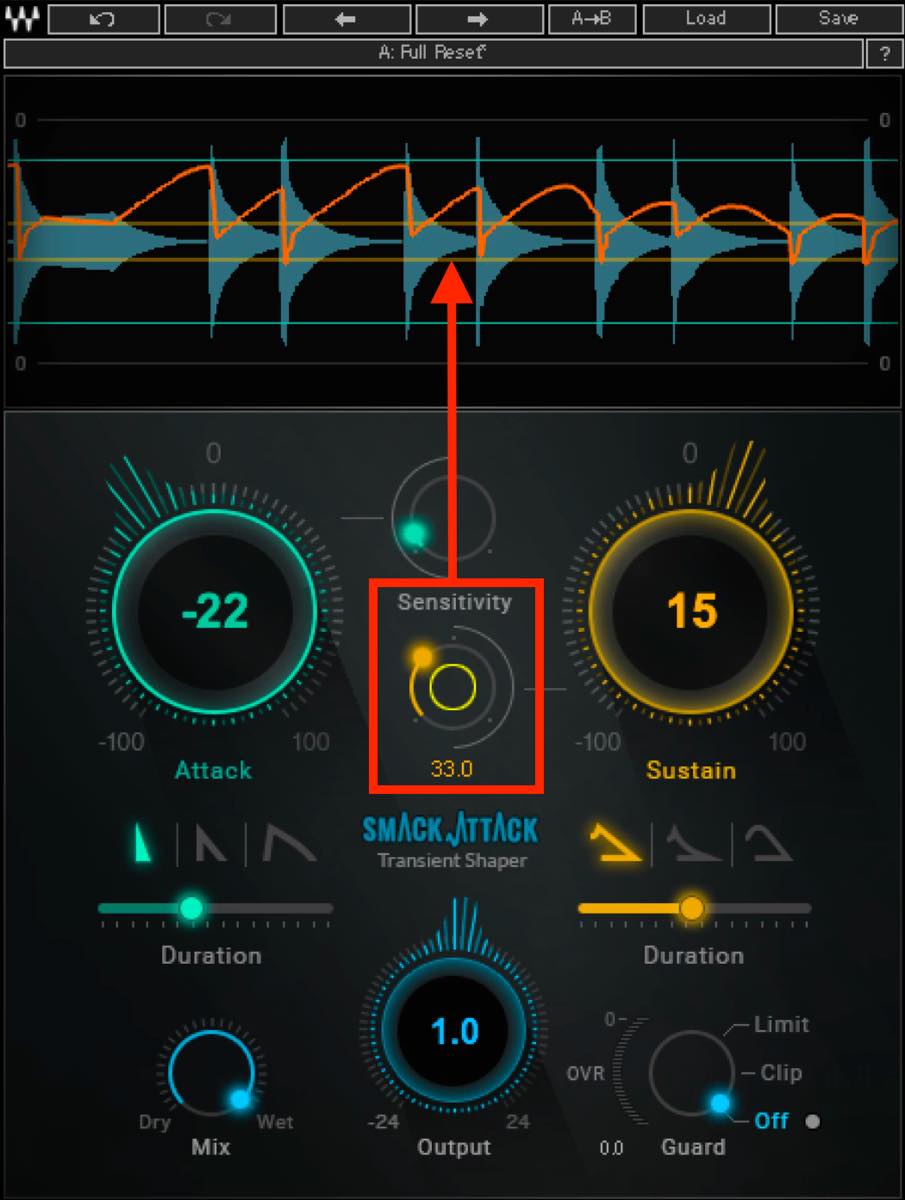 Next we have the shape. We have the straight decaying linear on the left, the quickly decaying non-linear, and the gently decaying soft linear.
This effects the softness of the kick, so compare the sounds to find the right one for the track. 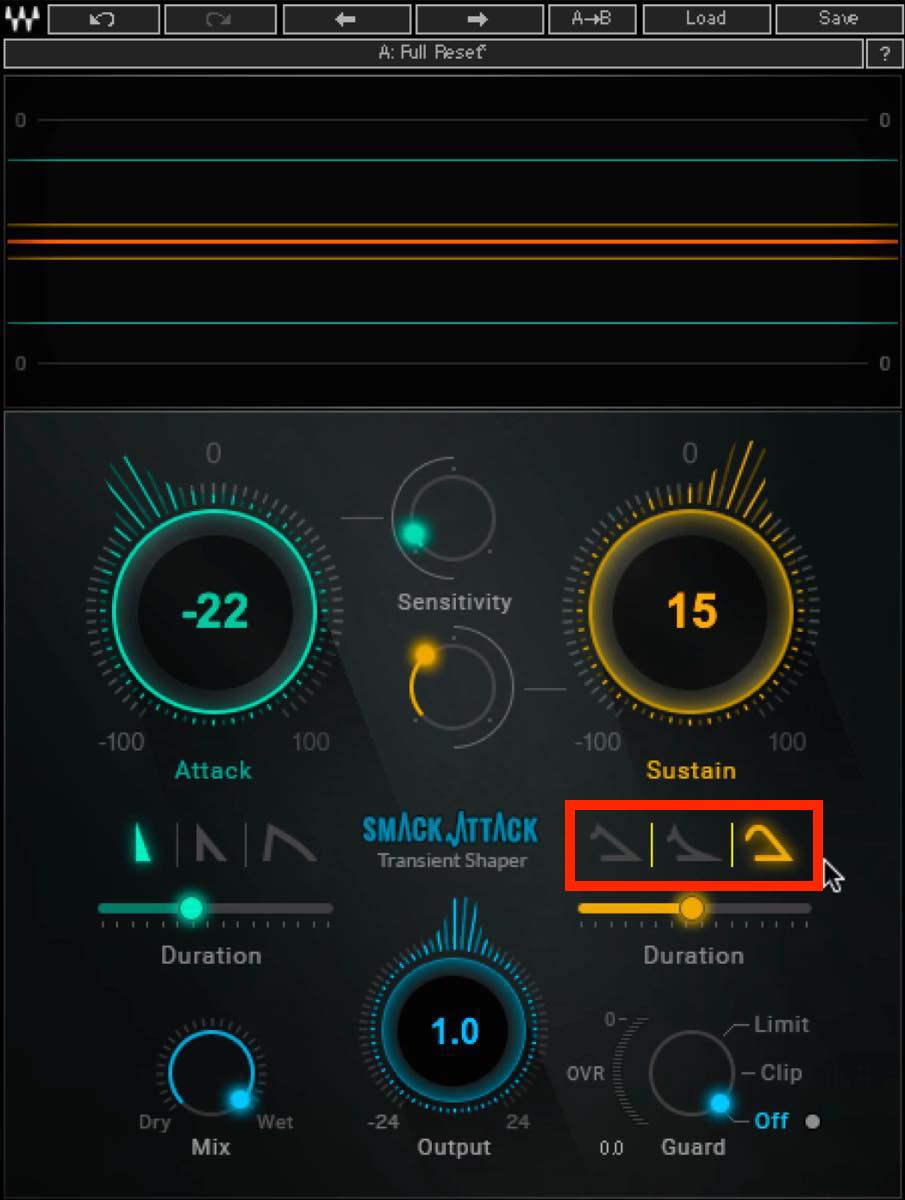 For this case we’ve decided to go with soft linear.

Next we have duration, which determines the amount of time that the sustain is enhanced.
Be aware that if the length is set too long with this parameter, it ends up enhancing mainly the quietest parts of the sustain and makes it difficult to get the correct effect out of it. 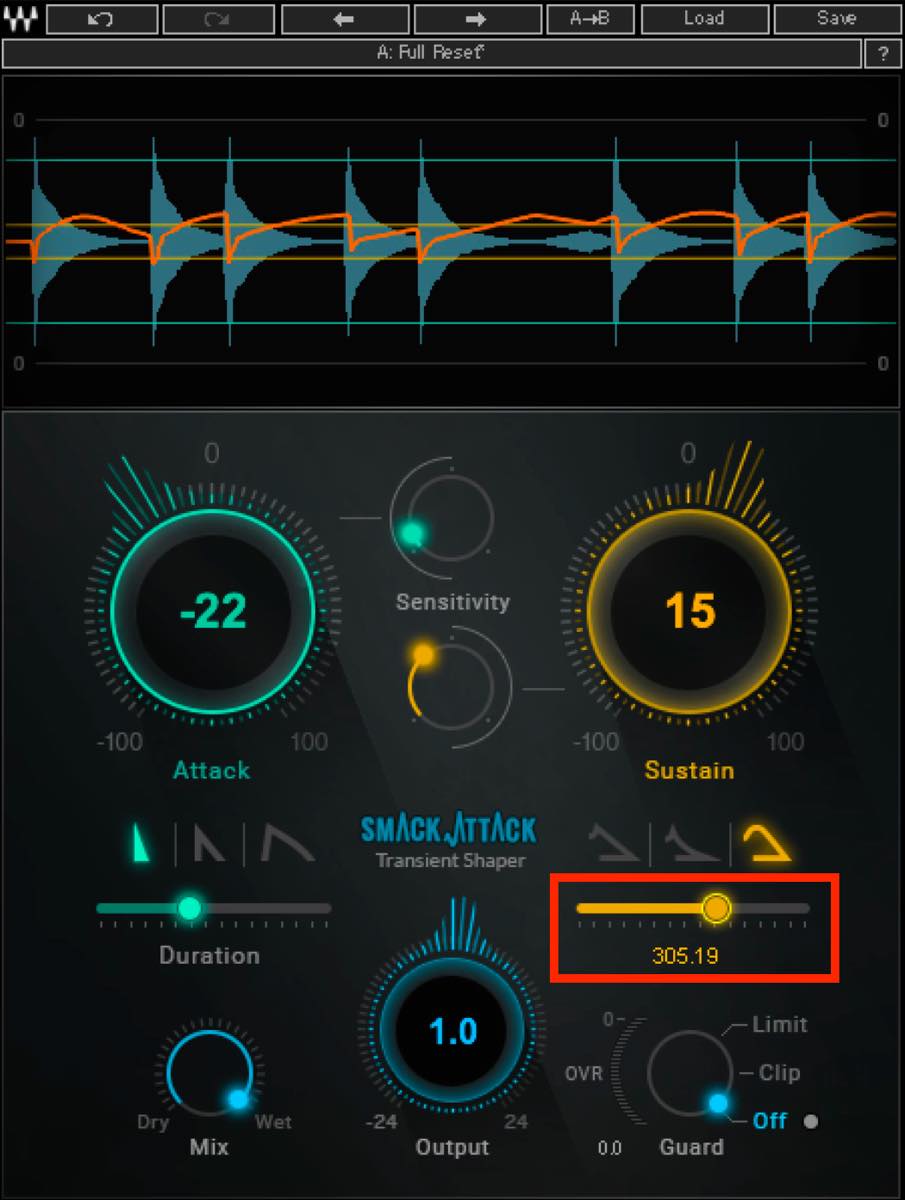 We’ve set the amount a little longer than the center 200 for this example.

Lets compare the sounds before (bypass) and after application.

The power has been tamed and the kick now blends better into the mix.

Blending acoustic guitar into the mix

Though we have taken a look at mainly drum depth, Smack Attack can be used on more instruments than just your drum tracks. For example, we can apply it to the acoustic guitar in this track.
Acoustic guitar is often paired with EQ boosted highs to bring out it’s shimmering quality, but in return this can often over emphasize it’s dynamics and make it hard to blend into a mix.
In most cases you may use a compressor to remedy this, but Smack Attack allows for a faster fix to this problem. 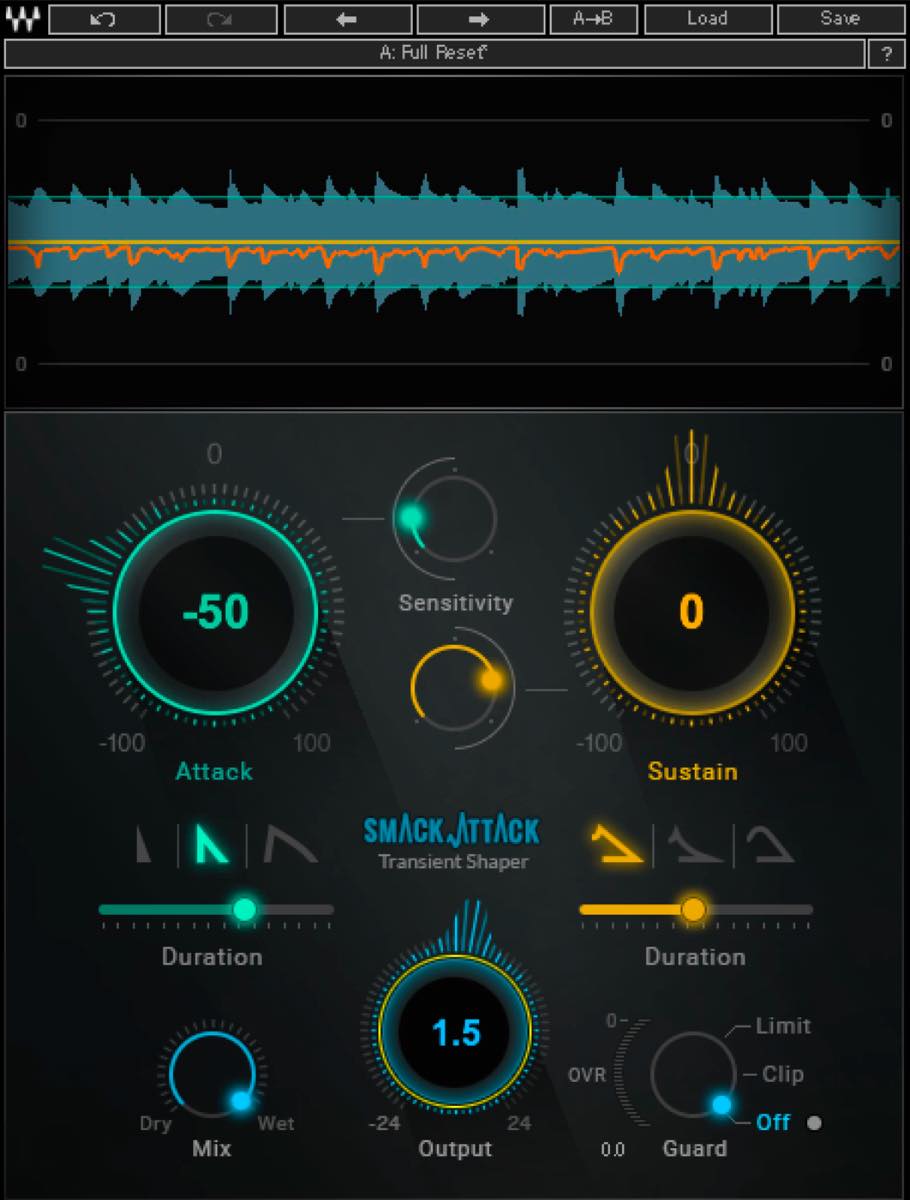 Use Sensitivity to aim for the points in the waveform that stick out, and set the attack reduction a little on the stronger side.
Nail seems to be the best shape to get the optimum effect.
The duration changes how the attack is reduced as well. To get more reduction, we’ll set it slightly longer.
To compare the sounds we have raised the output slightly higher.

When compared to the bypassed signal:

With a more natural effect than compression, the sound is a little further back, and now blends better into the mix. The ability to make these adjustments is also easy and not time consuming.

This completes our TIPS article on using the transient shaper “Smack Attack” to adjust the depth of a track in the mix.
We highly recommend trying this tool out in your own projects!