The Perfect Upgrade from Gold 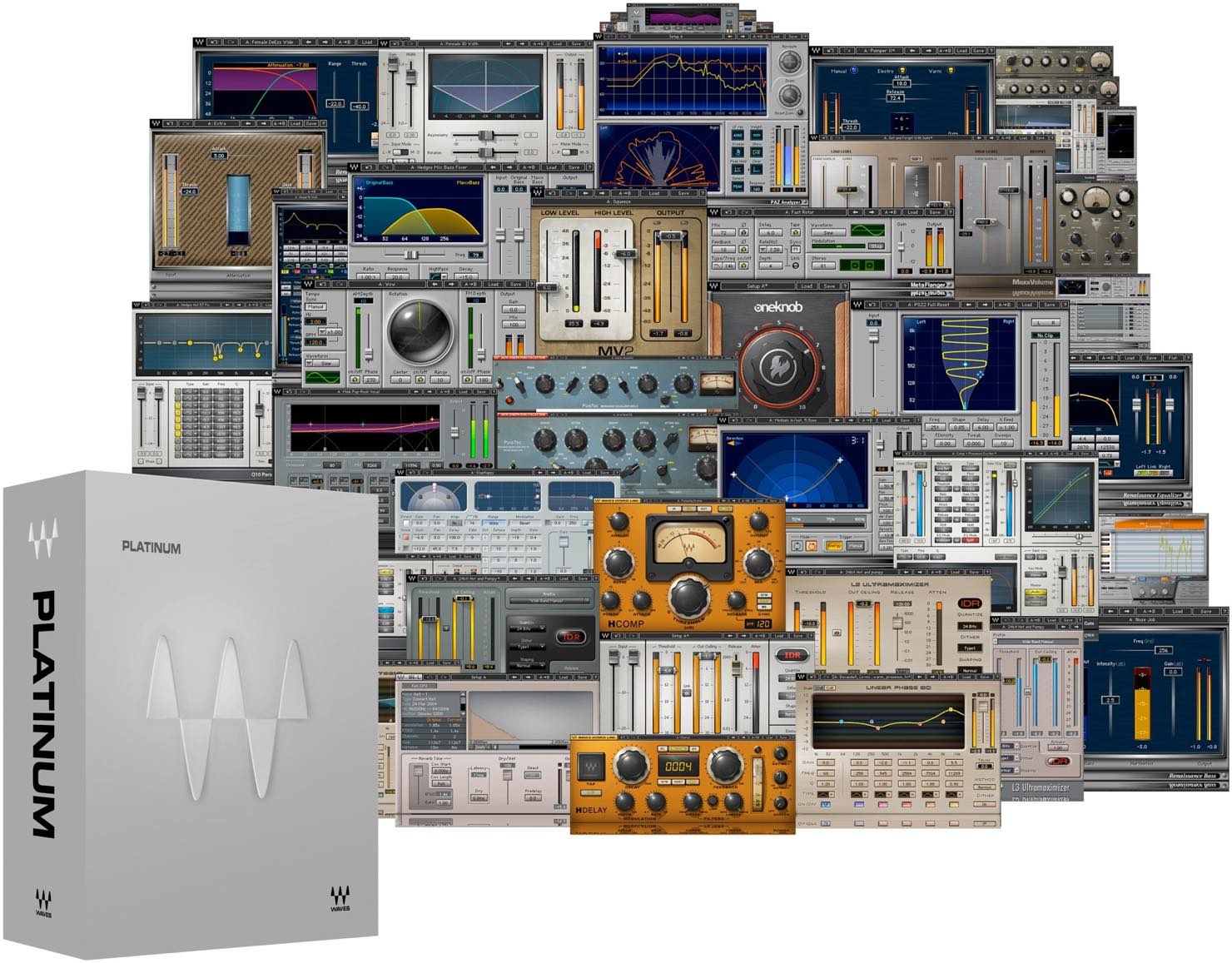 This time we will focus on plugins included in the Platinum bundle from Waves, an upgrade from the Gold bundle in our previous article, and take a look at some mixing Tips.
Though some plugins have been available on the market for years, their usability proves just as powerful to this day.
We will take a look at a number of plugins to look at common ways to use them as well as some new ideas, so stay tuned.

First we will take a look at the vintage EQ included in the Platinum bundle, the Puigtec EQP-1A and MEQ-5.

Known for his work with U2, Lady Gaga, and the Rolling Stone, the engineer Jack Joseph’s immaculate condition Pultec equalizers were faithfully remodelled as these plugins.

Lets try these on a Drum Bus and Guitar Bus.
Before diving in, lets take a brief look at what the knobs do on the EQP-1A.

Lets start by adjusting the low end of the drums using the EQP-1A.

The advantage of the EQP-1A is the ability to simultaenously boost and attenuate low frequencies.
Though you may think boosting/cutting would cancel out if used together, because they apply to slightly different frequencies, you get a unique sound from it.。

Next lets boost the high frequencies.

We will control it using the 3 knobs in the middle. KCS is the frequency, so we will try aiming around 10kHz. The BANDWIDTH works like a Q. Turned left it is sharp, so we will slightly widen it and boost.
It has a smooth and natural sound without being too piercing.

Because the EQP-1A can’t edit mid-range frequencies, lets make use of the MEQ-5 as well.

Peak on the left boosts the mids so we’ll aim for around 700Hz to add some flavor to our snare. This has an incredibly smooth sound as well.

This completes our drum bus editing. Lets hear how it sounds after applying the plugins.

We still have plenty of low end while making it tighter and focused.
Th hihat and snare have more presense to them as well and we have a very dynamic drum sound.

Next we will edit the guitar bus sound. As we will be looking at the mid frequencies, we will be using the MEQ-5 again. Here’s how it sound.

We want a more rock sound and we will try cutting around 500Hz using the DIP section.
We will also boost around 1.5kHz using Peak on the right. Last, we will use Peak on the left to boost around 200Hz. This has a very smooth sound as well.
Lets hear how it sounds.

The lows that may have clashed with the bass have cleared up considerably.
The boosts helped give definition to the sound and gives it a heavy rock sort of weight.
The sound feels almost wider as well.

Next lets take a look at the Renaissance Vox. 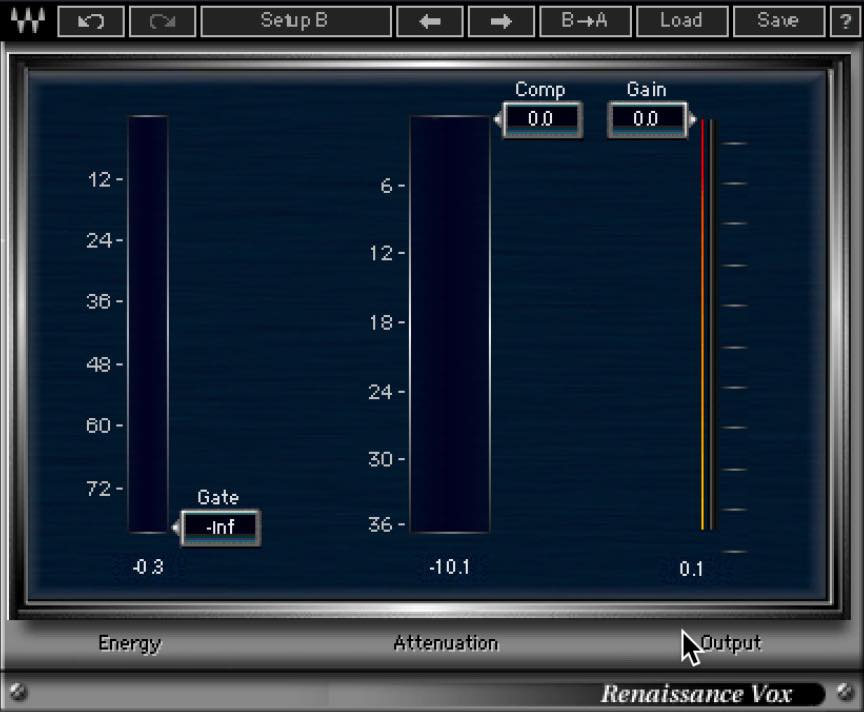 This is a compressor/gate that is optimized for vocals. It is popular for it’s incredible ease of use. The compression and gate are controlled with just 1 fader, and all thats left to do is adjust the gain.

Lets go right into applying Renaissance Vox to our vocal.
This is the sound that will be effected. We will go ahead and adjust it with the mix. 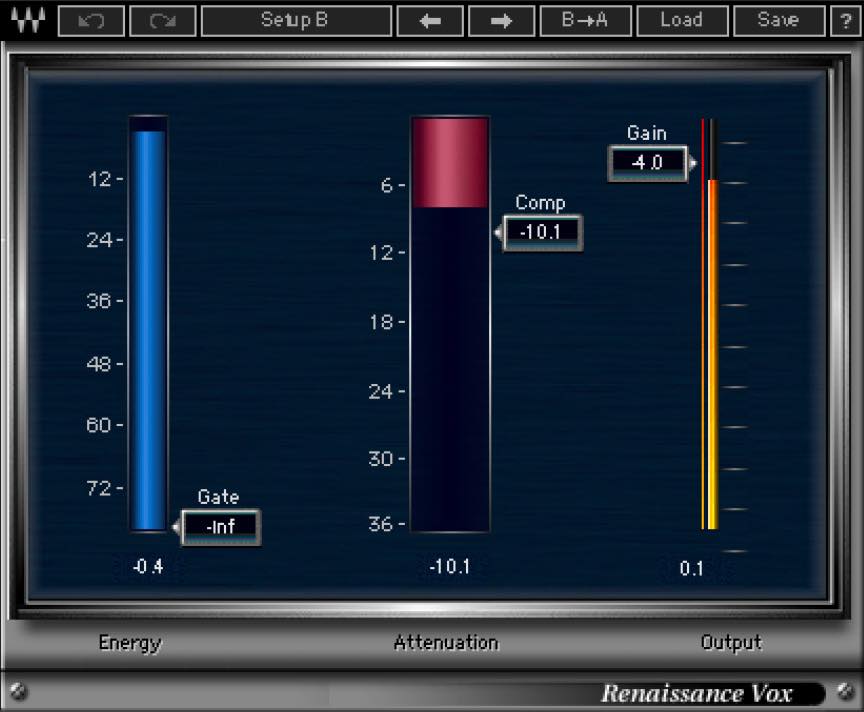 As the Comp fader is lowered, the volume increases in conjunction to the sound compression.
We will lower the Gain to adjust accordingly.
Just this adjustment alone has evened out the dynamics quite a bit. It applies a very clean and natural compression.
Lets hear how it sounds.

The groove is kept and the attack is still intact. In addition, the quieter parts have been evened out making everything easier to hear.

The Renaissance Vox can be used on various instrument sounds as well. For example, bass.
Lets try applying it to the bass DI track to add some sustain to the sound.
This is the bass sound. 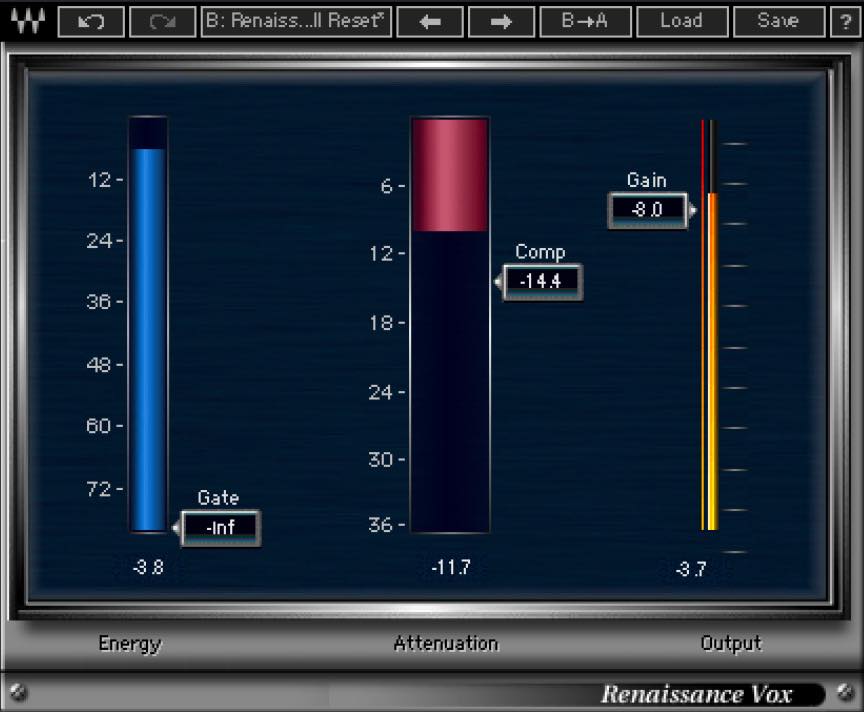 Like when adjusting the vocal, we will lower the fader until we can clearly hear the dynamics in the sound. Lets hear how it sounds.

The difference in sustain after the attack can be heard clearly. We can clearly hear and feel the harmonic vibrations of each note that is played.

Because the Renaissance Vox applies for simple compression, it also allows you to focus on sound design.
Though you may need a different compressor to make detailed edits on transients, if you want to even out recorded sounds this plugin provides plenty of usability. This is also a great tool to get that last bit of push after editing the sound.

Lets try adding another touch to the bass. Next we will take a look at Renaissance Bass. 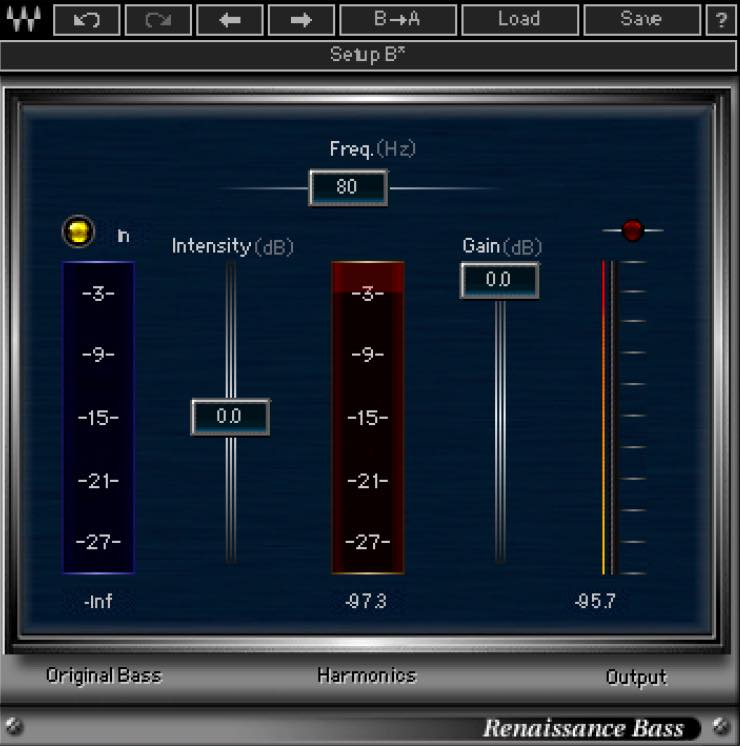 Renaissance Bass creates harmonics from low end frequencies to quickly allow you to enhance your bass. Because it works theorhetically different to an EQ, it is a sound that is hard to emulate with any other plugin.

This time we will be applying it to the bass Amp track. This is how it sounds.

Renaissance Bass is very easy to use. Match your frequency, and intensity determines how strongly it is applied.
To make it easier to use, start with the Intensity lowered all the way down, and gradually raise it up. In most cases, a small amount goes a long way.
The default of 80Hz usually works great on bass. Listen to the audio while gradually adjusting the Intensity. 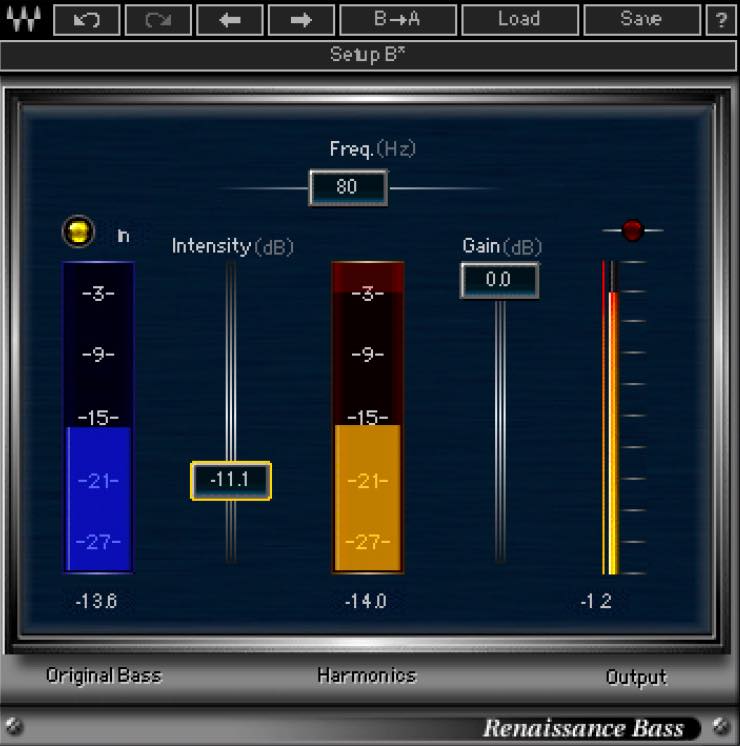 Lets listen to the result.

The bass is a little more subtle and provides steady support to the track.
I personally find the Renaissance Bass plugin to be a quintissential bass plugin. I use it very often on bass and kick tracks.

Next we have the famous L series limiter/maximizers. 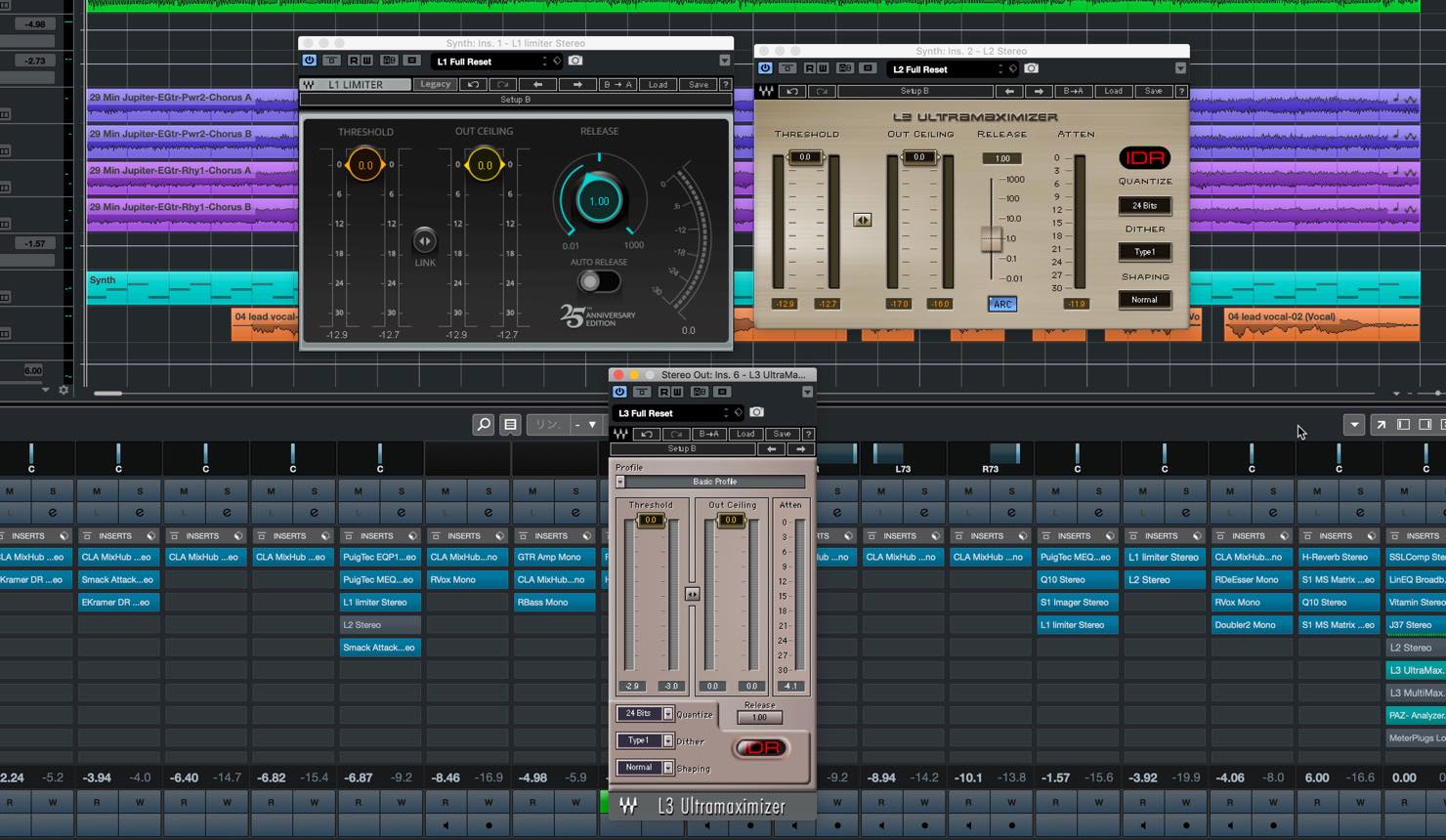 Though L1 is included in the Gold bundle, Platinum also contains the L2 and L3 ultramaximizer.
We will be looking at using the L1 and L2 on single tracks rather than the master, and see how to use them in seperate situations.

We will be applying it to the synth track. This is how it sounds.

There are some levels that jump around so we will use the limiter to even it out.
We will apply the L1 and L2 with the same threshold and out ceiling rations to hear the difference in sound between the two.

We will set the attenuation to be around -6 to -10dB using the threshold, and adjust the out ceiling to ensure that the effected sound isn’t much louder than the original.

The L1 has a bit more saturation and a sort of “pumping” effect to the sound. The L2 keeps the sound very clean and organized.
The L2 seems to work better in this situation. The L1 has a more saturated sound.

Though the L1 has a more saturated sound, this can be used as an advantage.This is true particularly on drums.
Using the L1 as an alternative to a bus comp for drums would work great.

We will aim to have around -6dB of attenuation by lowering the threshold, and lower the out ceiling to avoid drastic changes in level.
Lets compare the L1 and the L2.

The L1 helps bring out the attack of the kick. The highs of the snare are more prominant as well. However, the L2’s sound remains clean.
Though what you use will depend on the track and your preference, the L1 proves to be a valuable tool to help color your sound as well.

Last we have the L3. 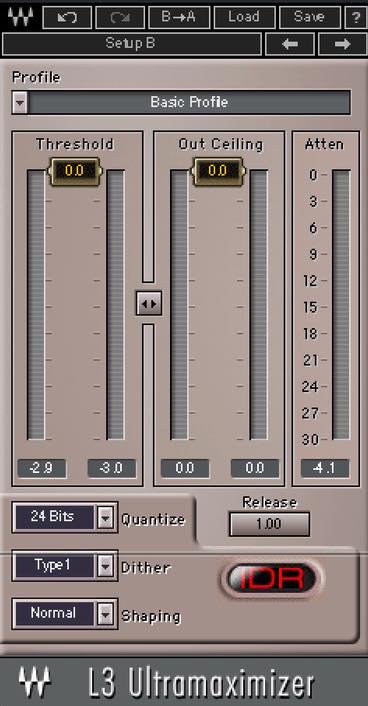 The L3 Ultramaximizer has a multiband limiter built into it, allowing for natural increase in loudness, as well as sound design and coloring from profile.

We will apply it on the master track, and compare it to the L2. 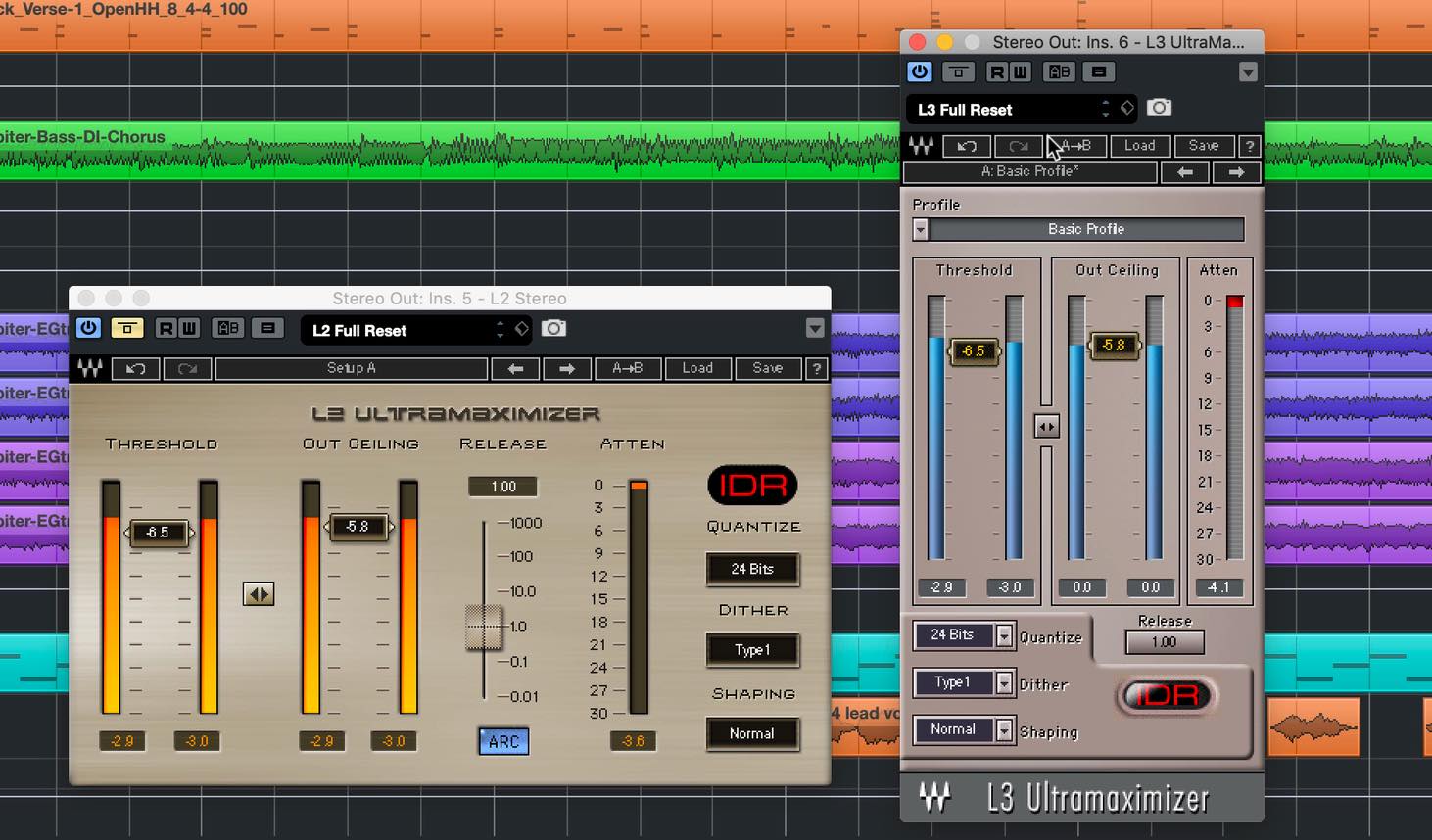 We will keep the settings the same for both plugins with the threshold adjusted to attenuate -1 to -3dB. To be able to compare it with the bypassed sound, the out ceiling is purposely lowered accordingly.

Though the L2 is clear, the low end is a little too bloated.
The L3 on the other hand keeps the kick attack and snare highs clear, without the saturation of the L1.

I believe that the coloring of sound in the L3 is done through an internal multiband processing and is a great parameter to take advantage of.
The overall style of coloring can be adjusting using Profile found on the L3 plugin.
In addition, what we have heard until this point is the basic profile setting. 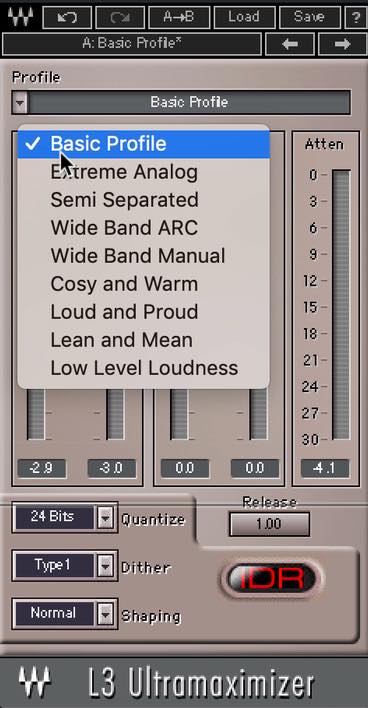 For example, if looking for a clear sound with little coloring, Cozy and Warm would work. It has a similar effect to the L2 without the bloated lows.

However, Loud and Proud may suit this genre better. Though it has a great rock sound, it has plenty of range while still providing loudness.

The L3 works beyond the realm of a normal maximizer, and has an effect type capability that adds some flavor to the final stages of a song.

We hope you enjoyed this article.
The platinum bundle contains a myriad of highly functional plugins.
After using the Gold bundle to the fullest, if you are looking for an upgrade, we highly recommend this bundle.
If you already have this bundle, try out these tips in your next mix/song!