Getting the Most Out of This Popular Bundle 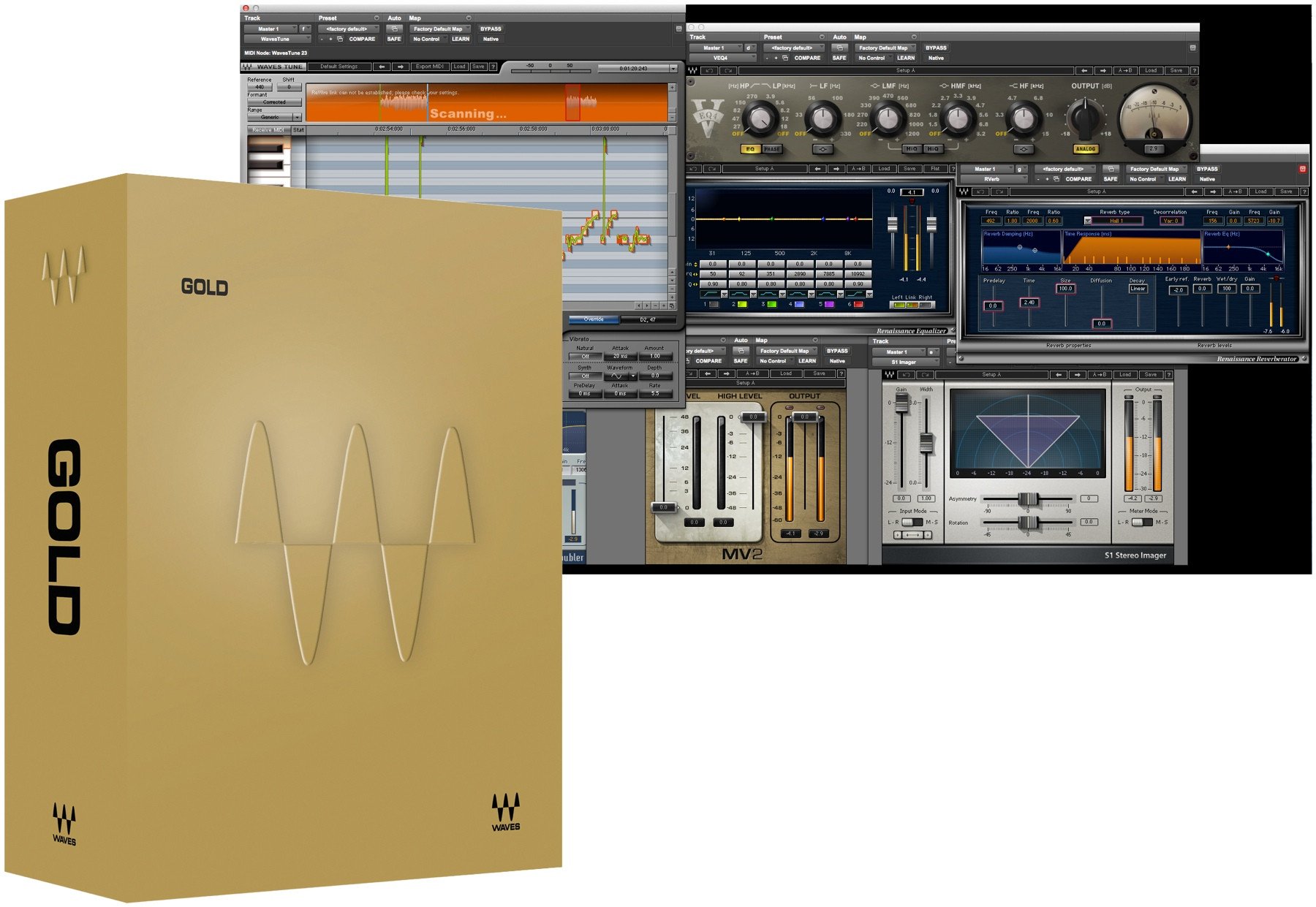 In this article we will be taking a look at some mixing tips using plugins included in the highly popular Waves Gold bundle.

We will look at unique ways to use specific plugins and new ways to utilize them that may help expand on your mixing practices so stay tuned! 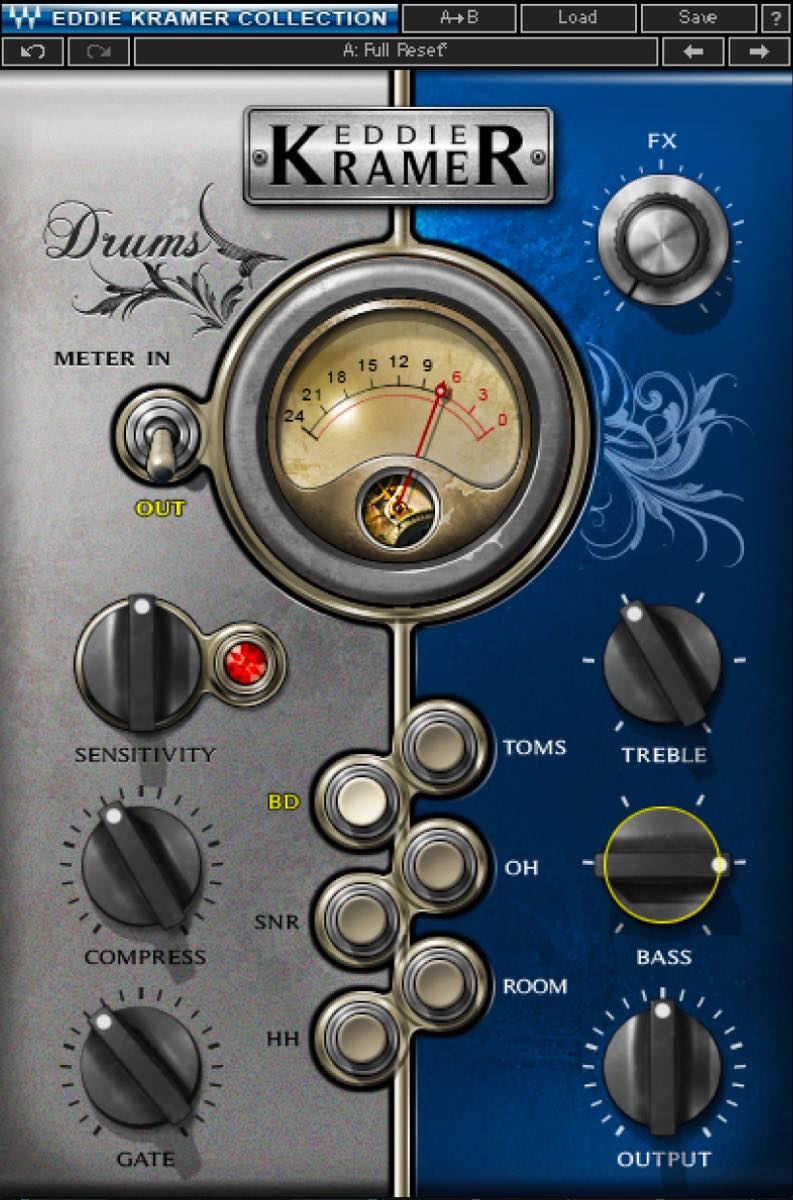 From The Beatles, Jimi Hendrix, Led Zeppelin and more, the famous engineer Eddie Kramer helped direct the creation of this plugin, and it allows you to easily capture the essence of his sound.

This plugin is incredibly easy to use and some simple tweaking will get you some fantastic tones out of it. 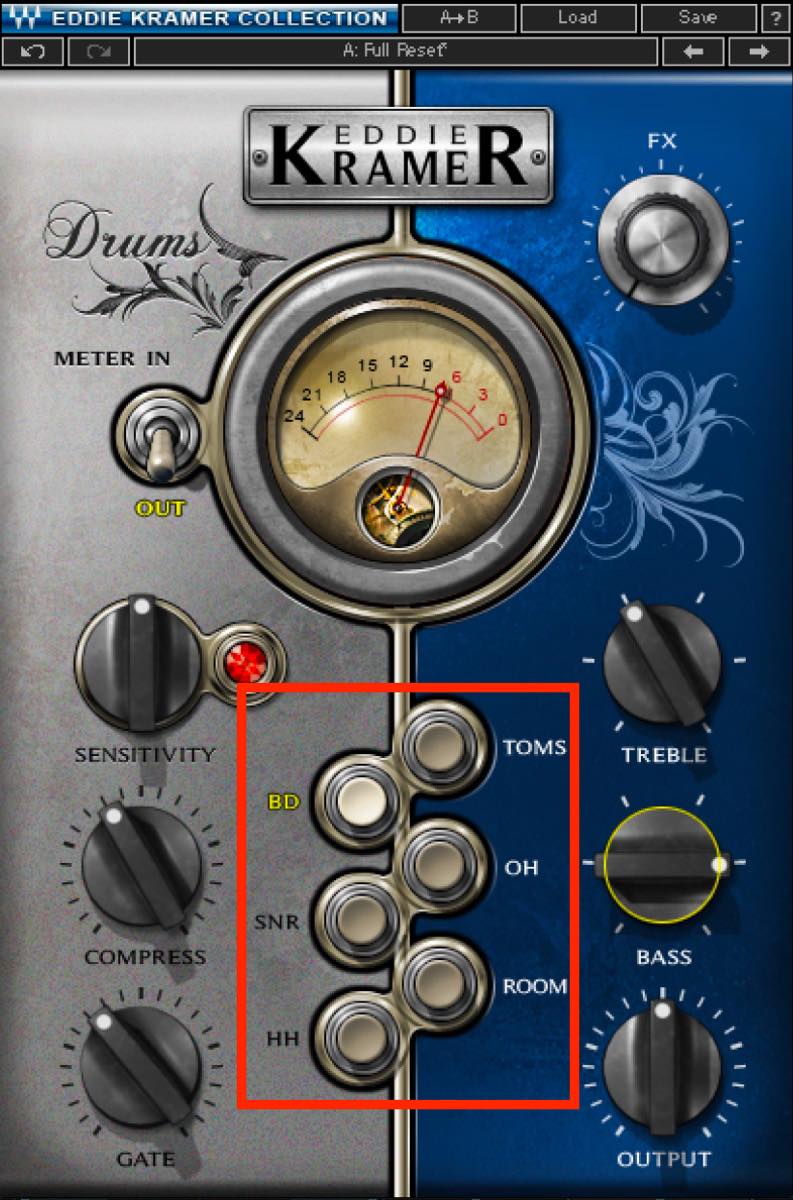 Simply make some EQ adjustments if you wish. Lets compare the sound before/after the effect is applied.
(Applied to the snare and kick)

The huge advantage of this plugin is how quickly you can work with it.If this plugin has the kind of sounds you are after, you can easily create your ideal tones. The sounds are incredibly versatile too. We recommend keeping it as final bit of “spice” to add at the end of your drum plugin line-up.

Next we will take a look at the MV2. 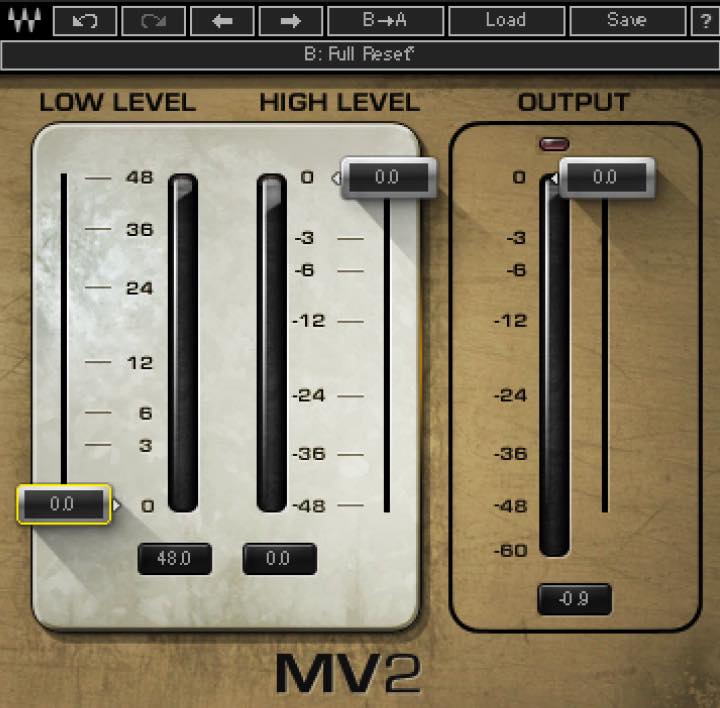 This is a dynamics related plugin, but unlike a compressor which only squashes down loud sounds, this plugin helps boost low level sounds as well.
If you want to keep the original sounds nuance while maintaining even volume levels, and bring up sounds that might get lost in the mix,
this plugin can be used as an incredible tool.

For this tutorial lets apply it to the guitar track.

The muted notes in-between sound a little quiet, but these are important sounds in emphasizing groove.

Lets raise the Low Level slider to raise the low level sounds.
It seems the ratio changes according to the level, so lets try raising this slider by a lot and lower the output instead. 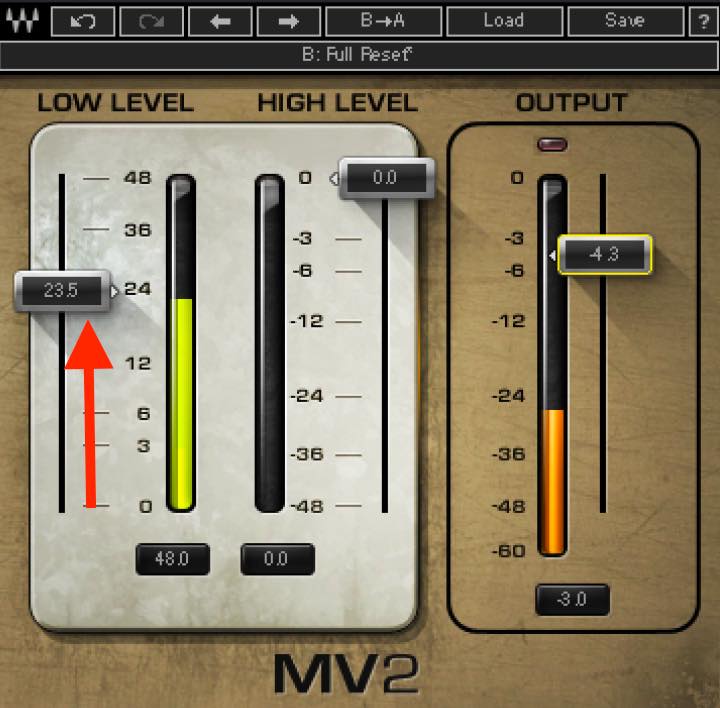 The muted notes clearly become much louder. The other parts are enhanced as well, leading to a more upfront sound.

Next we have the Renaissance AXX. 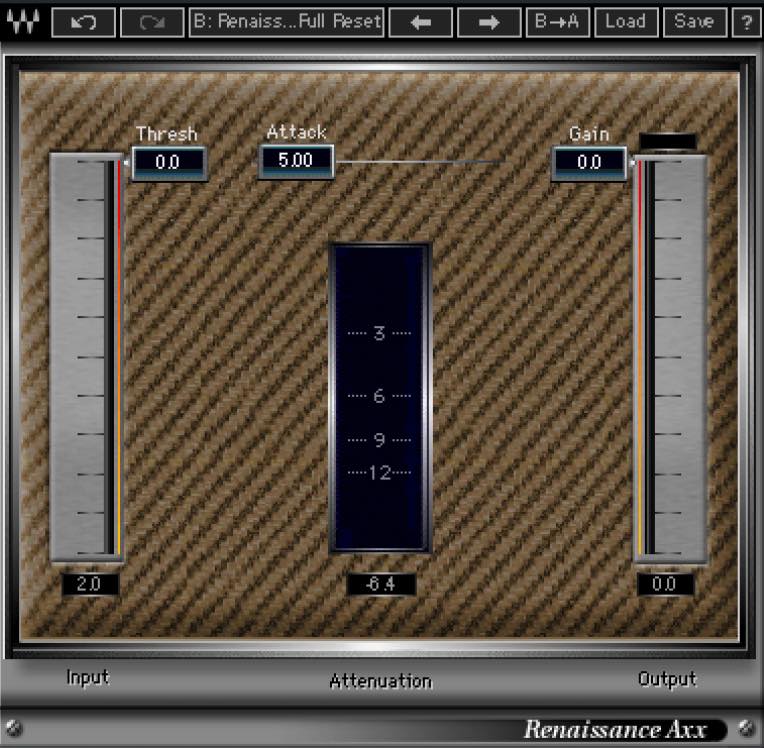 This compressor is tailored especially for guitar/bass and compared to other comps, it allows you to quickly and easily get amazing results.
Lets try applying it to the arpeggiated guitar track.

Lets try to even out the attack and add a little more sustain to the sound.
Though we want to lower the threshold and begin applying compression, this threshold works similar to a maximizer and the gain is increased as it is lowered.
If you don’t want to change the overall volume, hold the shift key to select both Thresh and Gain to lower both parameters simultaneously. 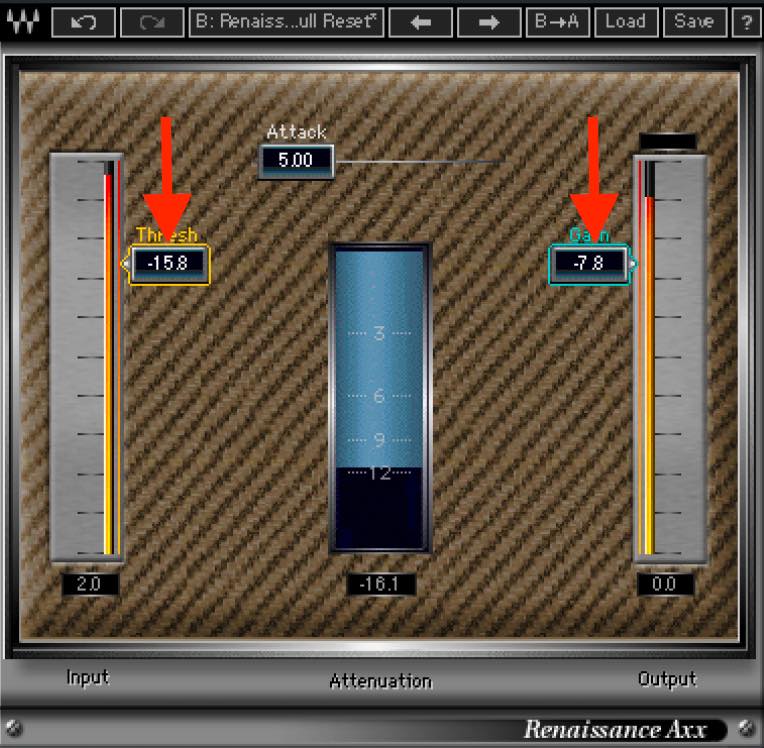 It allows you to easily even out the levels without getting that overly squashed comp sound.
Last, just adjust the Attack to get your desired nuance. When set fast you get a softer touch, and the slower it’s set, the more the picking sound comes through.

The sound blends nicely into the mix, now with better sustain.
We highly recommend this plugin for quick and easy edits to your guitar and bass sounds.

Next we have Vitamin. 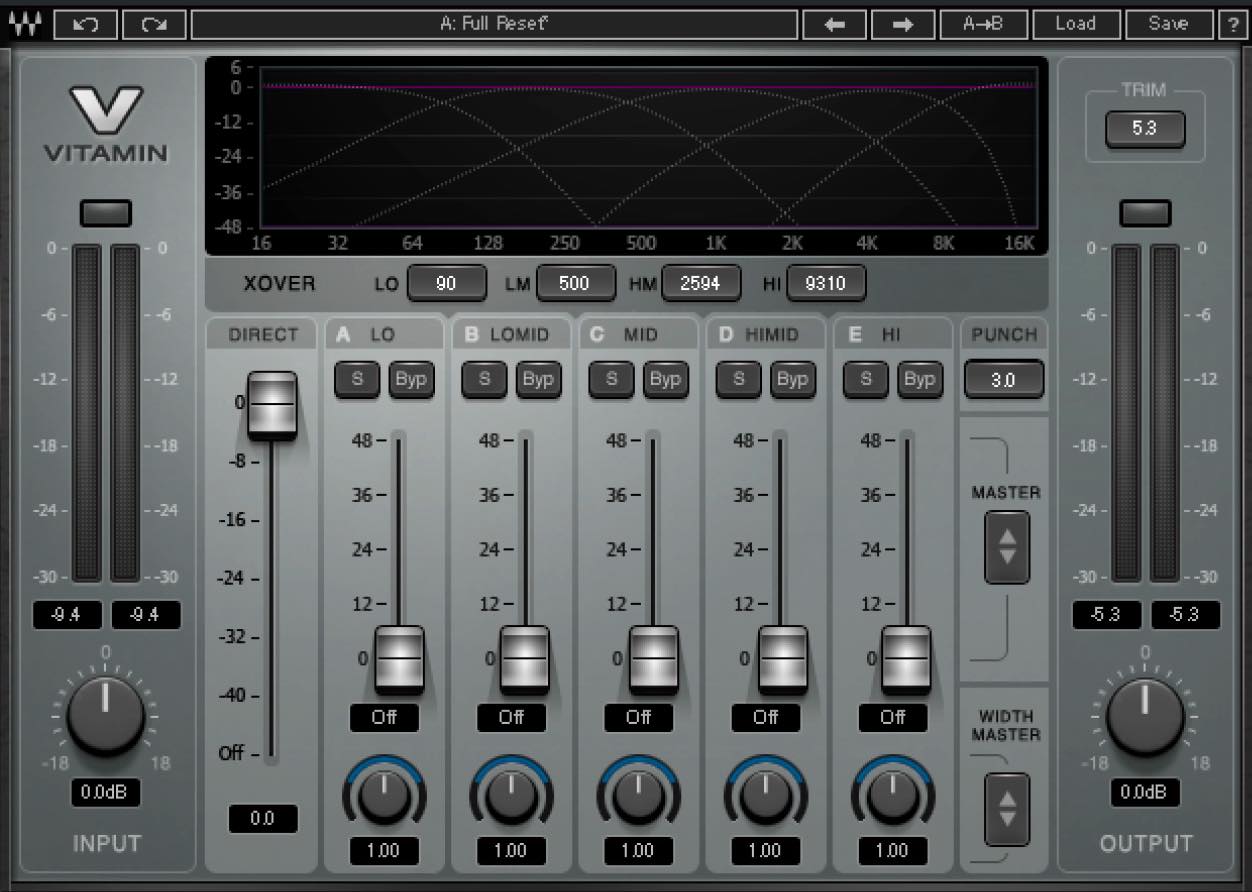 It is a multiband harmonic enhancer that allows you to control the harmonics of different frequency bands, but for this tutorial, we’ll be using it in a slightly unusual way.
This is the sound we will be applying it to.

Though we are looking to have this guitar take up the higher frequencies in the mix, no matter how high the guitar is played, its hard to get harmonics over 5kHz making it easy to get lost in the mix.
To remedy this, we will utilize vitamin to get sounds that would not be possible to play on a guitar.

First we will lower the direct slider down all the way. Since no frequencies are being enhanced, there will be no sound playing at this point.
By raising different frequency bands, we will create a sound using just the harmonic content. 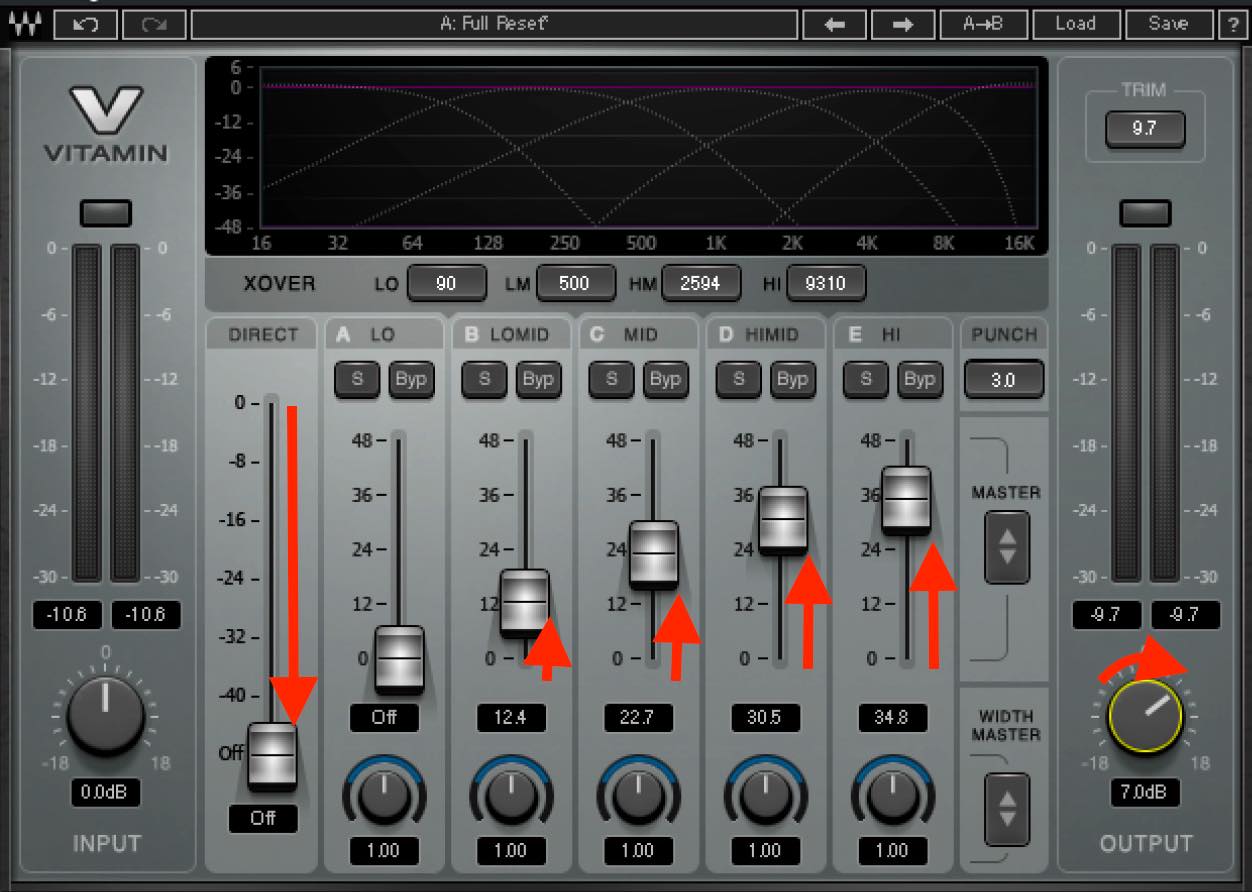 Since we’re looking for high frequencies, lets raise this slider first. We will raise the other bands to fill in this sound. Since mid frequencies get muddy, lets keep this slider on the lower side.
We’ve raised the output to make up for the lost volume.

It’s almost as if we introduced an entirely different instrument to the song. Using this plugin you can really create some unique sounds.
Vitamin allows you to even come up with new ways to design sound with its versatility.

Next we have the H-Comp. 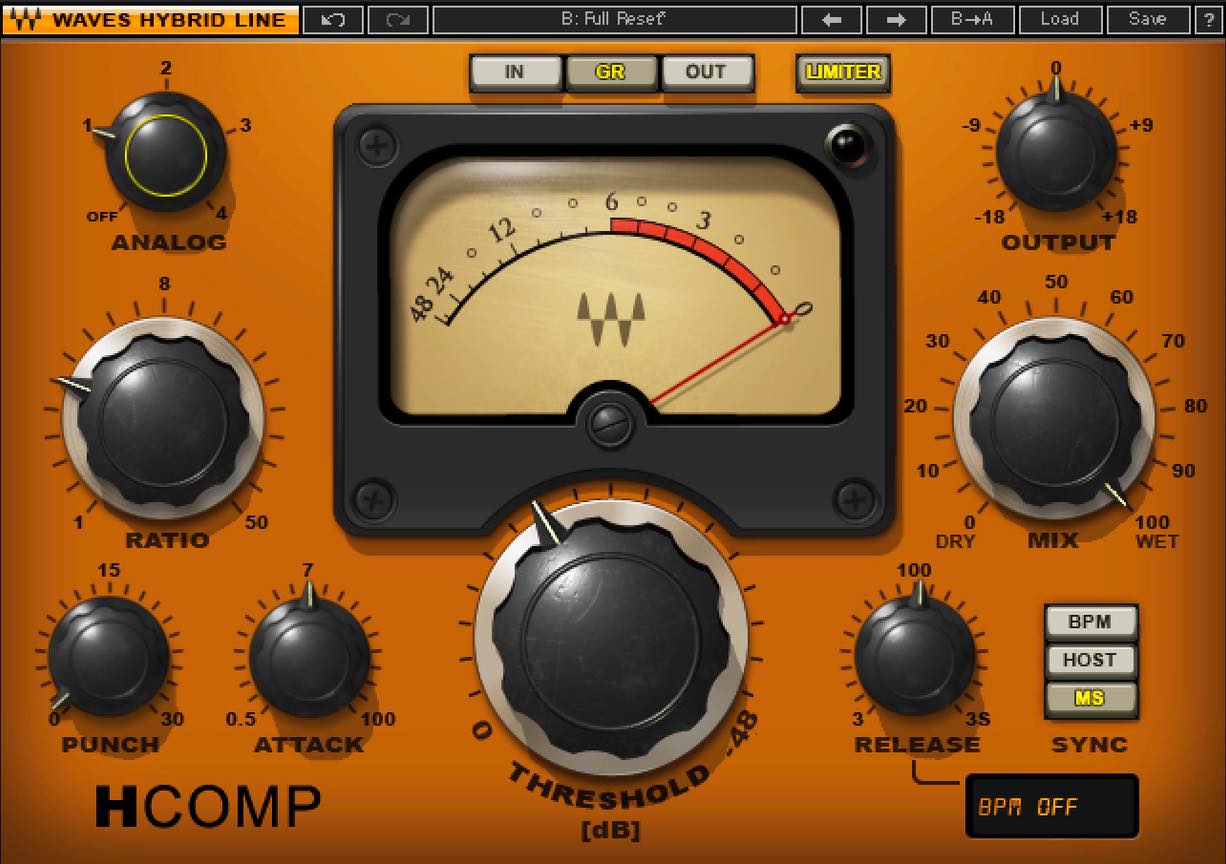 Like the R-Comp, it is an incredibly popular compressor from Waves, and the MIX knob particularly stands out in this plugin. This knob allows you to utilize parallel compression in 1 track using just this plugin.
We will apply it to the electric piano.

As a matter of fact, the sound that you just heard is included in the Gold bundle, as the Electric Grand 80 Piano.
We want to apply the H-comp to start designing out sound, but regular settings may not lead to the sound we’re looking for. For this situation, we’ll try out some parallel compression.

First set the ratio high, and set the attack and release on the fast side and set the gain reduction so that plenty of compression is applied. The key is to apply a little bit too much compression.
Spin the MIX knob all the way left, and start from a Dry signal before blending in the sound. We’ll slowly blend in the compressed sound.
Last, raise the output to make up for the reduced gain. 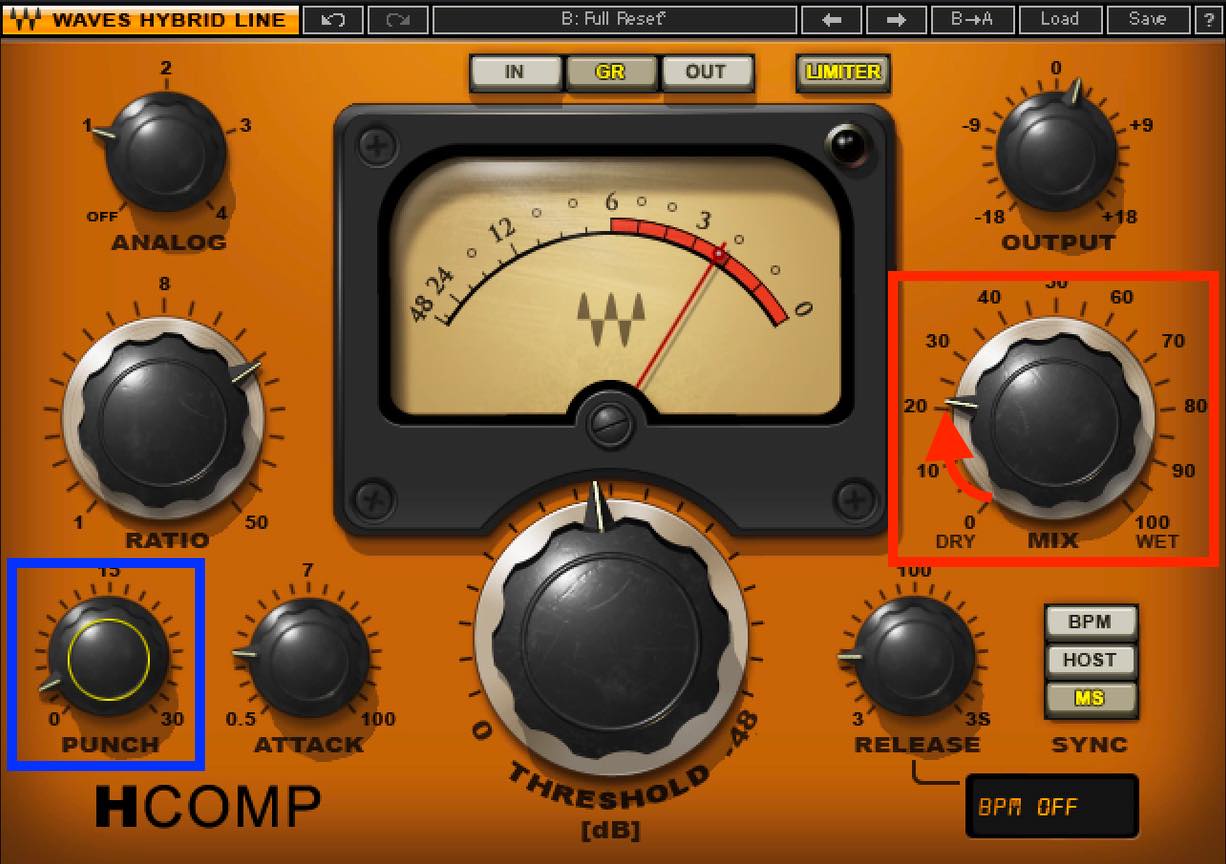 This Punch knob is another special feature of the H-Comp. A simple adjustment gets you a more powerful attack than when your attack is set fast, and gives you that punchy “heavily compressed vintage compressor” sound.

This is the final sound after applying the effect.

Next we will take a look at the S1 MS Matrix and the Q10 Equalizer.

We will place the S1 MS Matrix in an order like shown here, and utilize 2 instances of the plugin. 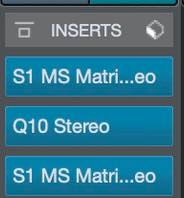 We will turn the L/R stereo signal to M/S, edit it within the plugin, and change it back to L/R.
In the signal between the 2 MS Matrix, L will become Mid and R will become Side, and by editing the middle plugin, you can make edits using mid-side processing.
We will be utilizing Q10 which allows us to remove the link and edit L/R (M/S) individually.
To celebrate their 25th anniversary, the Q10 eq has evolved both in style and function as well. Proportional Q filters have been added that keep Q value proportional to gain, as well as selectable band control, and Double Precision control allowing you to choose between 32-bit and double-precision 64-bit processing.

Lets try editing our sound in M/S. We will be applying it to a bus track that contains all sounds other than the drum/bass/melody.
In addition, become MS Matrix will reduce the track by -6dB, we will set the bus fader at +6dB.

First we will add a low-cut to the side signal. Switch to the R channel (currently side), select a high-pass for band 1, and cut to around 160Hz. Pay attention to the kick/bass and the tightness of the mix when editing this parameter. 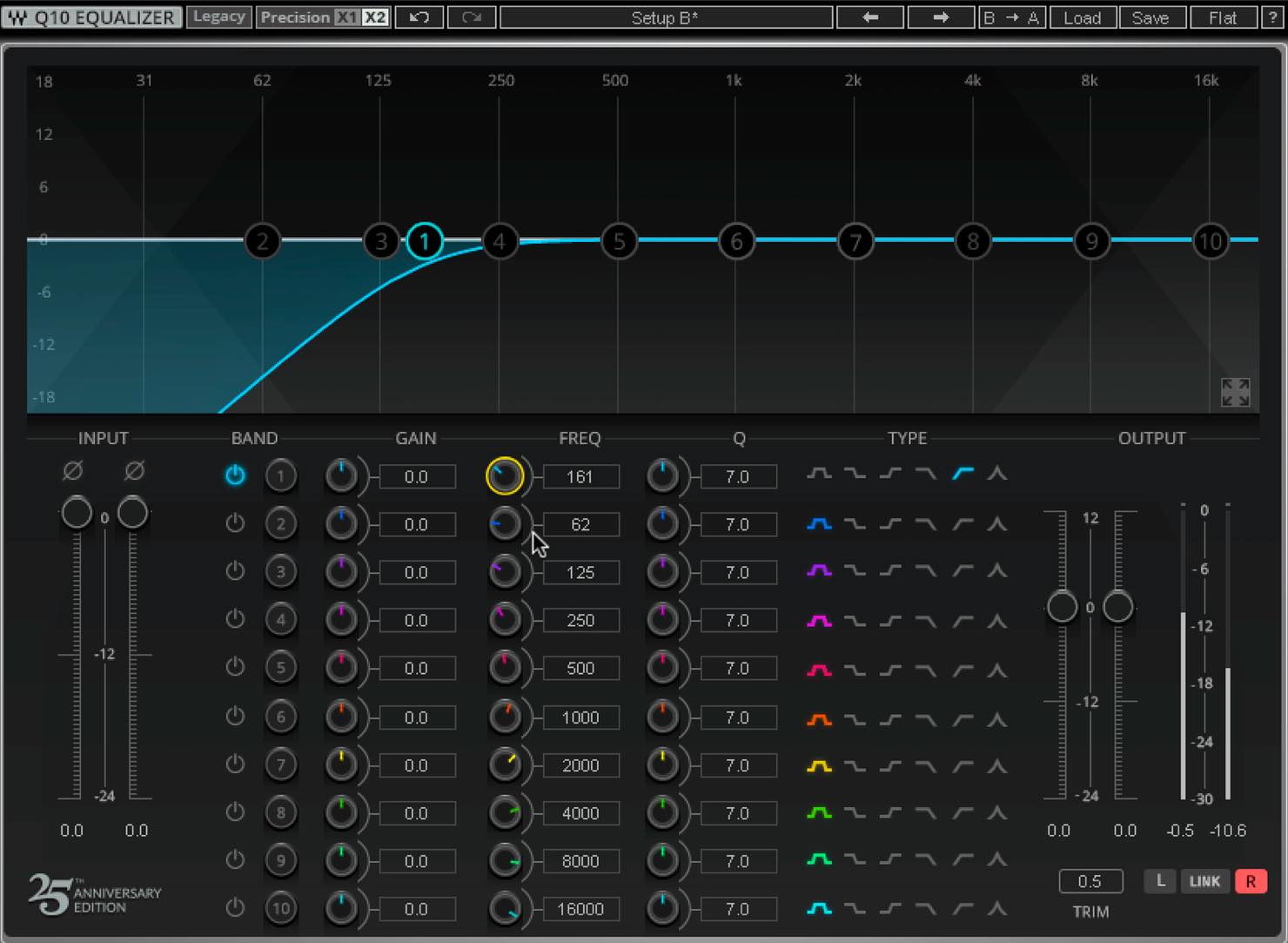 Next we will switch to the L channel (mid signal), and cut around the 1.6kHz frequency range. We’re doing this to help open up space in the mix for the melody. Focus on the clarity of the melody while editing this parameter. 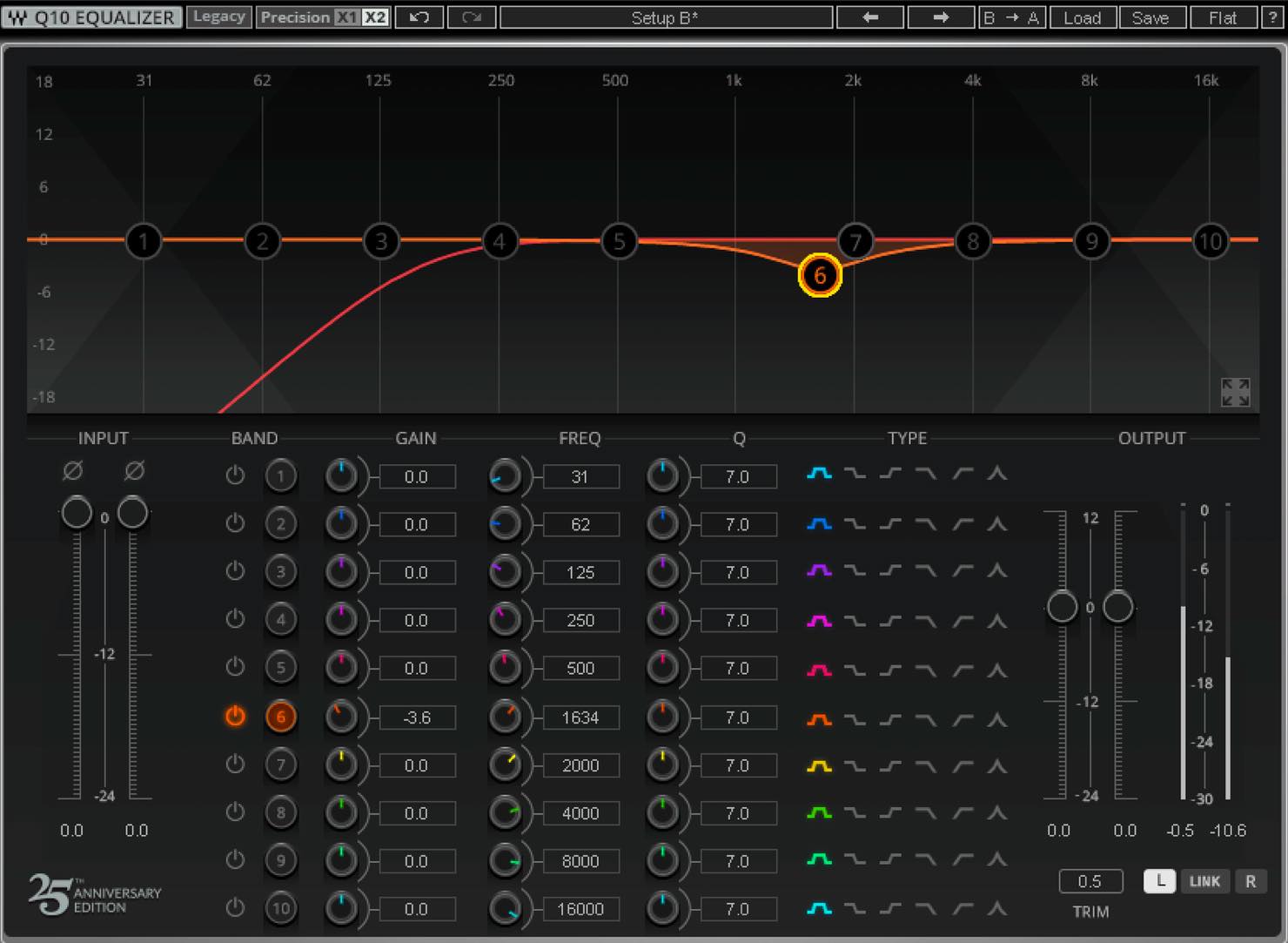 Making similar edits to the reverb track is another great way to utilize these plugins. We have added a low cut to both the M/S signals, and cut around 1.6kHz for just the mid. 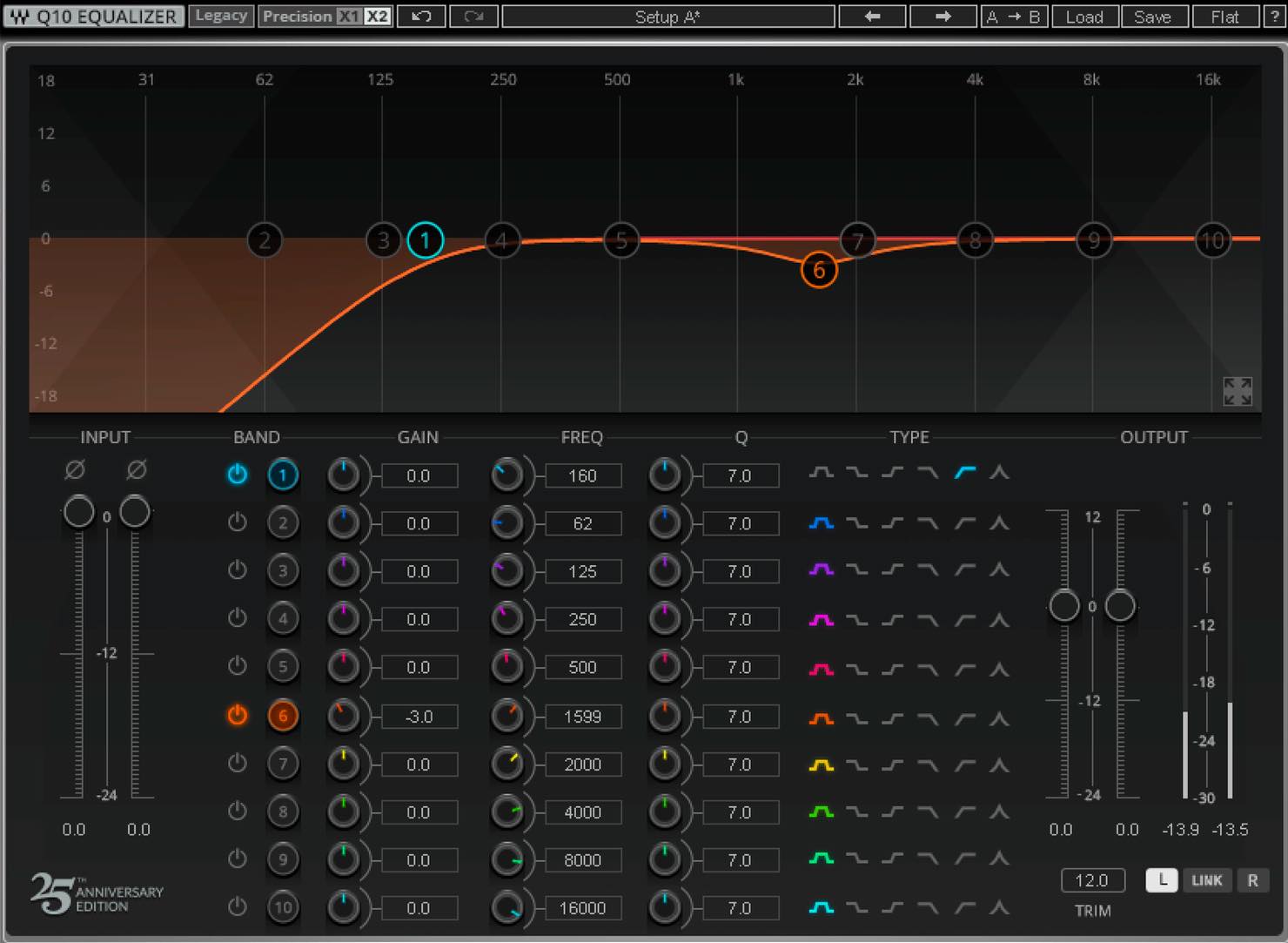 Lets compare the sounds before and after applying these plugins.

The low end is cleaner and tighter, and the melody line is much clearer in the mix.
As seen, M/S processing can be used not only in mastering, but on bus tracks and reverb to make detailed edits to the stereo image and add clarity to your sounds.

Last but not least, lets look at 1 more way to utilize Vitamin.
In addition to enhancer functions, Vitamin contains multi-band stereo width controls.
We will apply vitamin to our master track to narrow down our low-end sounds. 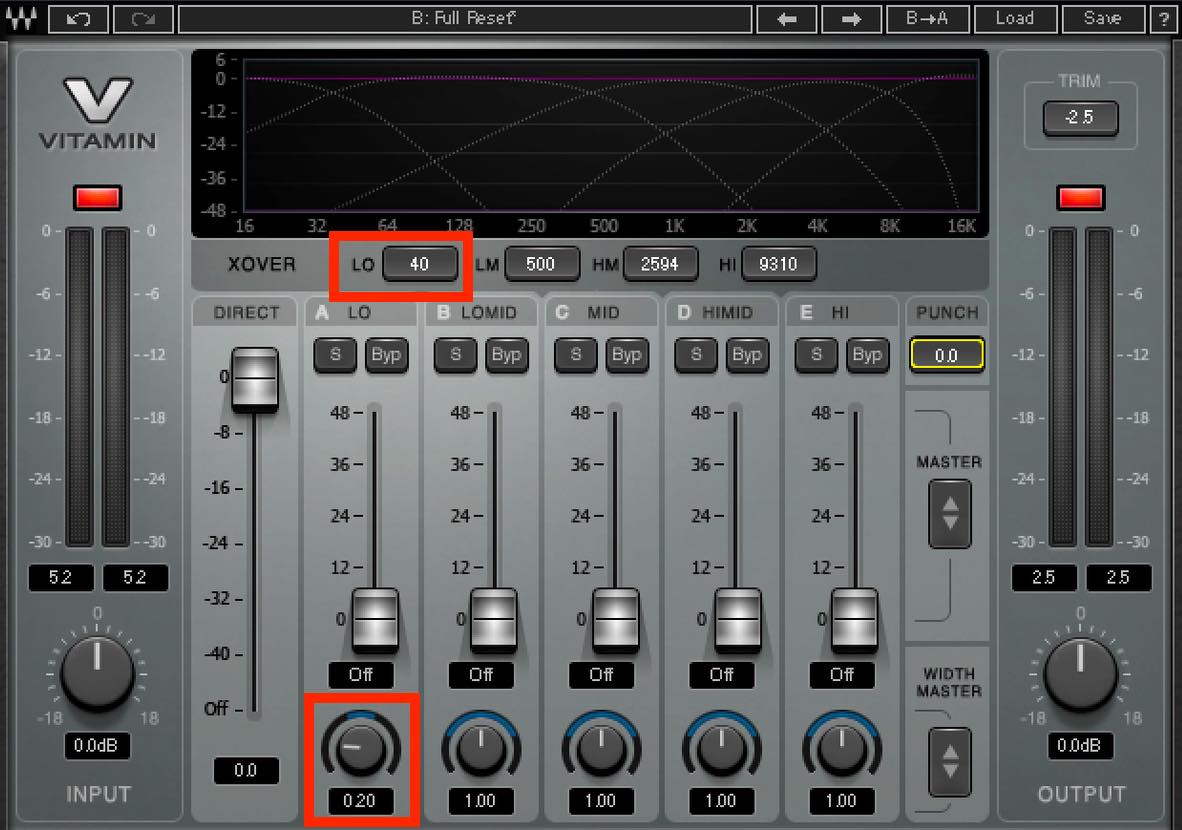 With the LO crossover to around 40Hz, turn the stereo width of LO to the left to make the sound closer to mono.
Depending on the genre, you can make this frequency complete mono, but for this track we will set it at around 0.2.
In addition, we will not be utilizing the PUNCH parameter which applies to transient sounds, so we’ve set it to 0.

Lets compare the sounds before and after adding the plugin.

The low end has tightened up even more, and it feels like the kick/bass are even heavier. The low-mid frequencies have cleaned up as well, making a mix that feels much cleaner.
Though Vitamin is an incredibly versatile plugin, it works great for small and detailed edits as well.
It doesn’t use up much CPU so try it out in various situations in your next production!

The Gold bundle proves to be an essential plugin set, and many of the plugins can be used not only for their original functions, but in new and creative ways.
We highly recommend that you come up with your own ways of using these plugins to improve your mixes!