All data is kept in the HDD

The hard disk drive stores data sort of like a tool chest.
It is also referred to as an “HDD.” 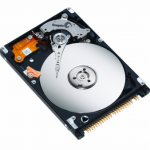 It is measured similar to memory using “GB” or gigabyte.
500GB is one way you might see it displayed.

There are even many 2TB (2000GB) drives available.

The CPU and memory influence how fast the computer will run,
while the hard disk stores all of the data on the computer.

This includes your iTunes library, pictures, or Computer Music projects.

The bigger the hard disk, the more you can store on your computer.

What happens when the hard disk runs out of space? 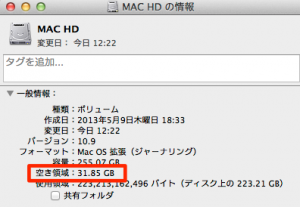 Because everything on a laptop is based on data
and data will be unable to save, your computer will cease to function properly.

This ultimately defeats the purpose of having a computer!

This is another analogy that you are free to breeze over,
but memory is used to take data (tools) out of the hard disk (tool chest),
and place them on your workspace.

Rather than hunting for what you are looking for in the tool chest,
you can access what is in your workspace, and speed up your work process.

That is the reason it is measured in the same “GB” as the memory is.

That is all for our odd comparisons!

With that all being said, how much storage space should you have for Computer Music?

How much storage to have for Computer Music

Considering the fact that the hard disk contains all data on the computer (not just for music), we suggest a bare minimum of 250GB for a computer being used primarily for Computer Music.

If you are planning to add a variety of high quality audio samples, we suggest having over 1TB (1000GB) of storage.

Even if your computer doesn’t contain much storage space from the get go,
you can utilize external hard drives,
and have extra storage space depending on your needs.

There is also a type of hard disk called an “SSD.”。

How is it different?

It lies in its performance speed.

After experience work on an SSD, it is almost impossible to go back to a HDD.
Because of this, it is also considerably more expensive for the price.

Though theres no need to break the bank,
if speed is a priority, we highly recommend getting an SSD.

This concludes our articles on choosing a laptop for Computer Music.
If your computer passes all of these marks, we believe it will operate smoothly!