「Raising the perceived loudness with compression」
This may be a phrase you’ve heard before.

After previously taking a look at「threshold」and「ratio」,
we will take a look at「loudness」.

Loudness refers to「the volume being loud」,
but if it goes over「0」on the fader the sound will distort. 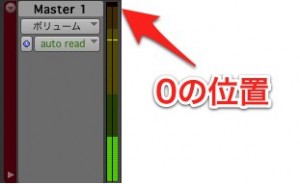 ↑ refers to volume going above here

Because of this rule:

Both professionals and amateurs
「have a limit to how loud their song can be」.

So what makes a difference?

It is the 「density of the sound」.

Compare the sounds in the two pictures shown:

What did you think?
Both of them are set to peak at the maximum「0」.

However, the second sound would have sounded louder.

When looking at the picture,

The attack volume is the same,
but the rest of the waveform is quite different.

The space that the waveform covers makes a difference in the perceived loudness.

With this in mind, we will go back to the topic of compressors. 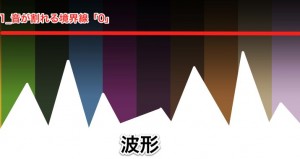 ↑ Lets say we have a waveform that looks like this.

「After raising the volume」 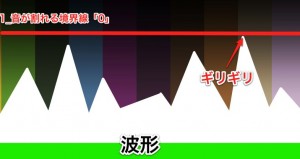 ↑
Raising the sound to the maximum「0」would look like this.
The raised amount is shown in green.

By applying a compressor to this,
it will even out the loudest peaks. 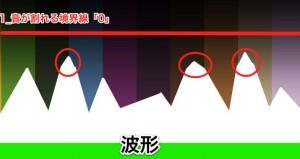 ↑ It will look as shown above. The red circled points have been compressed.

Now there is more room until the 「0」line again.

By bringing this closer towards「0」again – 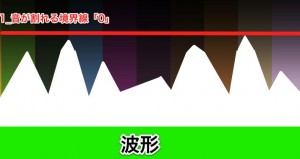 ↑ even more volume has been added (amount shown in green)
There is less「open space」, and the「waveform area」has become bigger.

This is a representation of how loudness works.

In our next article, we will take a look at
controlling compression with「attack」!!