「Release」determines how long the compression is applied
after the sound goes below the「threshold」. 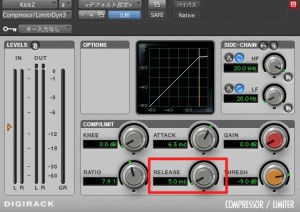 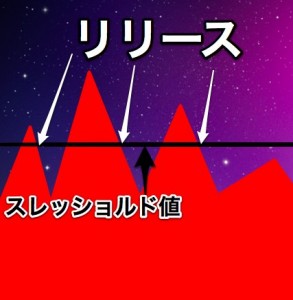 Similar to attack,
it is measured in「ms (milliseconds)」.

If the「release」is set to「100ms」,
even when the sound goes below the「threshold」, the sound will be compressed for an additional「0.1 seconds」.

Why release is necessary

There is an importance in setting the release.

When the sound goes back below the「threshold」,
if the compression suddenly disappears, there is an audible difference in sound making it「very unnatural」.

The goal is to make this change unnoticeable.

Think about it as aftercare for a compressor.

Adjusting the release to control the「distance and sound tail」
are well known methods. 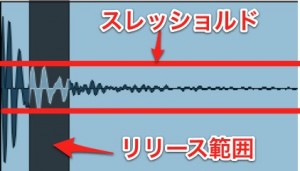 Because the「compression」is quickly released, it provides a clear distinction in sound.
When you want the dynamics to stay prevalent in a track, keep the release「short」.

Lets try a longer release next. 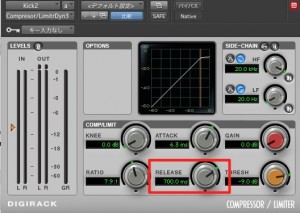 ↑ The area in black is the release「700ms」area.
The「release」is carried over into other sounds.

The sounds become quite flattened.
When you want to even out dynamics, and keep them at similar volumes, set the「release」to「long」.
When you want less dynamics and even sounds, use this setting.

↑ Because the volume of the kick goes to nearly「0」before the next kick comes in,
the「compressor turns off」, but –

The compressor will remain active the entire time.